exhibition
Alexander Gorlizki, Your Eyes, So Beautiful, Like Washing Machines (But Not As Big) 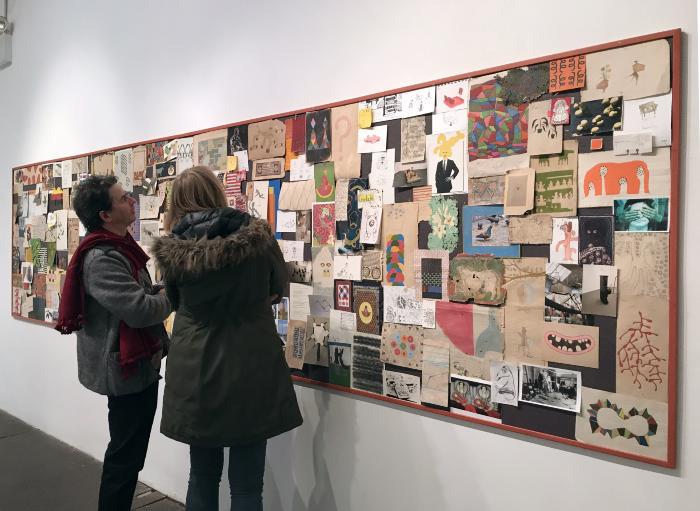 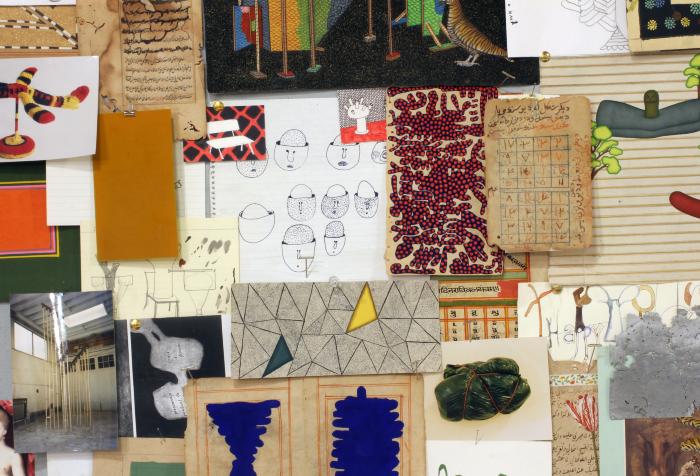 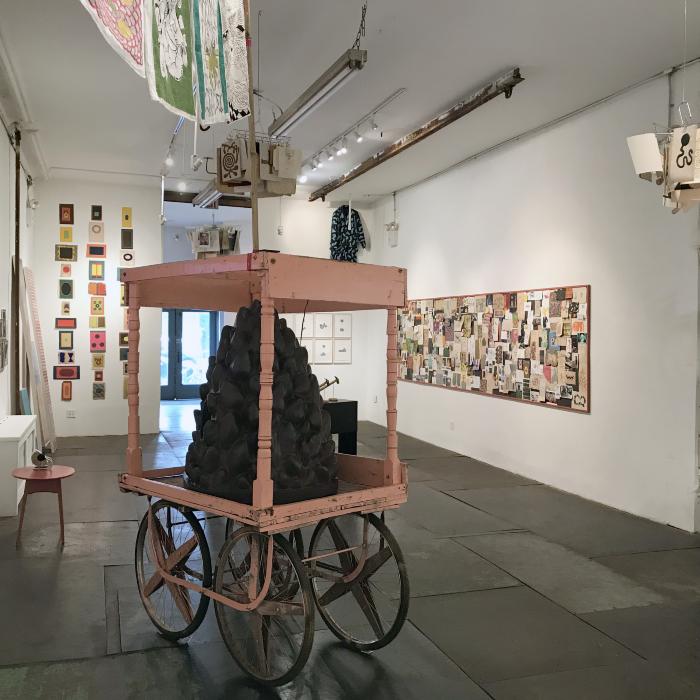 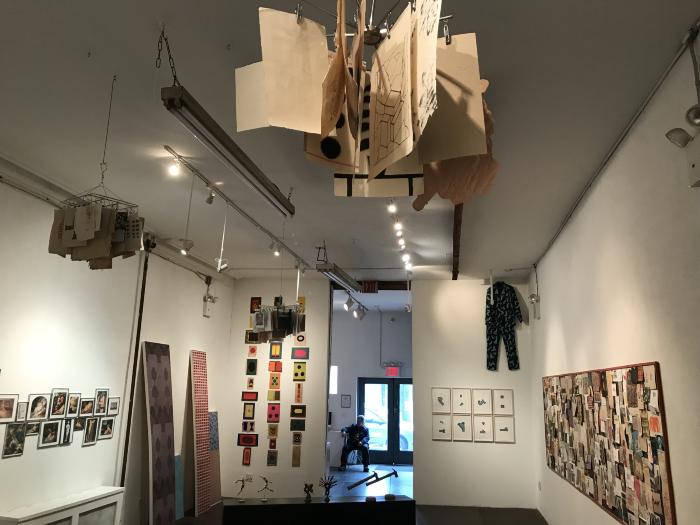 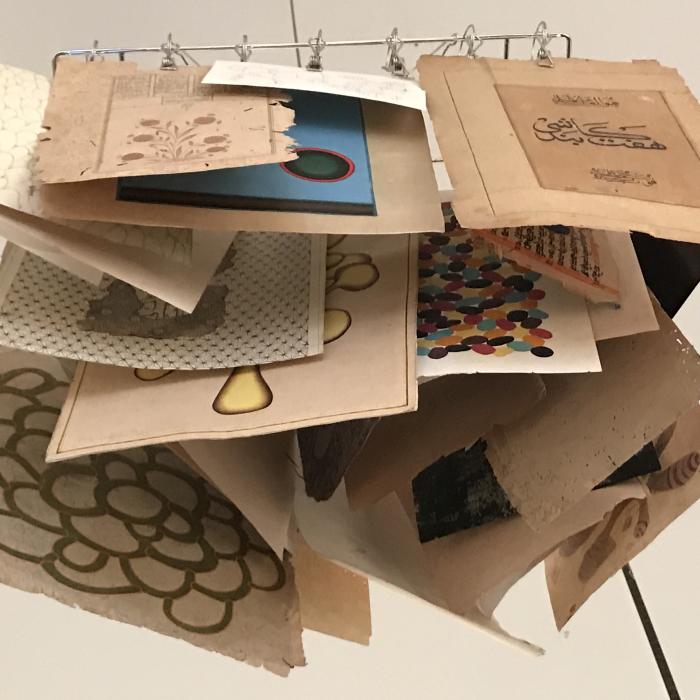 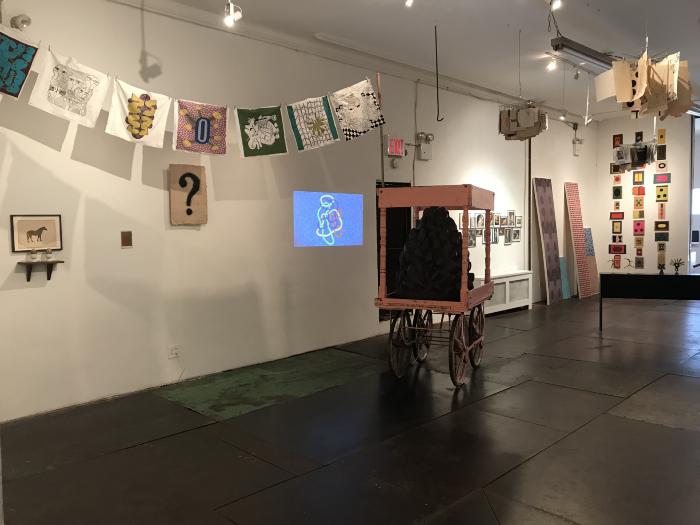 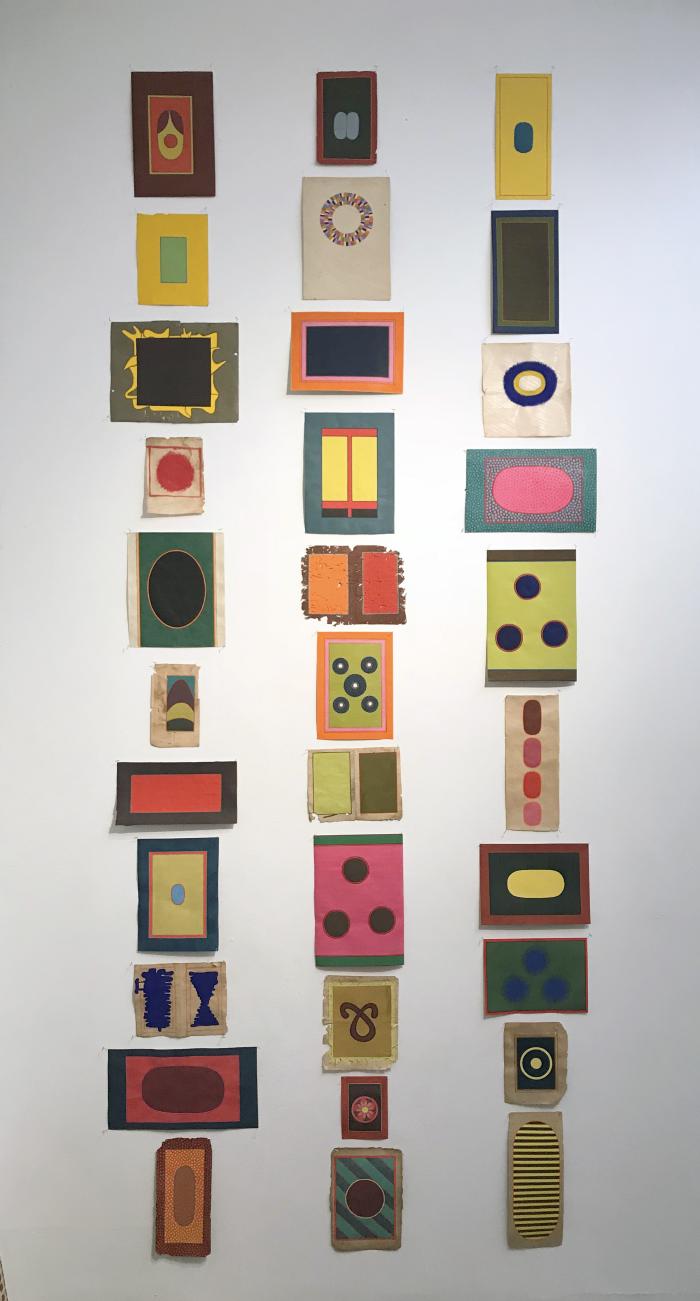 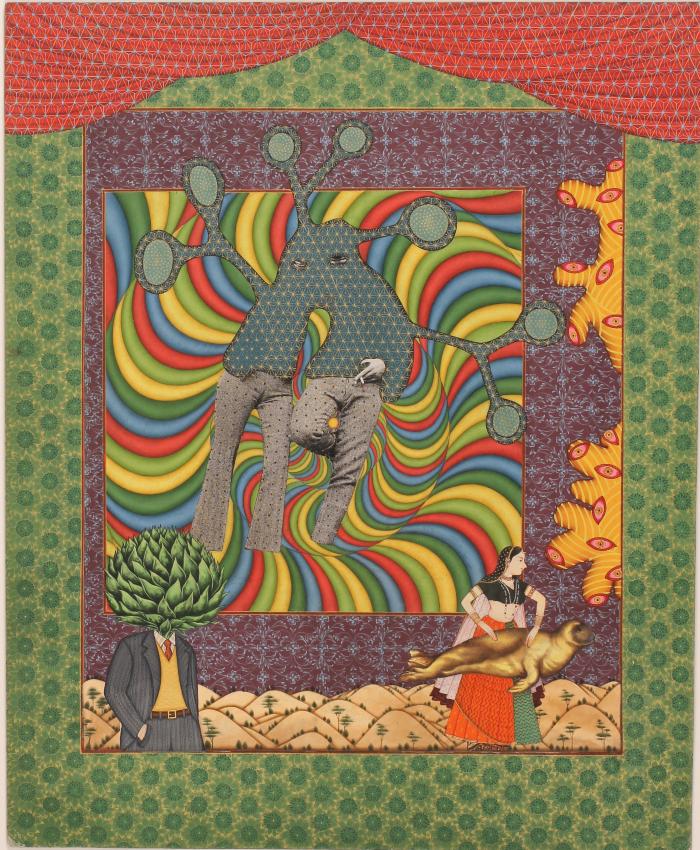 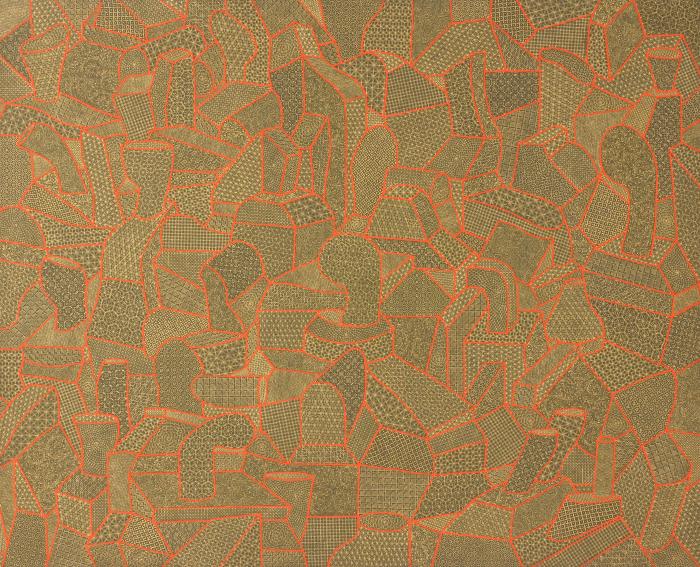 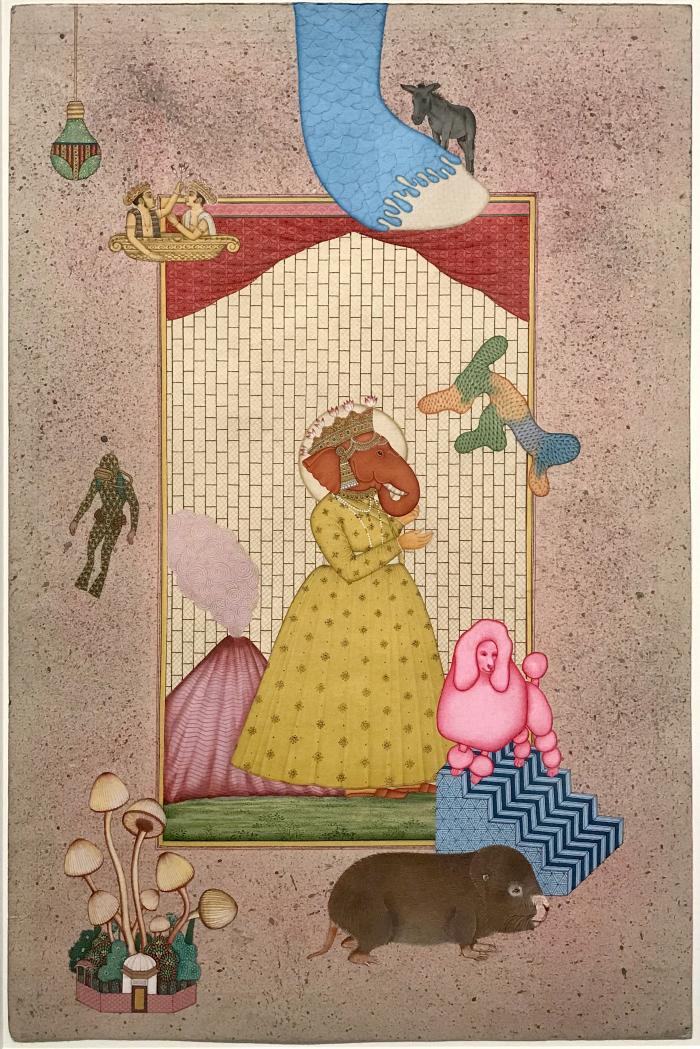 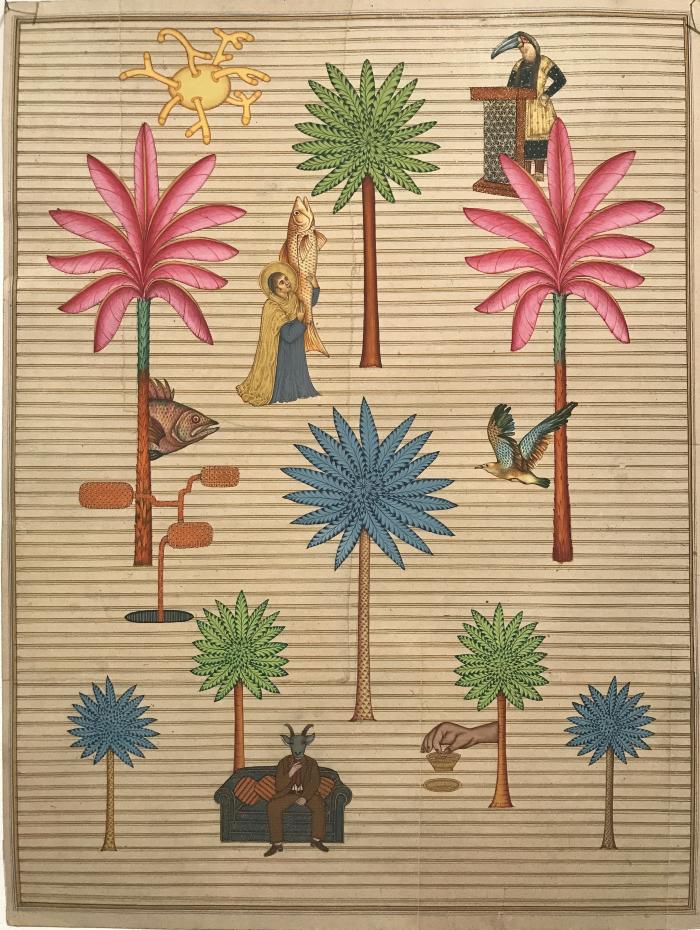 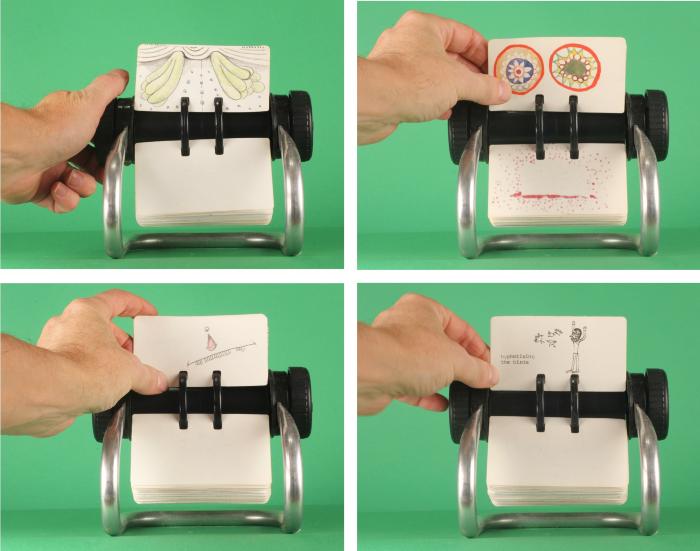 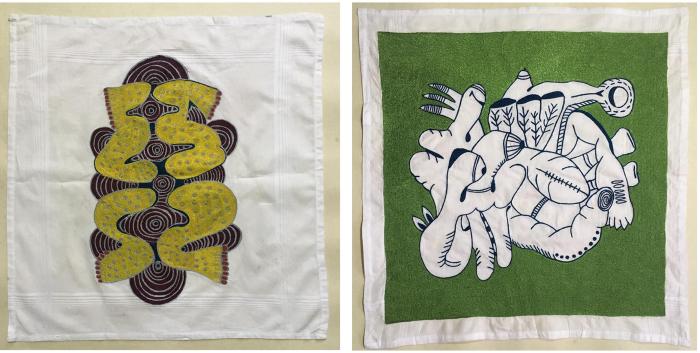 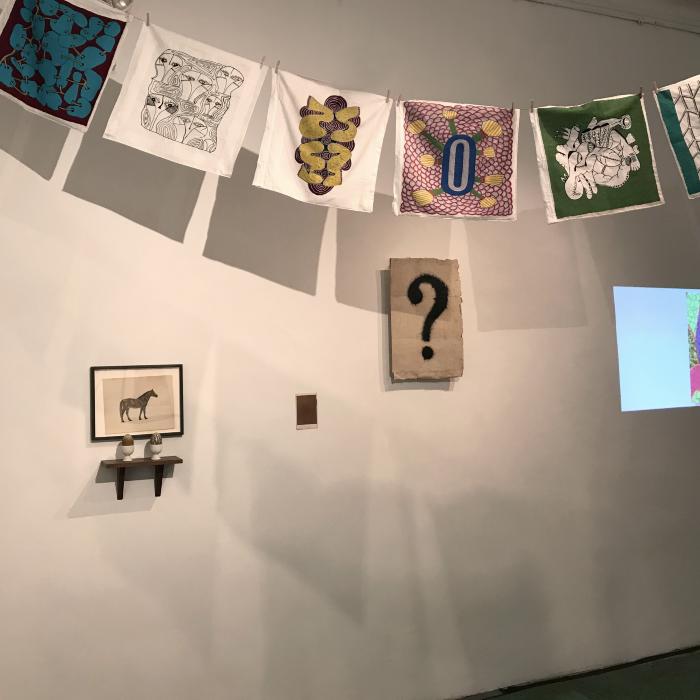 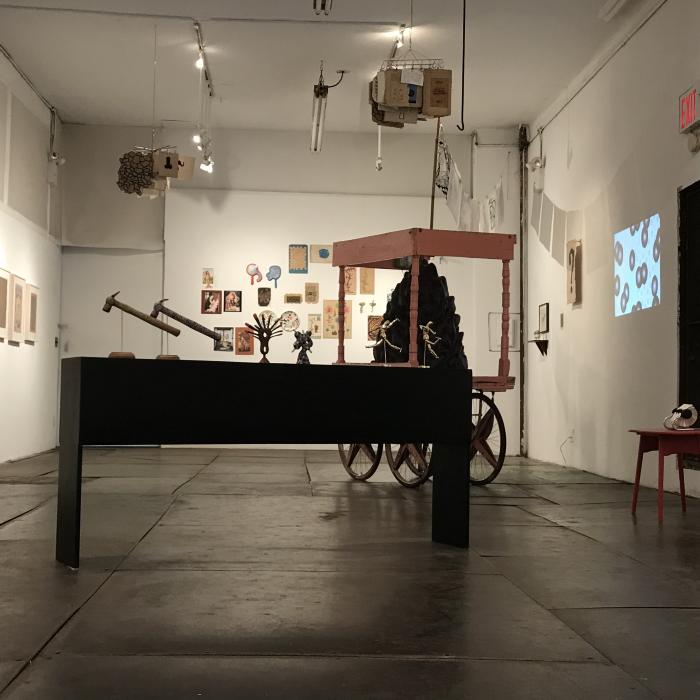 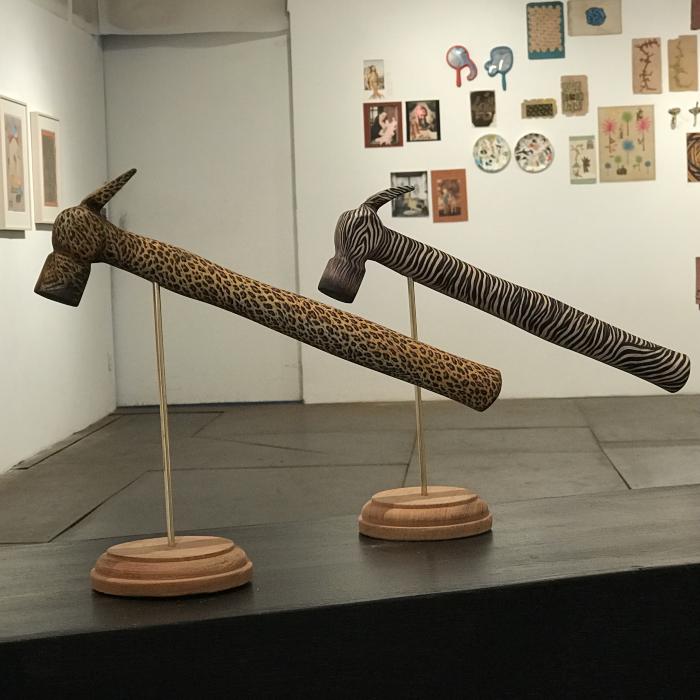 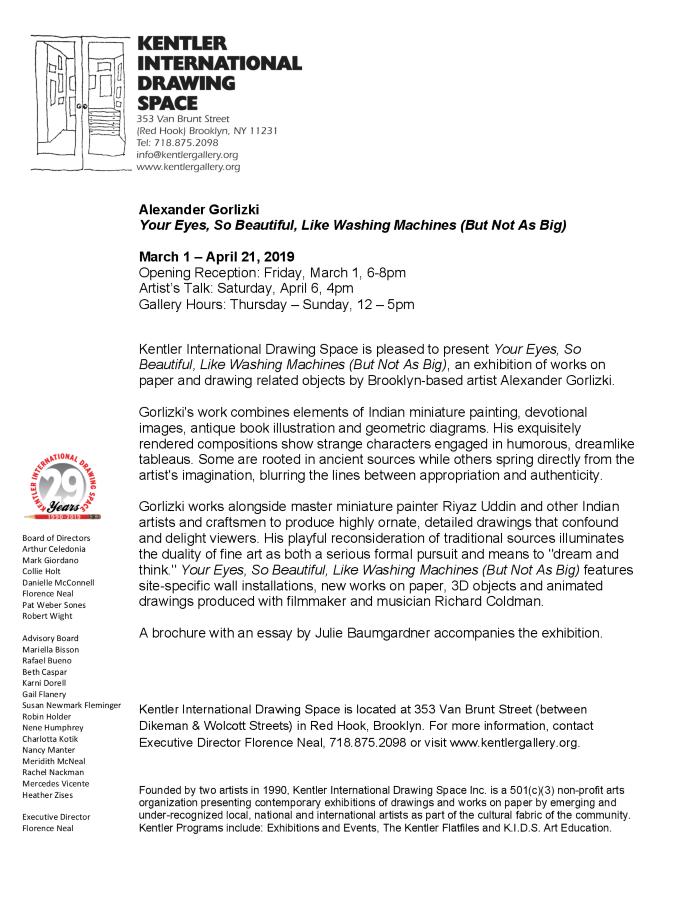 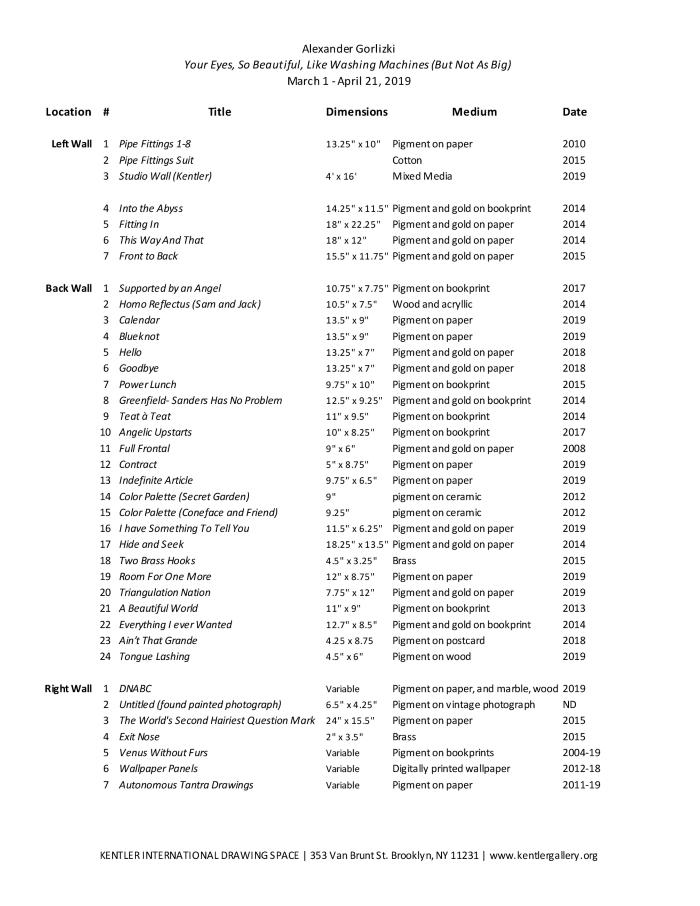 Alexander Gorlizki, Your Eyes So Beautiful, Like Washing Machines (But Not As Big)

It’s difficult to contain Alexander Gorlizki. His studio barely can. But whether he creates markings of magic or  lives within them (and is just passing along the knowledge), well, that’s the great question. “I don’t really believe in originality,” Gorlizki mutters. That, of course, is ironic as his prolific practice centers around drawing that moves beyond drafting to couture, embroidery, collecting, design, sculpture, and video, and his poetry and philosophy can hardly be bound by much. Or even simply explained. There are a few principles that like a corkscrew spiral emerge time and again, but aesthetic ticks or tropes? With Gorlizki, it’s more about what’s inside. Magic is a word that floats around him and it’s not  hard to understand why the mystical and divine attach to his creations.

Gorlizki never strayed too far from his nomadic roots. An artist who arrived in New York from England, having also spent a number of years, off and on, traveling in Central Asia, Pakistan, China, Tibet, and India, Gorlizki’s own journey has been guided by the most sumptuous visuals. Turkoman rugs, piled high market spices, goats in sweaters. These are the artifacts of Gorlizki’s memories that can be sited as foundational to his artistic language. They’re not just memories, but also everyday interactions. He’s maintained an atelier in Jaipur since 1996, where he works with the master Indian miniature painter Riyaz Uddin, as well as a number of other exceptionally gifted artisans in the Old City—sari embroiderers, sand-casters, marble and wood carvers, and tinsmiths among others.

If originality per se isn’t relevant to Gorlizki, he is captivated by the possibilities of new connections. Art director or alchemist, he conjoins skills, traditions, and approaches to art and craft. Gorlizki seemingly leans into the mantra “Add it to the mix and (hopefully) be surprised at what comes out.”.

Of the many ingredients of this free association are the Indian tantric, antique, and vernacular drawings the artist has collected over the past two decades. What’s come to be known as the “Magic Markings” collection includes cosmological maps, divination and healing diagrams, and yantras, or tantric visual guides used for meditation and prayer. These take up plenty of space in the studio, and the imagery has inevitably sprouted in the artist’s own work.

Enter into Alexander’s world with its layers, textures, and colors, and nary a free space to hang any more drawings or nest his sculptural objects. His studio is a rare physical place that is at once obvious in seeming like any regular space for play while also being an alternate universe. “The studio is a repository of what happens when I’m drawing,” he says. Gorlizki’s large drafting table is central to his mainstay occupation (for “drawing is a way to think and dream,”) and might be the most familiar object in the place. In contrast, smack in the actual center of the studio he’s placed a Babylonian-like gate, wallpapered with the eyes of the Hindu God Jugganath and a cutout amorphic doorway (a male’s member?). How’s that for an obvious threshold?

But if you’ve ever encountered Gorlizki’s works before, you’ll know nothing is what it seems. Casual looking belies both his puns and whispers of superstition. That’s another lesson to be learned when engaging with Gorlizki: look deeper, and find a clue to the mysteries of the interior. And guess what? Life is truly a little goofy.

The title of this show “Your Eyes, So Beautiful, Like Washing Machines (But Not As Big)” certainly doesn’t do much to suggest otherwise. The phrase arrives from a love poem Gorlizki wrote many years ago, and he was surprised to hear that a laundry device might not be the most romantic metaphor. “Really?” he asks, puzzled. Artists are artists because they see the world without the burden of convention or an obligation to Truth, with a capital t. As wrote Indian painting scholar B. S. Goswamy in The Spirit of Indian Painting, artists are even “completely at home with the notion of time as manipulable and elusive.”

Gorlizki often evokes the primordial, containing incantations of ancient beliefs and the personification of otherworldly spirits, wafting, ethereal entities. But the abstract symbols, minimal geometric forms, or dissonant intersecting patterns that point to the sublime are often tempered by Gorlizki’s own devotion to the absurd and askew. His drawings and paintings are brimming with puns and flipped narratives: a man with a beak for a mouth, a figure riding on the back of a seal and wielding a potato masher, an elephant looking in the mirror and seeing a duck reflected back. It isn’t easy to make sense of or tie together these divergent paths and maybe we shouldn’t even try. “I have many drawing styles so I often don’t know what’s going to come out,” Gorlizki says.

Scattered all across Gorlizki’s studio walls, and piled in stacks on most of the horizontal surfaces are hundreds of drawings of various styles, origins, and histories. Most are rooted in the Indian miniature tradition, the work Gorlizki produces with Riyaz and a small team of assistants, with their infinitesimal lines and perpetual patterns, jewel-like stone colors, and crushed gold, applied with single-hair-tipped brushes. These are interspersed with the tantric and antique devotional drawings and the artist’s collection of antique paper (he’s a self-described paper fetishist), and it’s hard (impossible?) to know what’s “authentic” yet alone who did what. “Copying has always been a learning tool but it also slips in and out of the forger's art,” which is a tradition Gorlizki holds in high esteem. He once worked with an Afghan caster who specialized in fakes to produce 2,000-year-old patinated bronze Sesame Street characters and he continues to play and prod at the sanctity of authenticity, authorship, and appropriation.

"Devinera qui pourra." He who can will guess. Gustave Courbet mischievously tossed that apple out to a discerning crowd when he unveiled “The Painter’s Studio: A Real Allegory.” The artist’s lair no longer was secret but now a mystery to unravel. Courbet not only set forth the art stunt model that shook up knowledge systems, but also the idea that the workspace of an artist is itself another universe outside of quotidian existence and societal structures. All the interior activity leaves its stain. Therein is a space to play, a space to enter other worlds, a space to collect energies from the people who come through and manifest the objects that remain.

All these drawings hang, all these markings of magic, as Gorlizki’s mental map of creation. Just as with the spatial plane in miniature paintings that looks, as Robert Hughes once wrote, “past the edge of the ordinary world into a privileged domain,” so follows Gorlizki’s own immediate studio.

- Julie Baumgardner has long traveled the world to write about the arts and culture for publications like the New York Times and the Wall Street Journal.