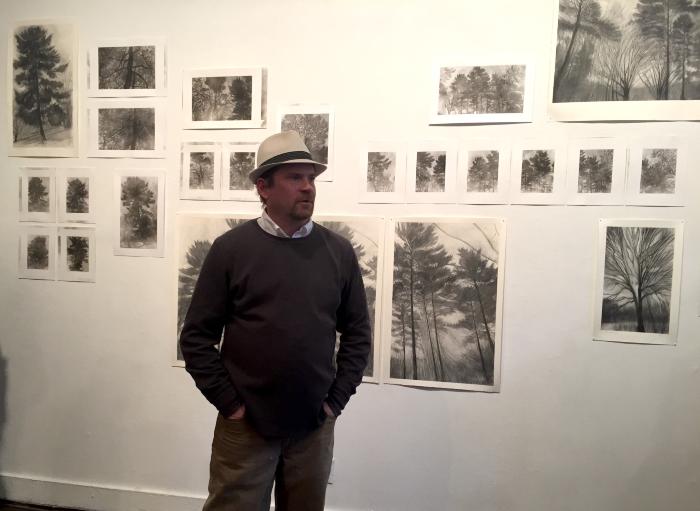 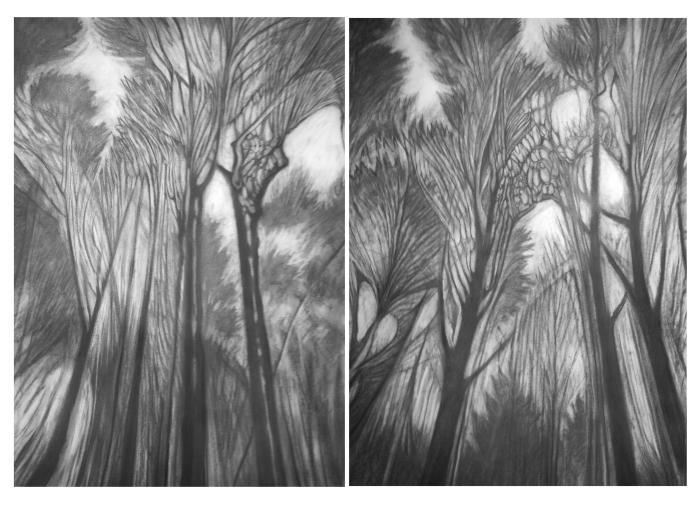 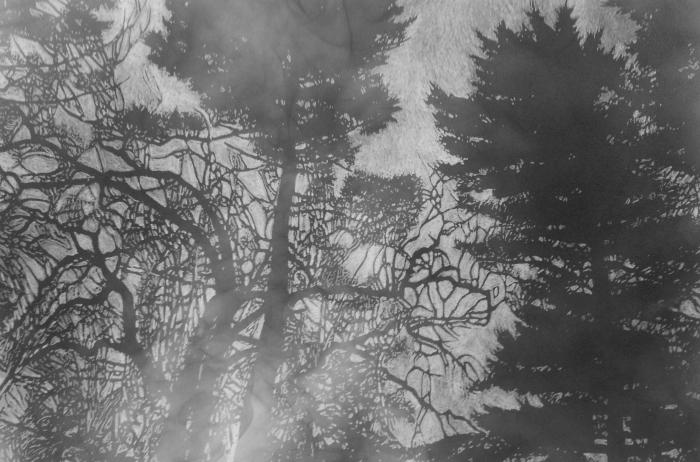 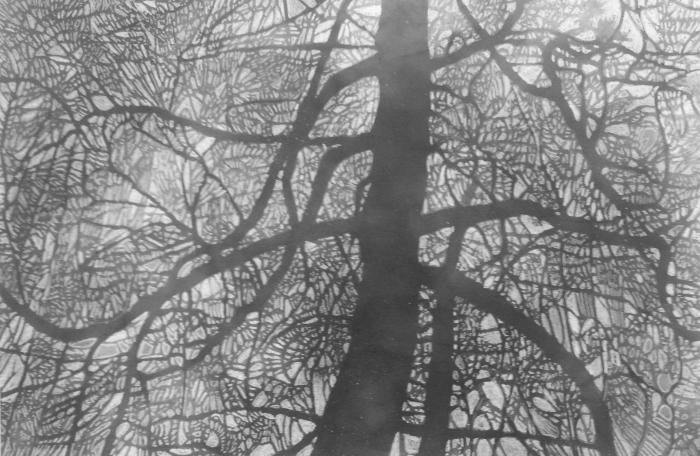 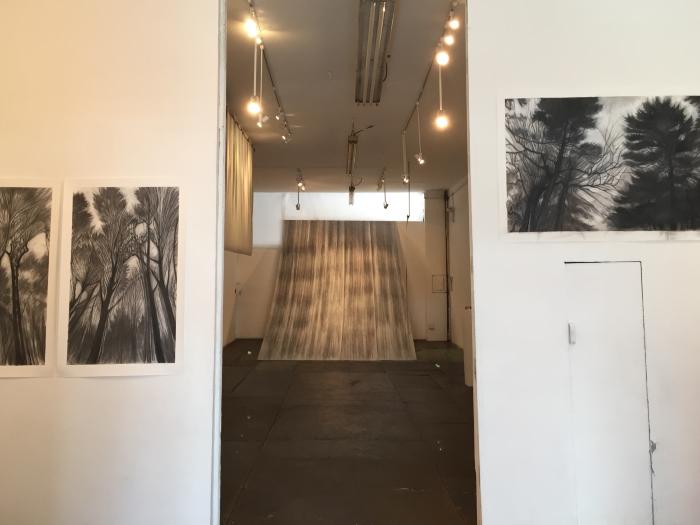 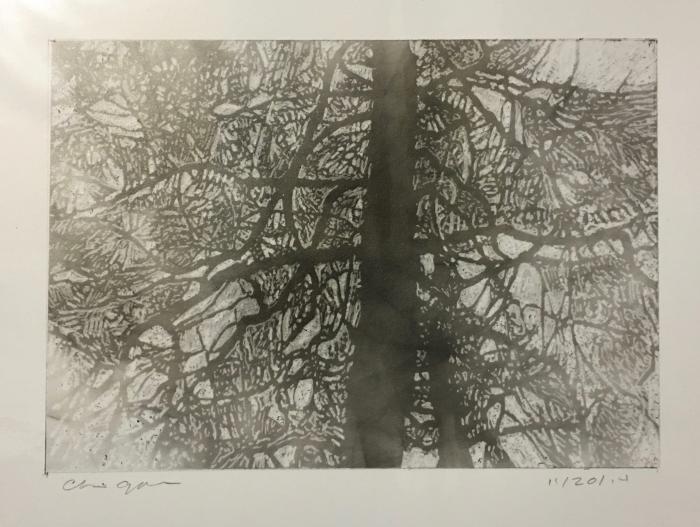 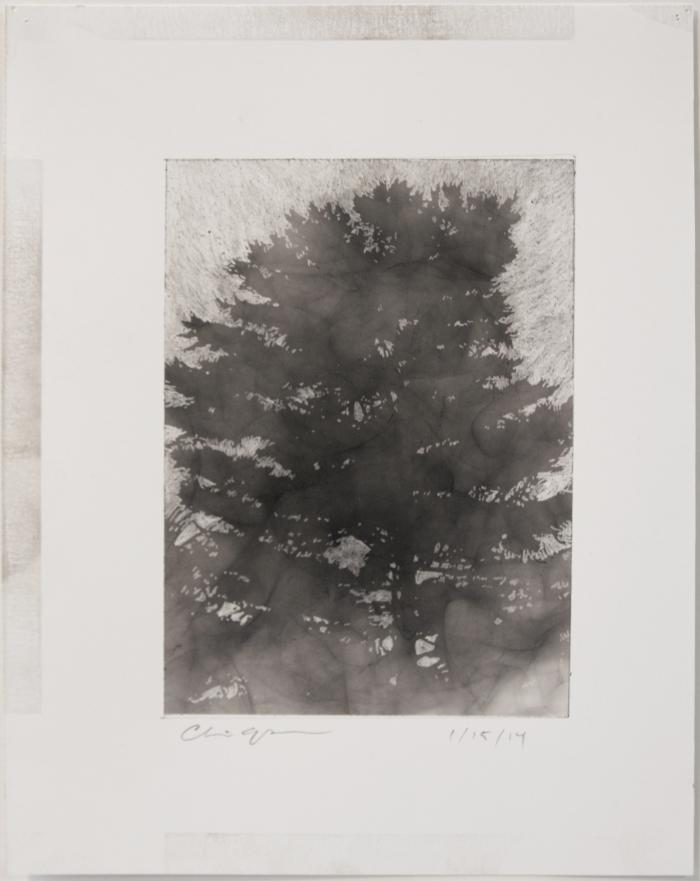 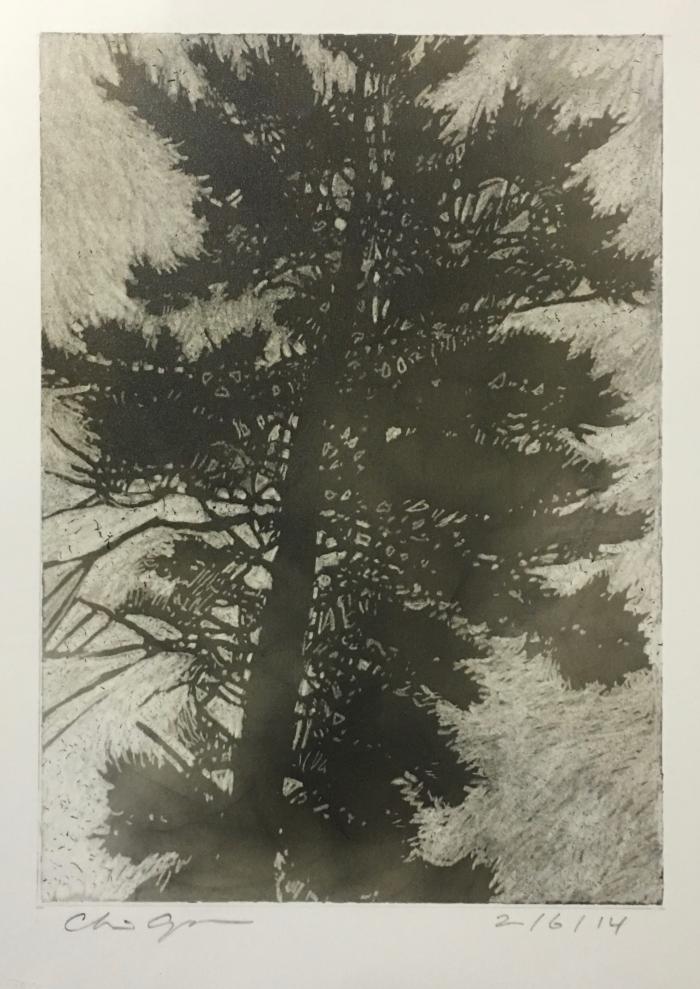 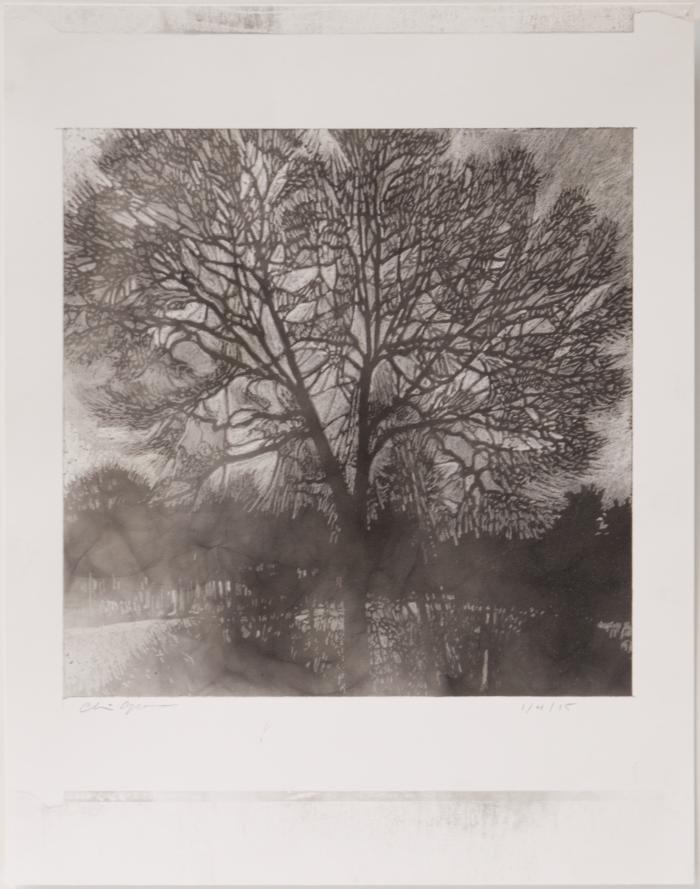 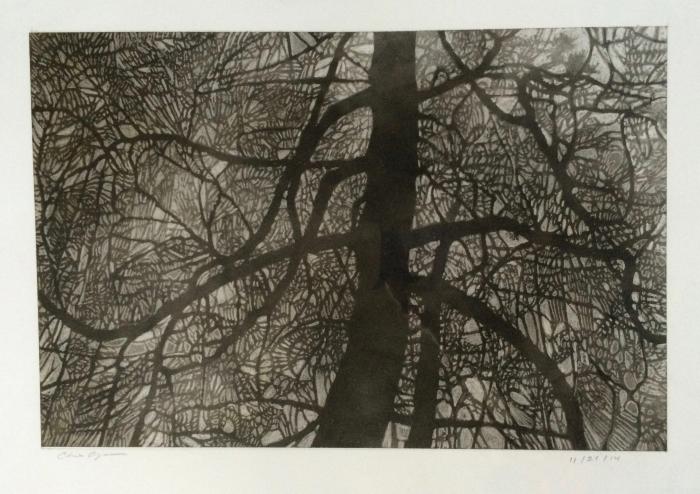 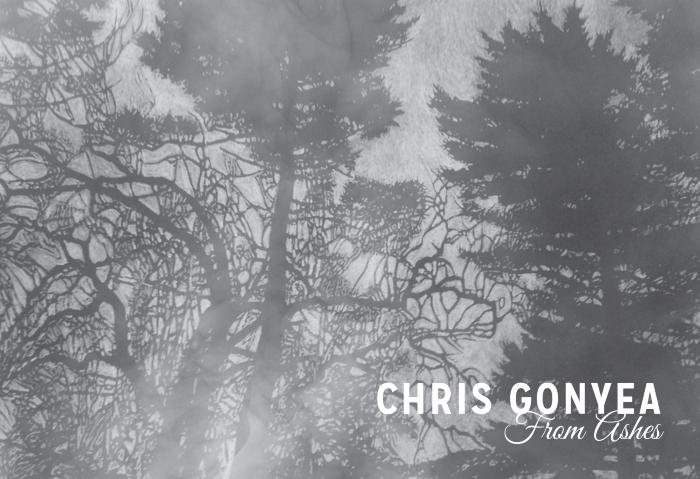 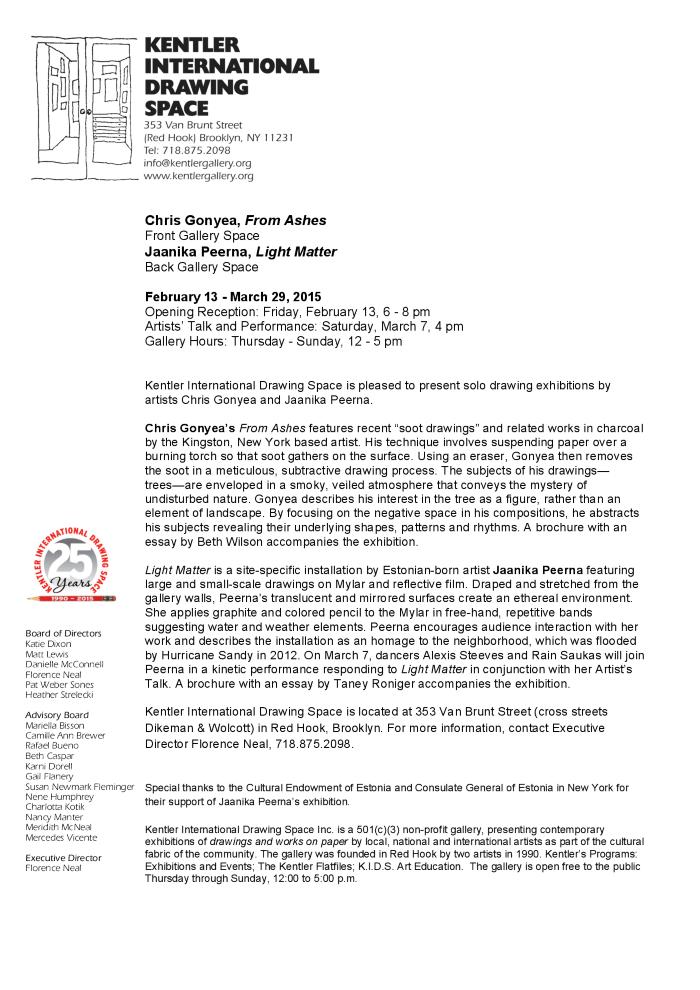 “There should be something ambiguous about the visual,” Chris Gonyea tells me during a visit to his Kingston, N.Y., studio. The drawings in this exhibition evince the truth of this proposition, as they seem constantly on the move, shifting their allegiances between representation and abstraction, presence and absence, nature and culture—in the recent, intimate soot drawings, and in the larger, panoramic charcoals, the semiotic dialectic between the hand of the artist and the mechanical imprint of the indexical are patiently embraced and deconstructed. In an era when the heroic, elemental act of mark making seems to have become a modernist, historical anomaly, Gonyea presses on to engage and tease out both the delights and the frustrations that drawing continues to afford.

In his early career, Gonyea was primarily an abstractionist, making paintings that included collage elements that have been described as “industrial assemblage in high relief.” A graduate of the Pratt Institute, his art was strongly influenced by the heterogeneous approach of predecessors such as Schwitters and Rauschenberg, exploring the disjunctive logics of those artists with greater emphasis on form, and less on reference. He continued in this vein even after returning to his hometown of Kingston in the early 1990s, but eventually this native environment—which had originally lured the Hudson River school painters of the 19th century—inspired a significant shift in his style about ten years ago, when he began to focus on the representation of nature, especially trees. These overtly representational drawings and paintings extend the same basic concerns about medium and materiality that had informed his earlier, abstract work.

Gonyea’s tree studies, based on photographs of stands of actual trees, in actual places (often literally in his own Hudson Valley backyard, or in other places he’s spent time, such as Martha’s Vineyard) share a sense of rootedness in a specific place that characterized Cole’s and Church’s work of 150 years ago, but they are not products of the Romantic Sublime; if anything, they embrace the contradictions of life today in a way that would have literally been unthinkable for those historical painters. Drawing on the energy of the earlier, abstract work, the repetitive patterns of branches and foliage take on a formal significance of their own, which the artist characterizes as “geometrical or rhythmic, patterns that are more the subject than the tree itself at times.” On a fundamental level, all of Gonyea’s work is abstract, but by melding that abstract sense with the familiar hook of the natural motif, he opens the door to a wider audience, and even wider possibilities of potential meaning.

Drawing is often seen as the ultimate, elemental trace of the artist’s hand, the simplicity of the materials and the process conjoining to underscore the presence of the hand and the eye producing it. In his soot drawings, Gonyea subverts all of these assumptions. The process involves catching the carbon from a dirty flame, as he passes the paper over the rising column of smoke—in some of the drawings, one can discern the ephemeral feathering of the soot on the surface, which makes certain passages appear to come in and out of focus. Once coated in this way, he sets to work with an array of erasers, removing the areas left whitened (the negative space of the drawing), often in fine detail. By necessity, the soot works are relatively small, and involve a tremendous amount of fine detail work with the erasers, but ultimately both serve to draw the viewer into a particularly close, intimate relationship with the image, heightening one’s sensitivity to the surface texture and materiality of the work, the abstraction generated by the pattern of the branches and an almost hallucinogenic oscillation between figure and ground. The process is exacting and labor-intensive, and does not allow much possibility for correction. Some works demand a second or third exposure to the flame, in which case all the previously erased passages need to be re-erased, as the subsequent deposits of soot refuse to respect the work already invested by the artist.

The semiotic logic of these soot drawings is ingenious—note the language Gonyea uses to describe them, in terms of “exposures,” and our reading of the effect of images appearing in or out of focus. There is, in fact, a very photographic quality to the work, beginning with the process of collecting soot over the flame, in which the rising column of heat and smoke makes its mark on the paper. The surrealists developed just such a technique for indexical/automatic drawing, called fumage, but they stopped at this stage, content to find evocative imagery in the random licks of soot that could only be minimally controlled by the artist. The indexical element remains in Gonyea’s work, but it is then deconstructed, literally undone by the erasures, which call to mind another historical precedent, namely Robert Rauschenberg’s famous Erased de Kooning. It raises a fascinating philosophical conundrum in the process: What is presence and what is absence here? Where does the sign (which is doing the representing) begin, and where does it end? Gonyea fully embraces both sides of this contradiction, and it is impossible to put a definitive end to the interlocking logics involved. |

The innate complexity of the soot drawings is compounded when Gonyea produces them in series. One relatively large drawing will essentially reproduce the visual information of the photograph used as a source image; it is then accompanied by a series of smaller drawings, each presenting an isolated fragment of the same overall image. Each drawing stands on its own, but seen in relation to its siblings, they function cinematically as individual close-ups for which the larger work acts as a master shot. In this way, the drawings as a group engage issues of temporality as well as the photographic/indexical. In this regard, the fact that the titles of the individual drawings are simply the dates on which they were produced contributes an additional, subtle clue.

The soot drawings are paired in this exhibition with a number of works executed in charcoal, using a more conventional drawing technique, heightening the complex of meaning invested in both groups of work. The charcoals are much larger in scale, providing a panoramic experience that contrasts with the close intimacy of the soot works. Hanging alongside each other, the conceptual oscillation between the reductive (negative) technique of the soot drawings and the additive (positive) buildup of marks on the paper in the charcoal drawings creates a unique tension, one that neither body of work on its own would contain. The pure, conceptual form and pattern that emerge through the repetition and replication of nature in these drawings invites the viewer to hover somewhere in the critical zone of ambiguity between nature and culture.

The title of the show, From Ashes, calls attention to the medium in play in both the soot drawings and the charcoals—deposits of carbon on paper, a description that begs the true depth and complexity of the conceptual, artistic work that this deceptively simple material enables. These drawings pull the sensitive viewer along, in almost imperceptible steps, from the recognizable, straightforward representation of landscape to a deeply altered, abstracted state (and then back again). The path charted by Gonyea through both literal and conceptual thickets here rewards attentive looking—and thinking—in a way that is as refreshing as it is rare.

—Beth E. Wilson is an art historian, critic and occasional curator. She is currently a lecturer in art history at SUNY New Paltz.