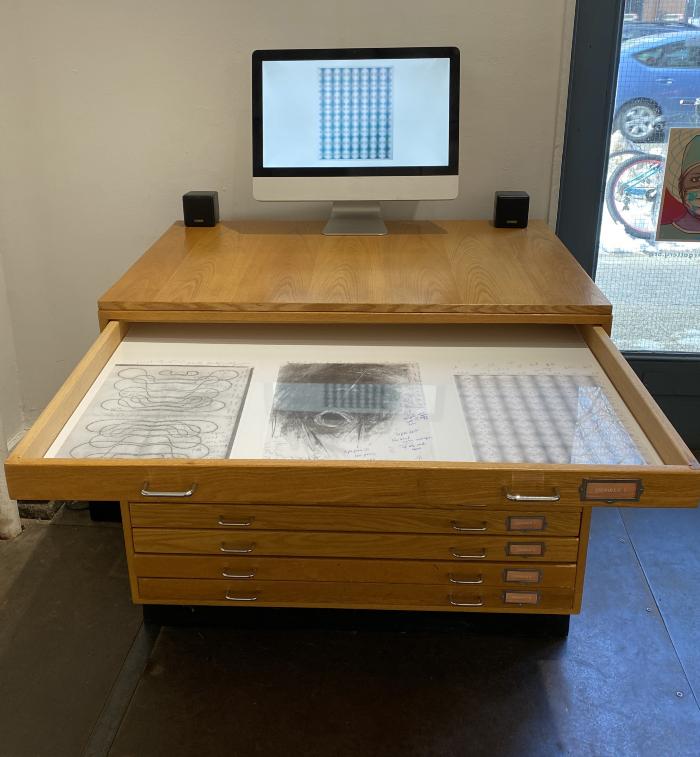 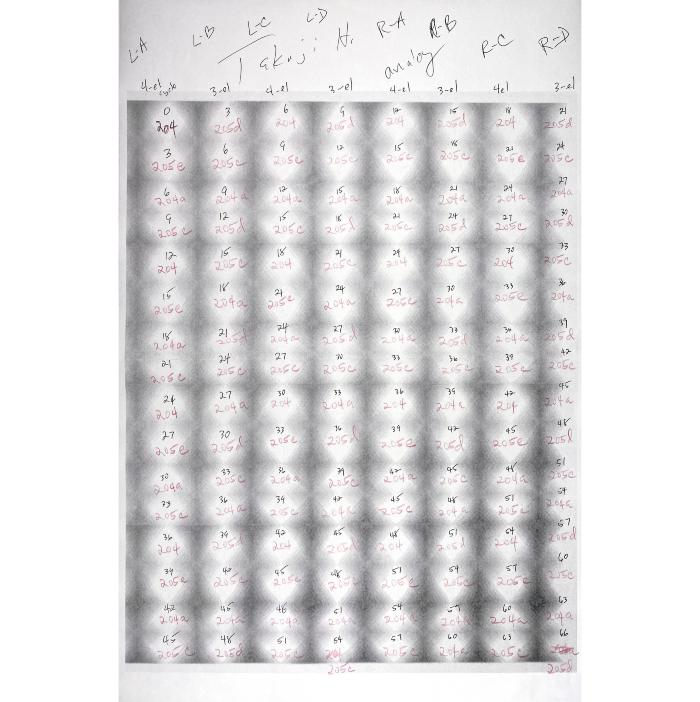 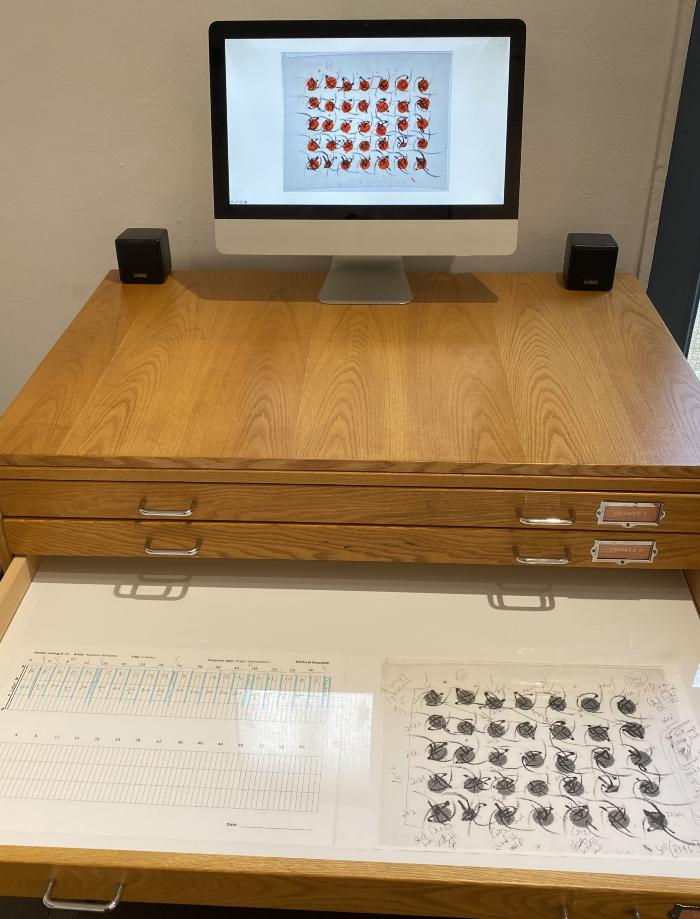 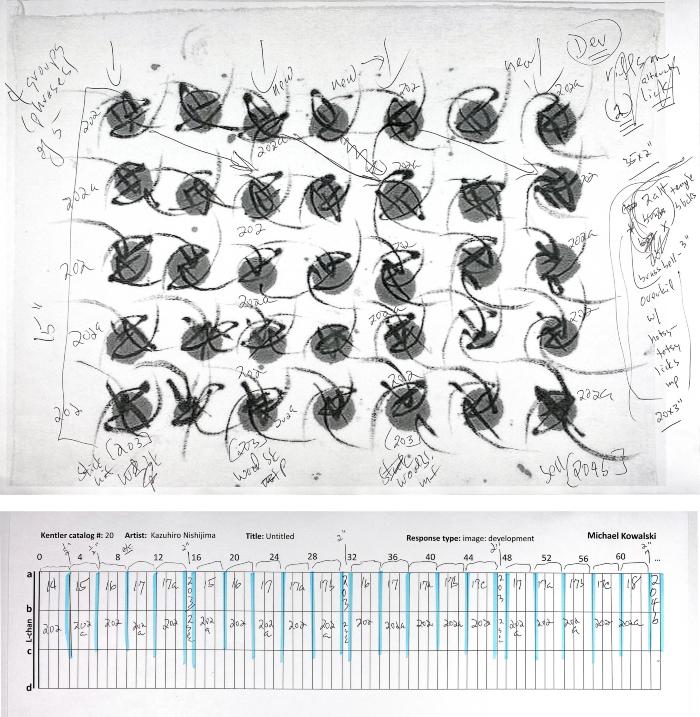 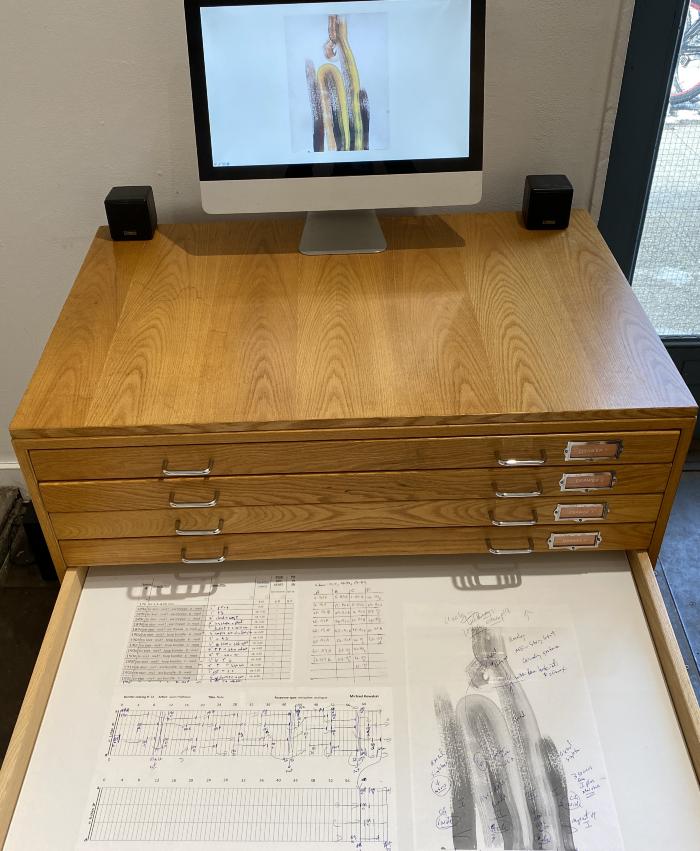 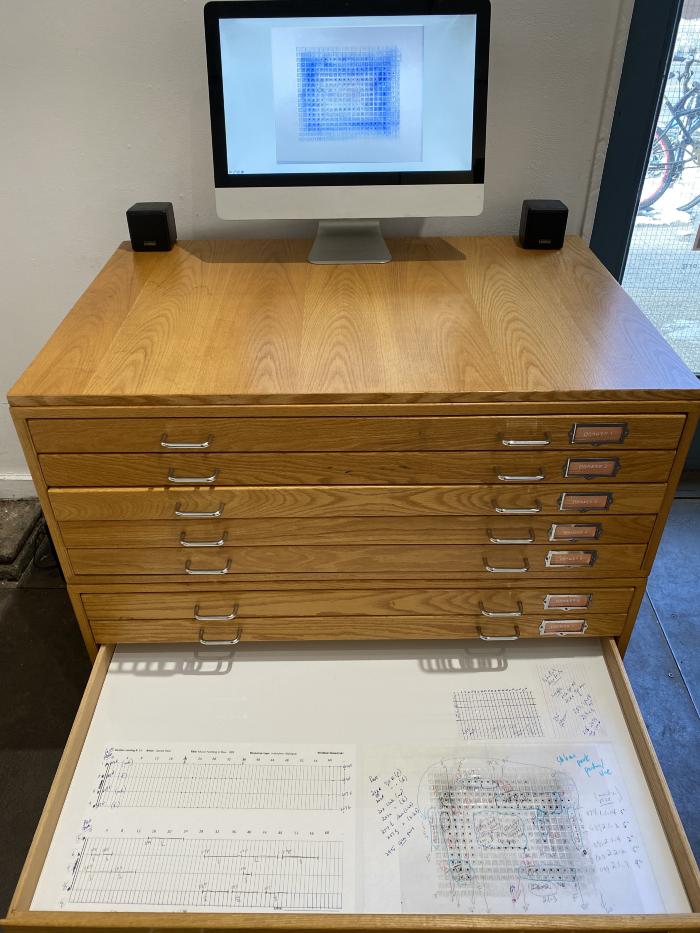 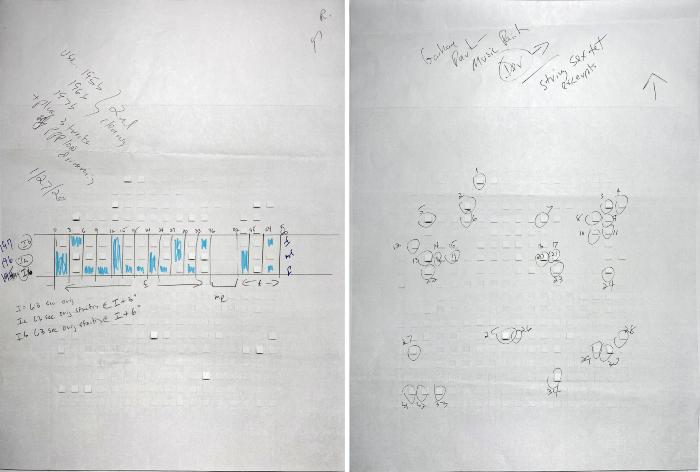 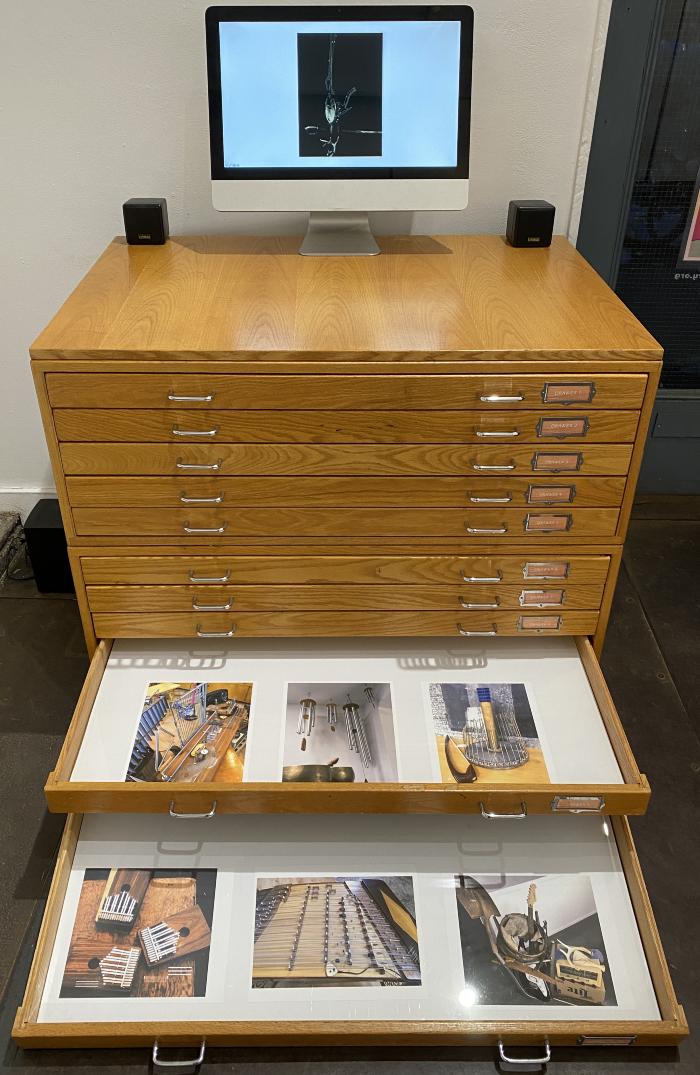 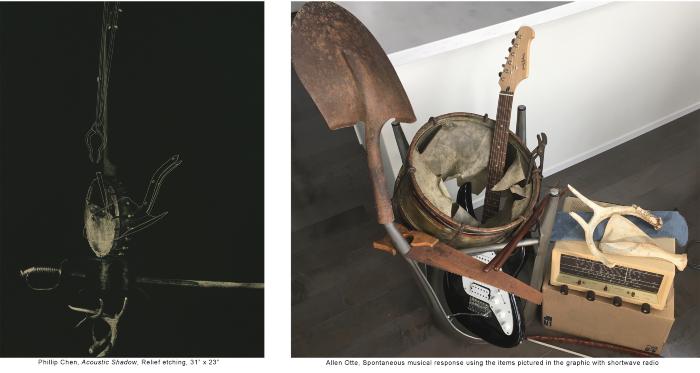 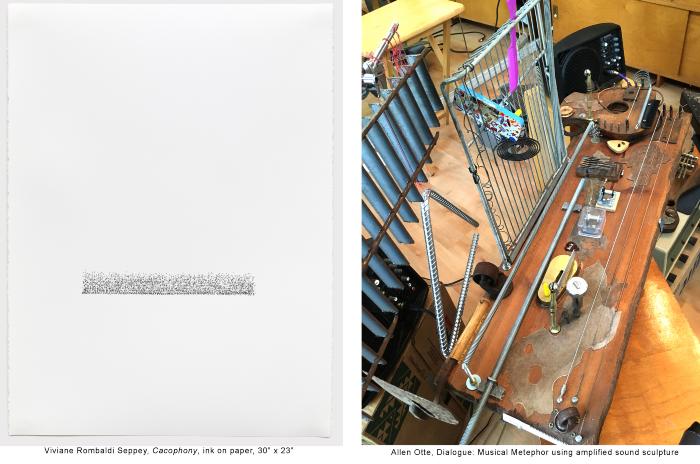 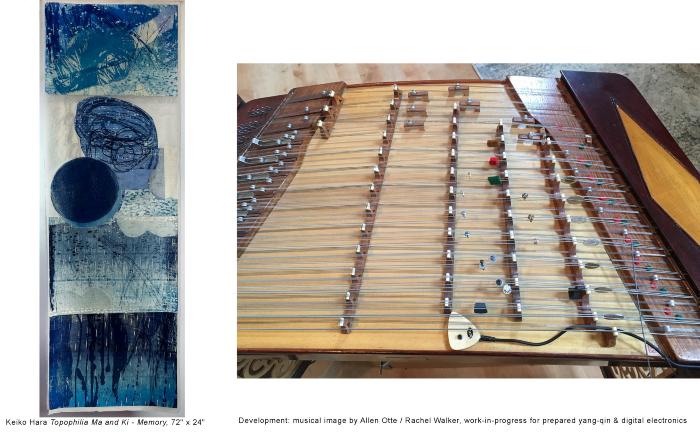 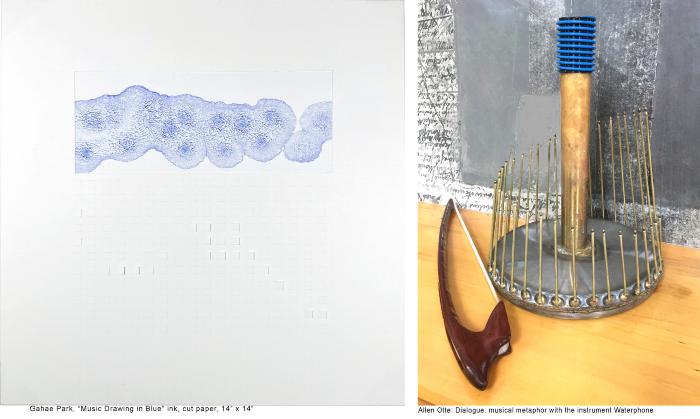 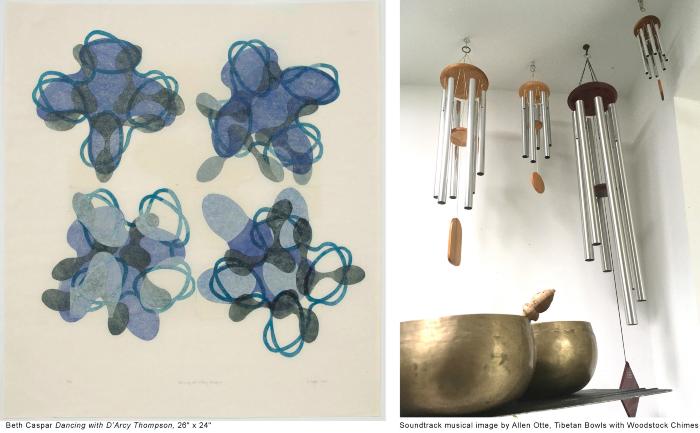 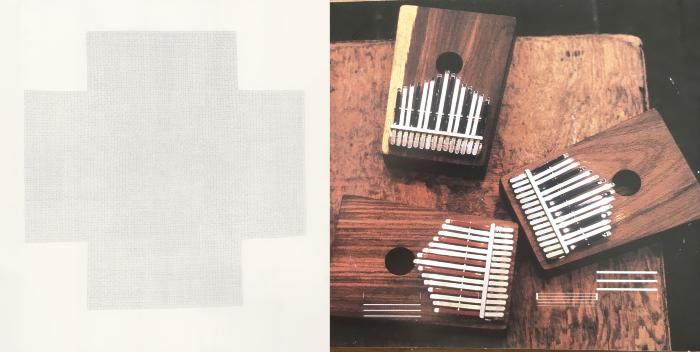 Musical Responses to the Kentler Flatfiles
Traveling Exhibition:
MUSIC AS IMAGE AND METAPHOR
at the Bartlett Center in Columbus, Georgia
January 22 - March 20, 2021

ON VIEW at Kentler International Drawing Space
in conjunction with the exhibition
Variations in Black & White / MUSIC AS IMAGE AND METAPHOR
February 5 - March 20, 2021


MUSICIANS' NOTE:
Back in the 1970s there was a brief fad of musical improvising based on spontaneous reactions to just about anything: the phone book, imperfections on a piece of paper, elaborate collages of hieroglyphs that suggested standard musical notation but couldn't be read as such, etc., etc., . . . you get the idea.  It all became very predictable very fast.  As Stravinsky noted in his Poetics of Music, productive freedom is more often to be found in the observance of rigorous constraints.  In "Music as Image and Metaphor" we've tried to split the difference between following extra-musical cues wherever they lead and working within strictly musical constraints. There's clearly no single path that leads to such a tricky compositional equilibrium, but for practical purposes, if not necessarily for our own sanity, we settled on three basic approaches to shaping our sonic responses to the works in the show:  imagistic, metaphoric, and unmediated-spontaneous (understood as goals, even if, perhaps, unachievable ones).

The imagistic response groove broke into two specific working approaches:
•    providing a soundtrack, à la classic Hollywood films; or . . .
•    developing musical responses to graphic gestures as if they were the themes in, say, a jazz session or even a Beethoven symphony.

For each artwork we usually tried to make music within just one of the five possible response modes, not so much as a straight-jacket but as a launching pad for our composing and performing.  All of which is to say that, quite apart from revealing how we went about our work—which in a real sense is mere background, we hope that a similar spirit of adventure will inform the viewer's listening.

We've worked in many varied formats over the decades, often at the fringes of musical experimentation, but always with an emphasis on a high level of craft.  Our approach in this instance actually calls to mind a working plan that we employed in one of our first large collaborations, a thirty-minute realization of John Cage's Music Walk for piano, percussion, electronics, and everything-but-the-kitchen-sink.  For the current show we divided the forty graphic works selected by the curators into two sets of twenty and then proceeded to work independently over a period of two months to create our personal sets of musical responses, each one of approximately a minute's duration.  This division of musical work isn't reflected in the arrangement of the show at the Bartlett Center, so the effect in the space is that of a random walk, with our respective musical points of view caroming off the forty graphic works in an unforeseen order.  The resulting suite of forty-plus minutes of music includes work newly composed and performed for this show, excerpts from our respective performing catalogs, and re-arrangements—sometimes quite radical—of  material drawn from earlier compositions.


MUSICAL RESPONSES: listen online
Press the Audio Button under each artwork on the Exhibition Page.


Composer-pianist Michael Kowalski and percussionist-composer Allen Otte have been collaborating on musical projects since the early 1970s.  In addition to his work as a soloist, teacher, and composer, Otte is a founding member of two of the most important multiple percussion groups in the United States, the Blackearth Percussion Group and The Percussion Group/Cincinnati.  Kowalski was a pioneer in computer-assisted sound synthesis and algorithmic composition in the 1970s.  After years of composing primarily for percussion, dance, and electronics, he turned to theatre and chamber opera in the 1990s. Kowalski's "Gringo Blaster," commissioned and premiered by Otte and the Percussion Group/Cincinnati, is available on an Einstein Records CD of the same name.