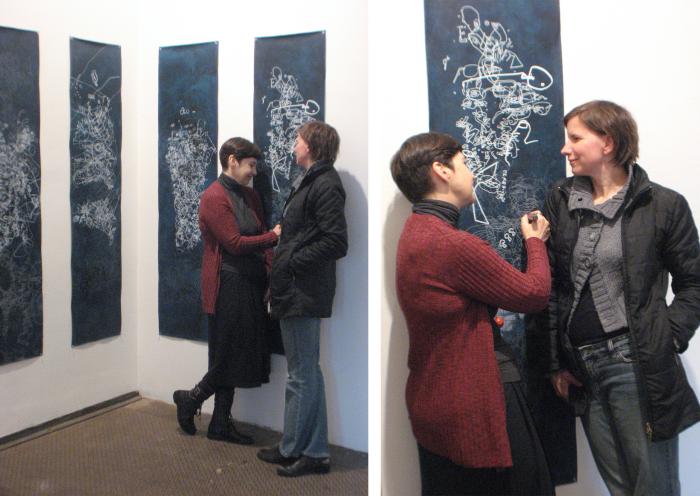 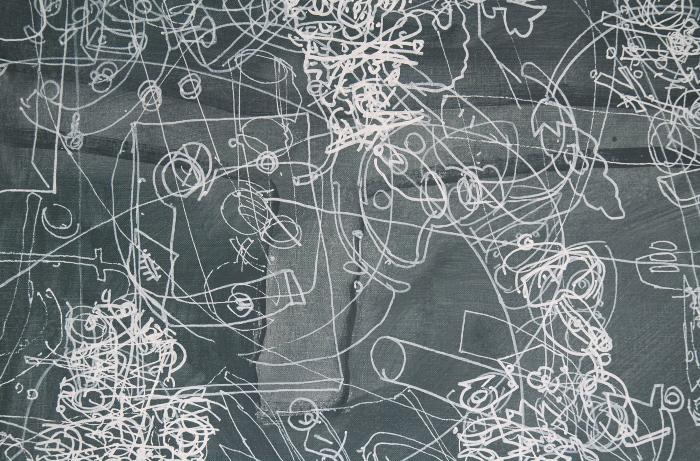 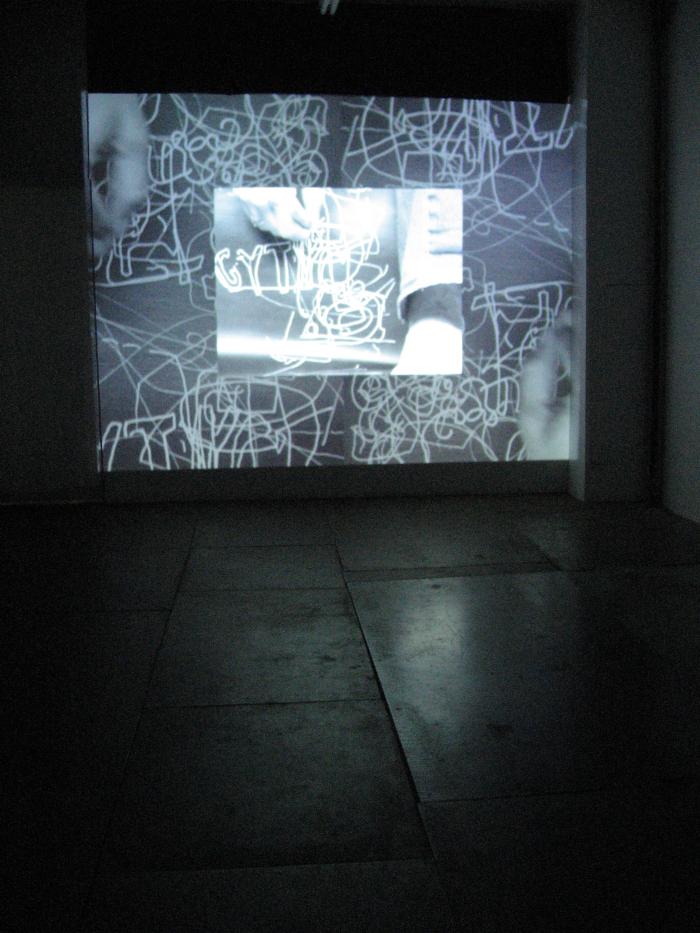 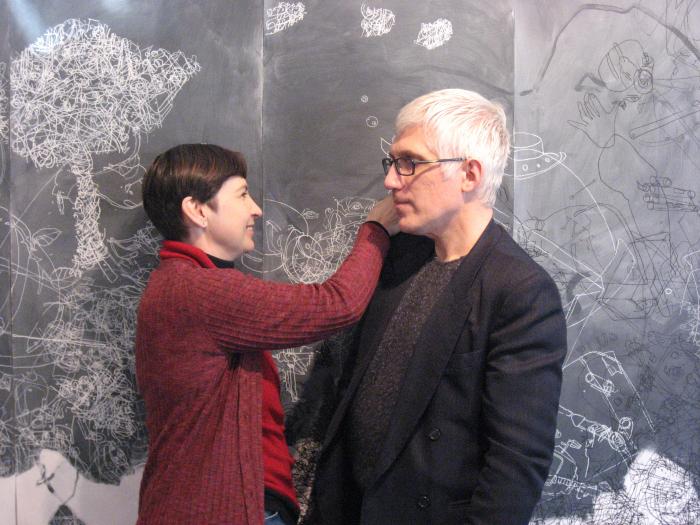 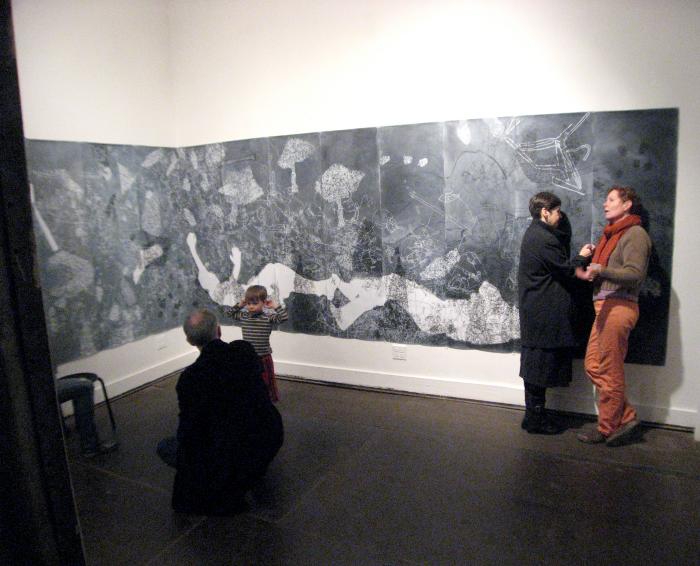 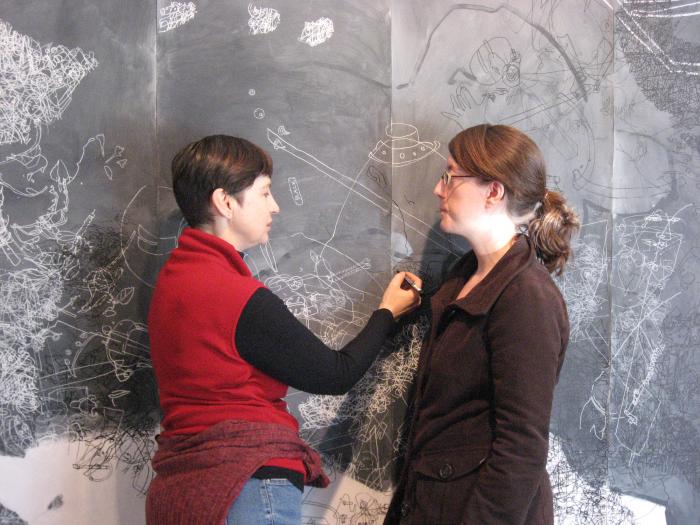 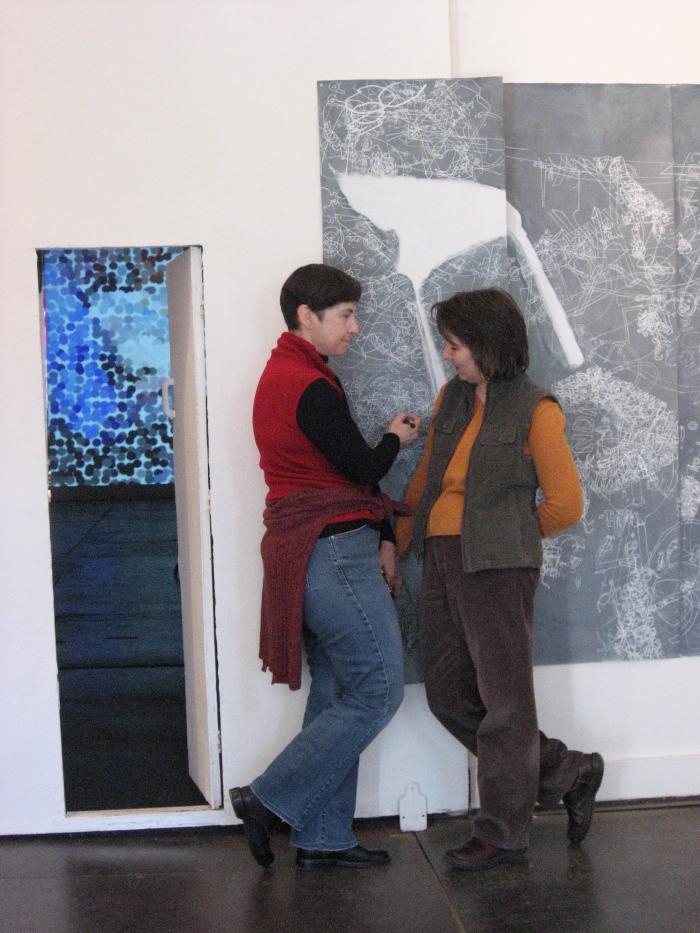 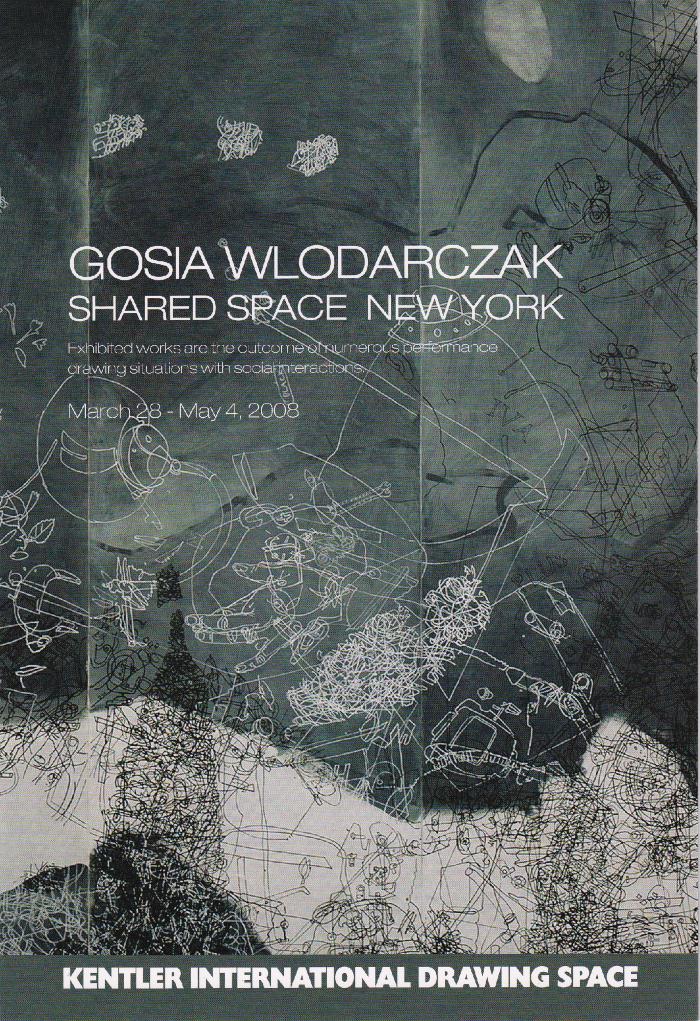 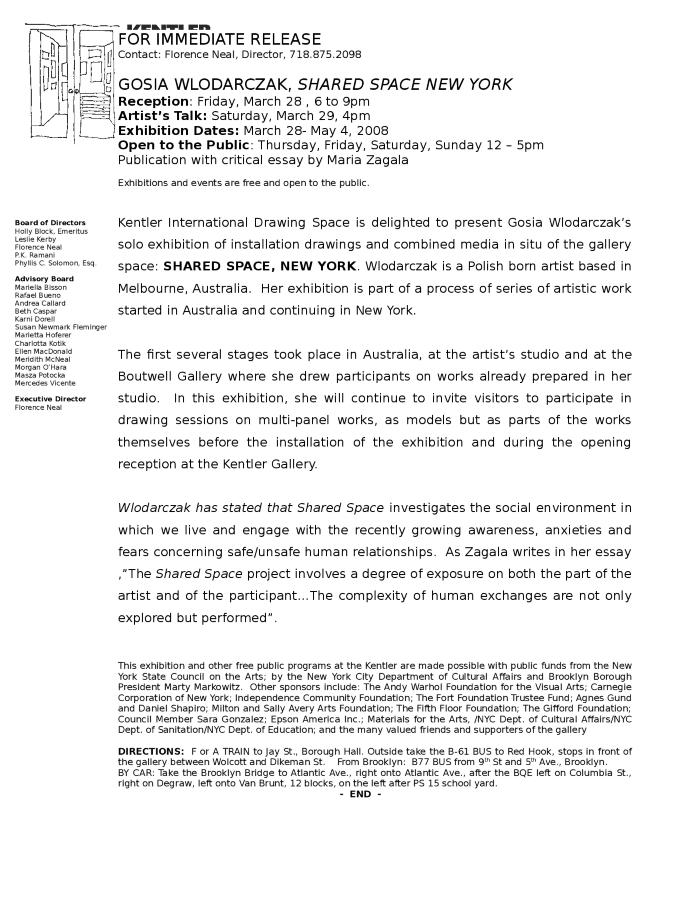 
Introduction
In Shared Space Gosia Wlodarczak explores the boundaries of personal space, safety and security through a series of performative interactive drawings.1The parameters of this examination are set by the actual size of her body. It is a highly personal undertaking, in which the drawn line acts as a barometer, registering the experience of participating in an exchange with a loved one, a friend, or a stranger. These gradations of intimacy are examined through the process of sharing time in close physical proximity with invited participants in drawing sessions that last from as little as 15 minutes to several hours over a number of days. They map the minute shifts in tone from the cool, tentative overtures of an initial encounter to warmer, relaxed attitudes as rapport is established.

Wlodarczak’s practice is deeply thought out, spontaneous, and rigorously executed. The two multipanel works in the exhibition Shared Space Sydney and Shared Space New York have evolved out of a cross-disciplinary approach to art making which Wlodarczak has pursued since 2001. She creates installations that combine drawing, performance, photography, video, prints and music. In Shared Space, however, Wlodarczak works with the most elemental media: a marker and ground. The drawings began in her home in Melbourne and end in New York, where they will be “finished” at the Kentler International Drawing Space.

Process
Wlodarczak’s process radiates outward from her most intimate sphere to encompass looser personal interactions and situations. The drawing ground and shared physical space is a piece of linen or paper with which Wlodarczak and her participants are in continuous contact. The result of these exchanges is a series of panels that comprise the traces of drawing sessions held in different environments and conducted under different conditions. The panels read as layered, intricate weblike structures of drawn outlines of varying density, as minimal as those found at a crime scene. The result, however, is a virtuosic display of skill. Wlodarczak’s relentlessly practiced hand renders the visible world with great authority. Her outlines suggest the weight and contours of objects with remarkable accuracy. Areas where there are no lines --containerlike voids where a body sat or stood--emanate with a particular intensity.

Wlodarczak’s drawings are records of a social exchange that has occurred in time and therefore map not only the visible world, but also the temporal dimension of the encounter. The eye perceives the panels both as flat surfaces and as an illusion of three-dimensional space. This shift in perception from the abstract to the representational is a revelatory moment.

For Wlodarczak there is no demarcation between life and work, between the everyday and an artistic practice. A studio would imply creating a separation that would compromise the spontaneous act. She begins her interactive performative drawings in the environment in which she spends most of her time--her home. After preparing the linen ground by loosely applying paint to the surface, Wlodarczak’s first drawing session for the Shared Space panels is with her most intimate companion: her husband and close collaborator, Longin Sarnecki. This primary relationship--on which the artist’s personal security is most dependent and therefore, arguably, the most affected by the process of self-exposure-- forms the first layer of the drawn surface. She draws around and between their bodies with a fluid gouache marker held in one hand. Her lightly drawn, continuous line “travels freely” as far as her hand can reach.2 Patches of density, which the artist describes as “enclosed spaces,” cover the shared space in between their two bodies; a wandering line connects these patches with “solitary spaces” of drawing activity--the areas bounded by Wlodarczak’s legs where there is nothing but the artist’s own body. and no connection between two body contours.

The next stage of the Shared Space performance involves drawing over this first layer in a session with a friend or acquaintance in either Wlodarczak’s home or in the participant’s home or workplace. In Shared Space, Sydney, the drawings took place in the Boutwell Draper Gallery, where the work was first exhibited.4 The men and women were requested to take their most comfortable position; the participants leaning, sitting or standing (the latter arguably more comfortable if there is less intimacy between the artist and participant). Following the method set during the first session, Wlodarczak draws the space in between the contours of their bodies, or around their feet, on the shared space of linen. Each session typically last several hours. She draws in an automatic, non-predetermined way, her hand moving continuously.

The line is a straight translation of the activity of the gaze, as it takes in its surroundings. Wlodarczak’s action is fluid, the marker moving away from the body in smooth loops, unconscious, as free or labored as breathing. Wlodarczak is so practiced in this action--it has been the core of her work for years--that although the activity may seem strange to her participants, it does not interfere with her ability to converse. Indeed, the artist can eat, drink and socialize with ease if trust is established. Her movements flow with the rhythm of the exchange.

The third and final stage of the Shared Space series involves inviting strangers to participate in drawing sessions in New York on both multipanel works (Shared Space, New York and Shared Space, Sydney) before the installation of the exhibition and during the opening reception at the Kentler International Drawing Space.

Personal Space
Wlodarczak admits that “drawing around another person’s body can be discomforting and requires a degree of trust, openness and willingness by the subject to share one’s personal space.”5 The Shared Space project involves a degree of exposure on both the part of the artist and of the participant. Through the drawing process, Wlodarczak examines her physical and emotional connection to those she interacts with. She is willing to put her relationships, and their accompanying conceptions of distance and closeness, under the pressure of scrutiny. The complexity of human exchanges are not only explored but performed. Wlodarczak’s drawings register the spectrum of human intersubjectivity, from unexpected warmth to hurtful coolness. Her markers draw around the soft and hard contours of her own and another body--the parts that continually weather exposure, as well as those that are rarely touched by anyone other than a lover. The drawing makes manifest her experience of negotiation, hesitation and ease in the company of others.

Louise Bourgeois has described drawing as a form of exorcism, a release, “a little help.”6 The obsessive nature of Wlodarczak’s drawing practice conveys the artist’s need to quiet anxiety and to push thoughts of the past or future away. Although Shared Space, by dint of its duration and multiple interactions, registers a wide range of emotions, it possesses nonetheless an underlying anxious quality. This anxiety could be interpreted as expressive of a lack of ease or a heightened sensitivity to the unstated subtleties of social engagement.

Wlodarczak’s own experience as an adult of migration from Poland to Australia may be relevant to the questions she poses in her practice. Shared Space can be understood as evolving from the condition that every migrant feels in an adopted country, who upon arriving in a foreign land must familiarize themselves with new laws of exchange. This exchange is not only about acquiring a new language but also grasping the codes that govern intricate social relations and the sharing of space. These interactions, once taken for granted, are suddenly cut adrift. The full horror, or humor, of this bewildering process is registered by the body, and although outwardly the surface may appear calm (the movement of the marker fluid), internal calibrations are constantly being made. In her practice, Wlodarczak bravely puts her own body forward in direct, sometimes excruciating relationship to others. It is no coincidence that the panels are the artist’s exact body height. Wlodarczak’s project activates an awareness of this negotiation in those she is in a dialogue with, and in the viewer of the completed work. Her method relies on the power of the performative drawings to bring about a transformation in the experience of intimacy. As such, it is a quietly hopeful practice.


Maria Zagala is Associate Curator of Prints, Drawings & Photographs at the Art Gallery of South Australia, and Affiliate Lecturer at the University of Adelaide. As an assistant curator at the National Gallery of Victoria she co-curated a series of exhibitions that explored the relationship between contemporary art and the art of the past-Grotesque: The Diabolical and Fantastic in Art (2004), Drawn (2006), and Imaginary Prisons: G.B. Piranesi and Vik Muniz (2007).


[1] These are Gosia Wlodarczak’s stated aims for the project in Shared Space, New York, unpublished, 2008.