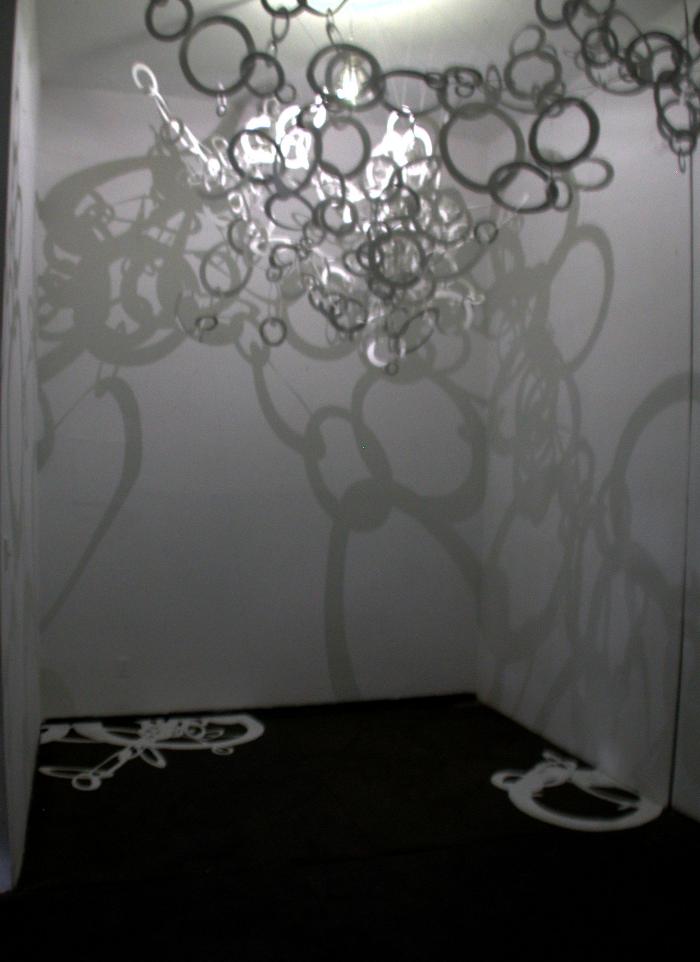 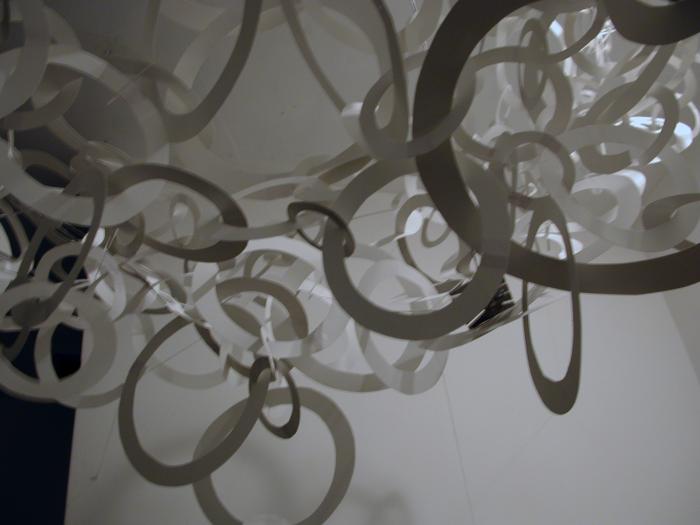 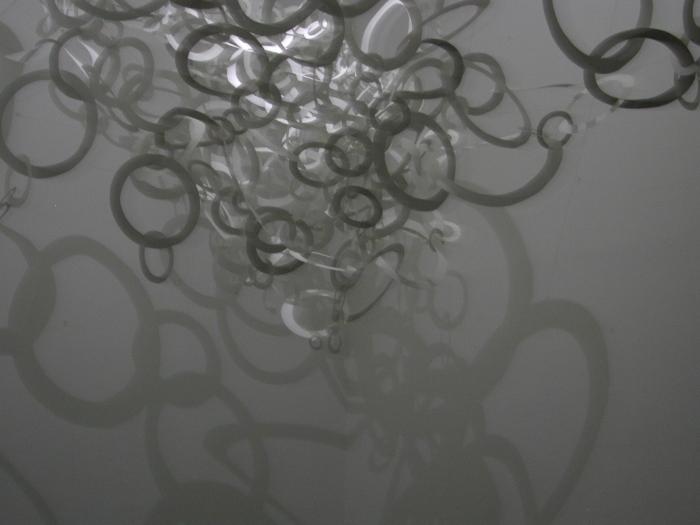 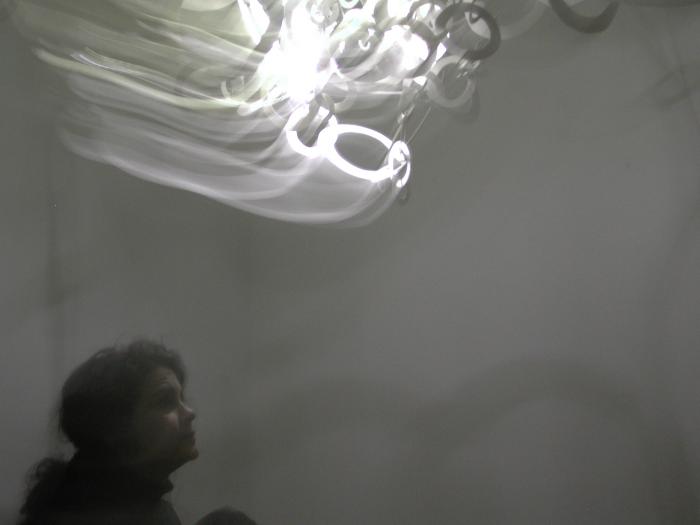 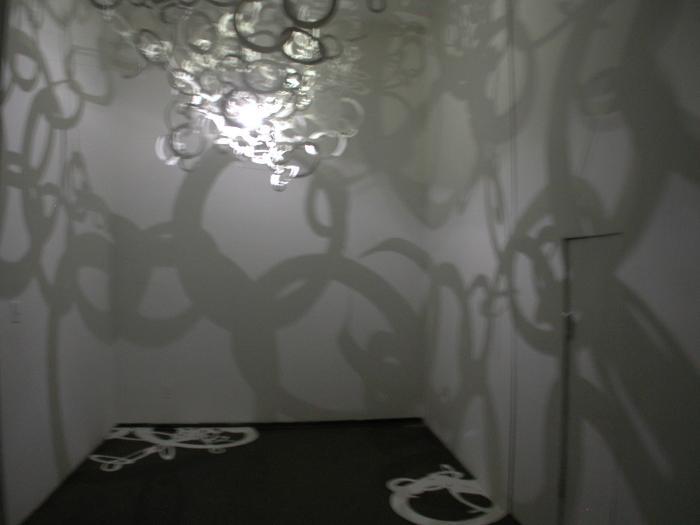 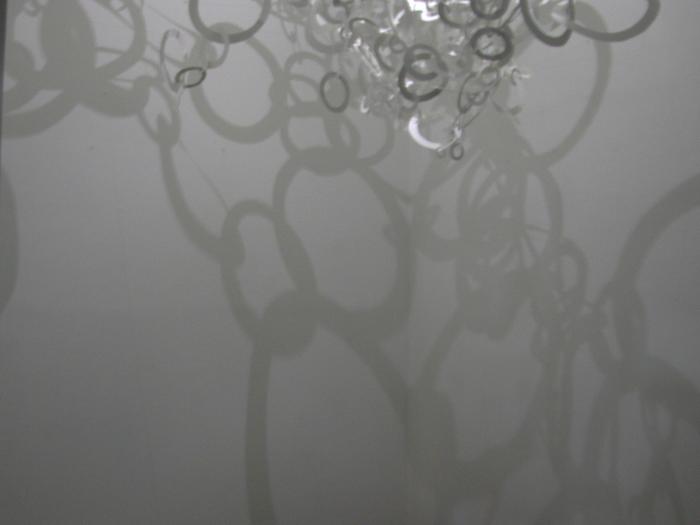 ACCUMULATION is an attempt to show the accumulation, inter-connectedness and movement of organic energy patterns, an installation using sound, light, movement and three dimensional paper structures. The work reflects Egger's ongoing interest in New Physics and its underlying philosophical implication that everything in the universe is woven together by indivisible links. All phenomena in this world are interdependent and a part of a larger system. This view can be found in modern science, spiritual teachings and ecology and has had a deep impact on the artist who senses the tremendous implications for peaceful and continuous life on this planet. Entering ACCUMULATIONS, the visitor becomes a part of the work, embraced by shadow patterns that float and move all around him or her like an intangible net. Paper, strings, LED powered light, a small motor and prerecorded cello sounds work together to weave patterns of accumulation and dissolution. The artist will perform live on the cello at the opening reception.

Judith Egger is a German artist whose work expresses itself through installation, performance and sonic experiments. Recent projects include: NOMADSCAMP (July 2004) a one night long installation/performance in one of Munich´s city center building sites. Egger conceived the project, sponsored by the City of Munich, organized and presented 8 musicians/poets who inhabited large white tent objects in a public square for one long summer evening. Illuminated from within, the tents themselves and the shadows of the artists and musicians doing their work, created a strong visual impression in the cityscape. In addition, the constant dialogue between artists and musicians through sound, movement, shadow and poetry added to the surprising visual landscape. The resultant "sound carpet" was in constant flux, representing never ending change. "Culture and peace grow, when differences meet openly and mingle - when individuals begin to communicate with the "other.” THE INSTITUTE OF HYBRISTICS AND EMPIRIC SCIENCES OF SWELLING BODIES (April 2004, ongoing) Swelling energy is the life force that stands behind the growth of any organism - whether an elephant or bacteria stock. Energy to reproduce is common to parasites, rose bushes as well as ideas and working concepts for countries and continents. THE INSTITUTE OF HYBRISTICS AND EMPIRIC SCIENCES OF SWELLING BODIES focuses its research within and about this process and uses various temporary spaces for its ongoing research and development. The Institute's initial installation and performance was held in a storefront in Jahnstrasse, Munich (April 2004), and was followed by a second permutation in the Galleria O'Artoteca in Milano (June 2004). GRAPHON (2003, ongoing)