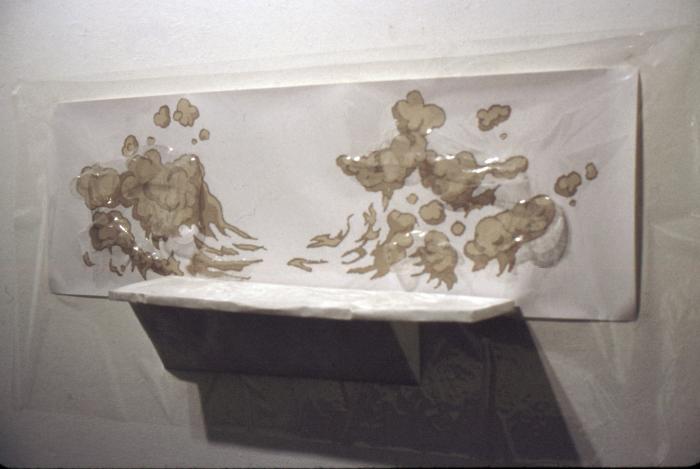 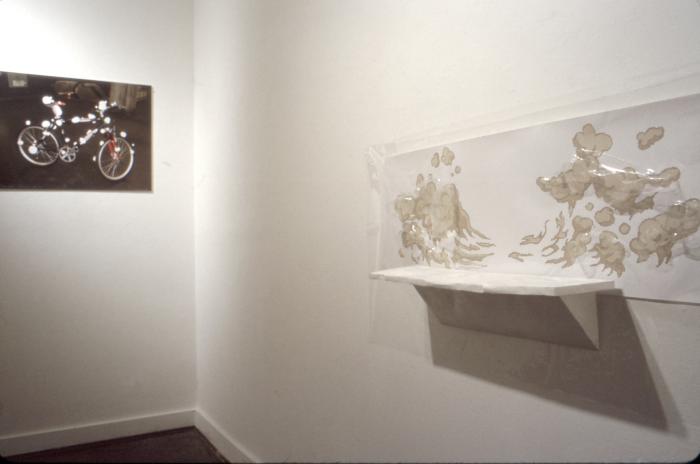 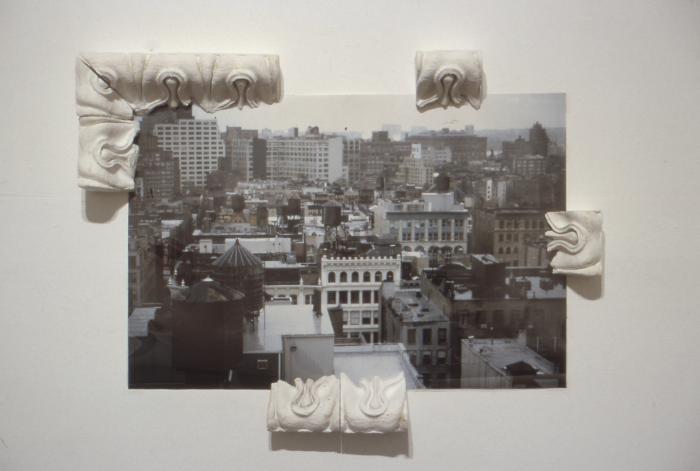 Juana Valdes, "Room with a View" 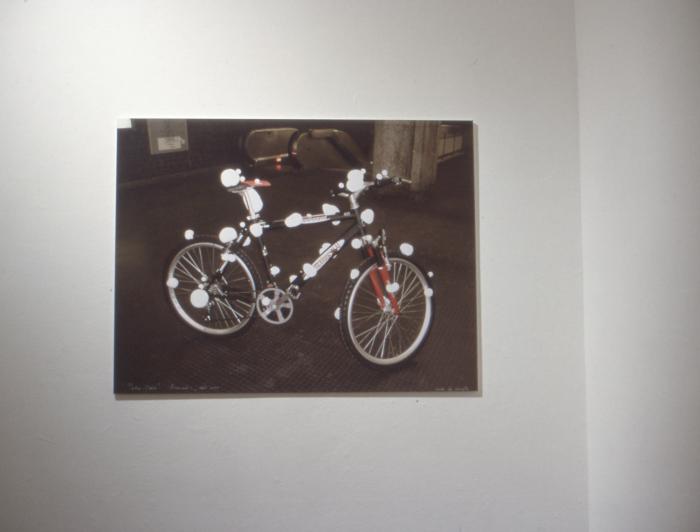 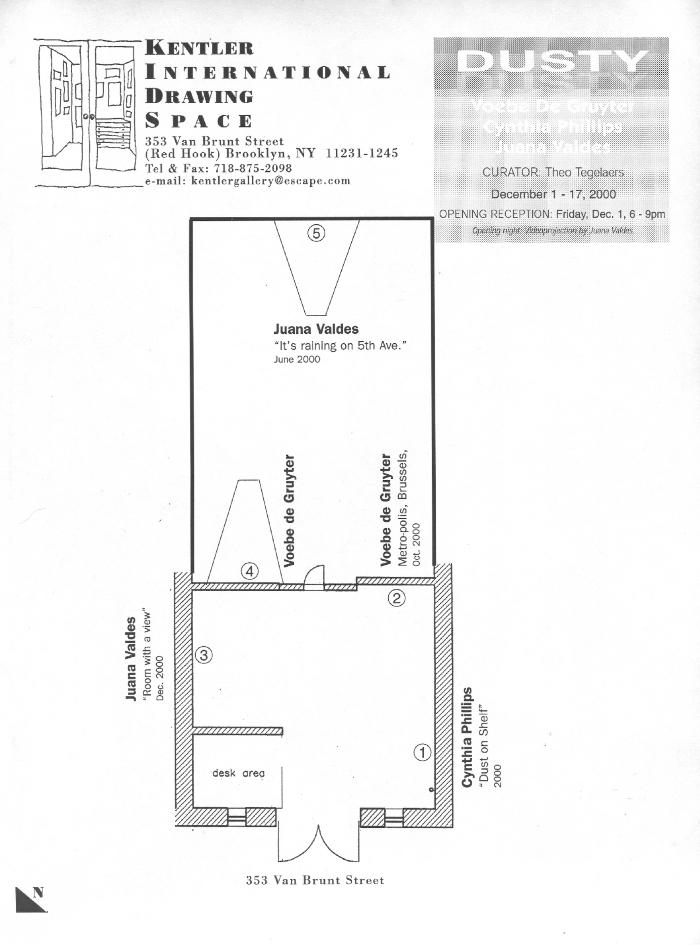 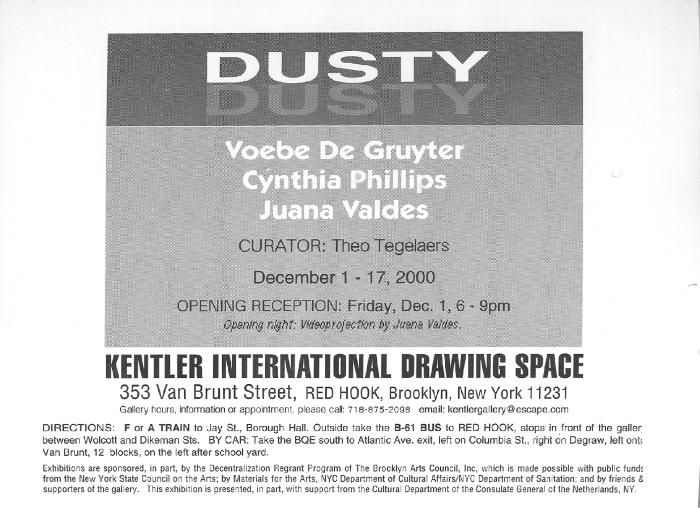 "Dusty" features work by Voebe De Gruyter (The Netherlands), Cynthia Phillips (Los Angeles) and Juana Valdes (New York). The title of the exhibition refers to the insubstantial nature of dust as well as to the metaphorical meanings embodied in this word, disintegration, the abject but also to the act of cleaning, clarification and purification.

Different than what is usually shown at Kentler International Drawing Space, the works of the artists in this show are not drawings in the strict sense of the idea which appears immediately on paper.  But the digital print of De Gruyter, the shelf on the wall with the cloud motive of Phillips and the cast ornaments of Valdes can nonetheless be approached through the idea of drawing.

De Gruyter finds her inspiration in her immediate environment.  This can be in flattened chewing gum on the street, the scratches on the bottom of a found bucket, reflections in a shiny polished shoe or in drops of water. The images she finds there are not directly visible but are disintegrated, in the chaos of things and events of urban life.  De Gruyters works stimulate us to use our imagination. In her world the unsightly and unnoticeable become poetry. She lets us experience the magic and shows a world, in a humorist way, that is more fun and more fantastic than the bleak reality that most people experience in their daily lives.

A drawing is a reflection of a moment. By means of cast shadows that Valdes captures in a drawing she seems to want to say that reality is continuously changing. Through changes in the falling lights the forms transform. In her work Valdes comments on the modernistic concept in which everything of temporary nature is being excluded for the sake of the idea of total purification. Arguing against this concept, Valdes shows that things do not have a fixed meaning but their meanings change continuously depending upon the context and circumstance in which they appear. Through the use of different historical symbols that are juxtaposed with a fixed idea of signification by means of installment and the use of incoherent materials, Valdes creates an ambiguity within her work that leaves space for reflection. Everything exists in a state of disintegration and transformation in which subjectivity becomes a determining factor for the creation of meaning.

Phillip's work probably comes closes to the idea of drawing. It can be seen as the transition of drawing into the three dimensional space. Phillips analyzes the perception of a simple idea; a cloud of dust above an empty white bookshelf. It is a simple image that hides nothing. The complexity of the work exists in how it is executed, it's delicateness. The shelf made of paper is just strong enough to carry its own weight and maintain its form. but even that is precarious. The cloud of dust, a computer animated drawing, is not more than the idea of it. This print is pinned on the wall covered with a layer of transparent cellophane in which small indentations are made that are shaped as flaps and when unfolded, follow the curves of the cloud image. After a close inspection, however, it appears that everywhere in the work we find irregularities that enforce the ambiguity of the work even more. The shelf shows folds and dents in the paper, the flaps do not follow the curves of the image very precisely at all. That in first instance seems to be a precisely constructed image ultimately wavers in all directions. Te moment of signification is being deferred endlessly. The image escapes and does not let itself be pinned down.


This exhibition is presented, in part, with support from the Cultural Department of the Consulate General of the Netherlands, NY.