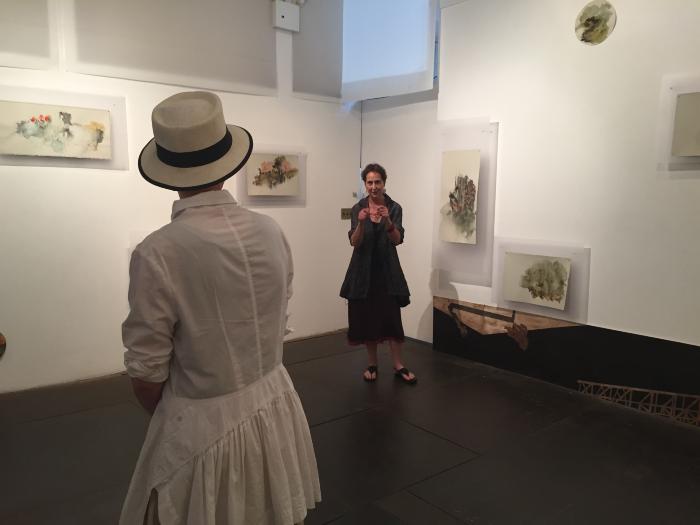 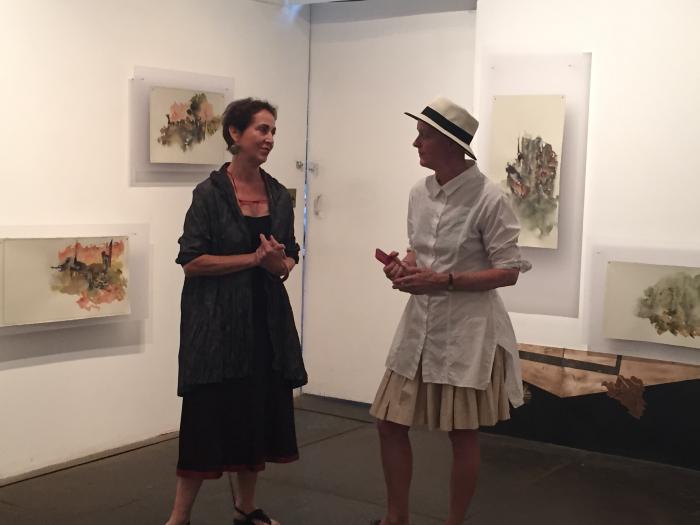 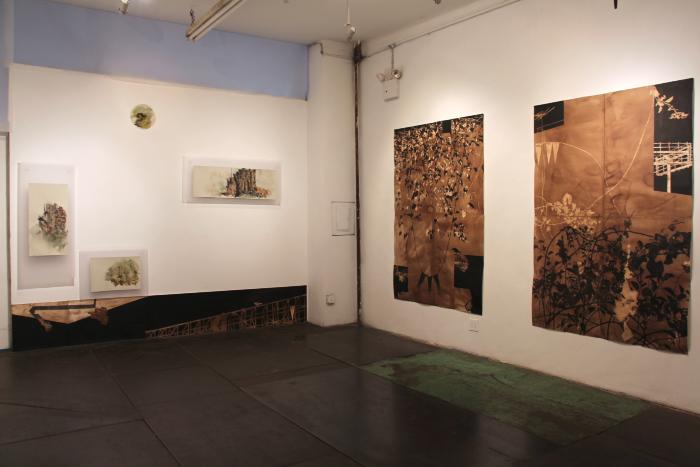 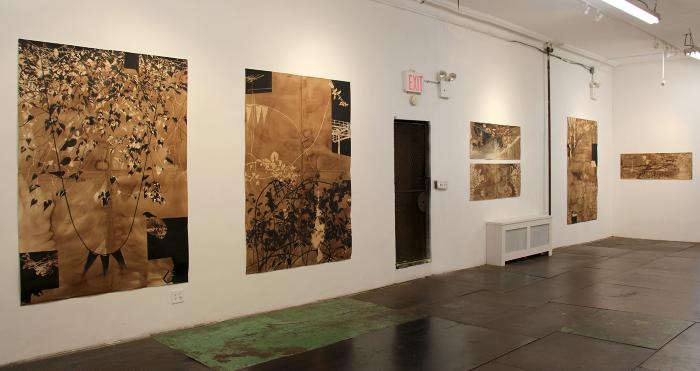 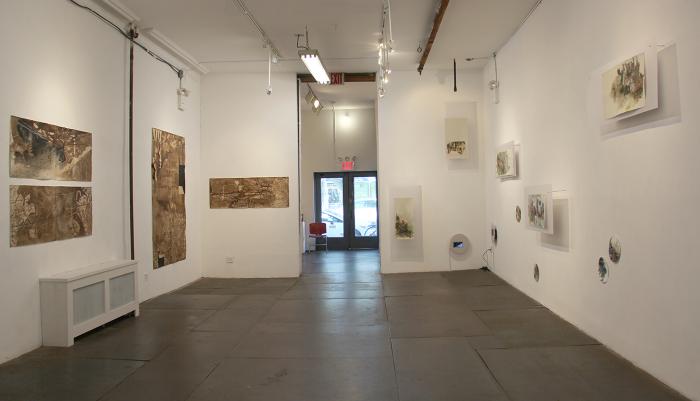 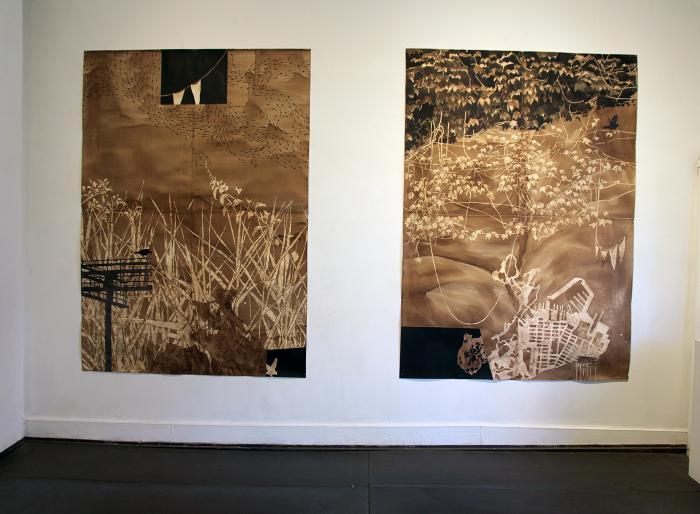 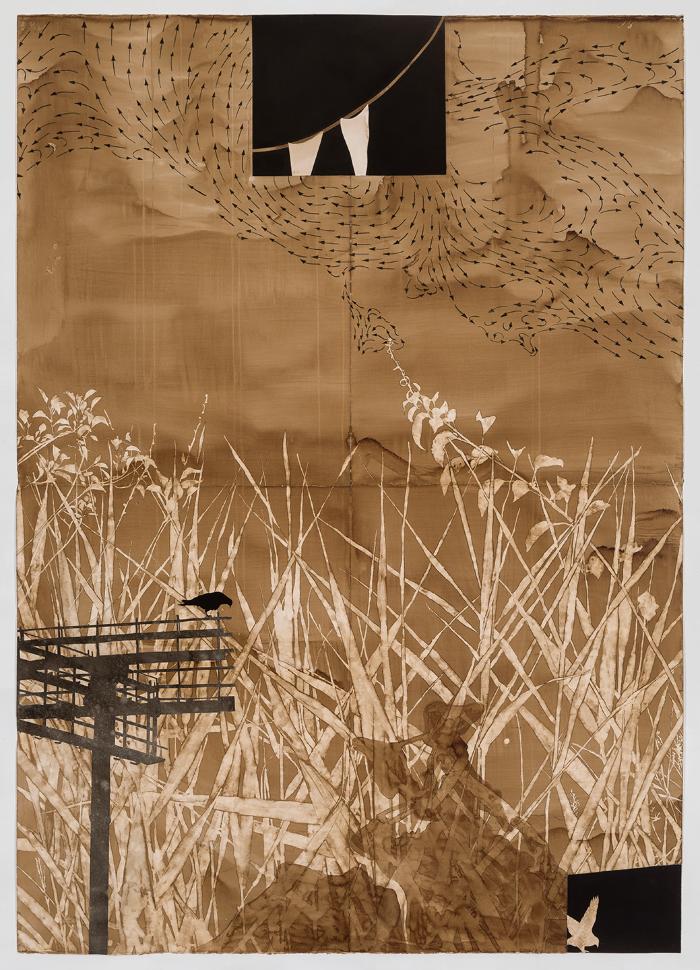 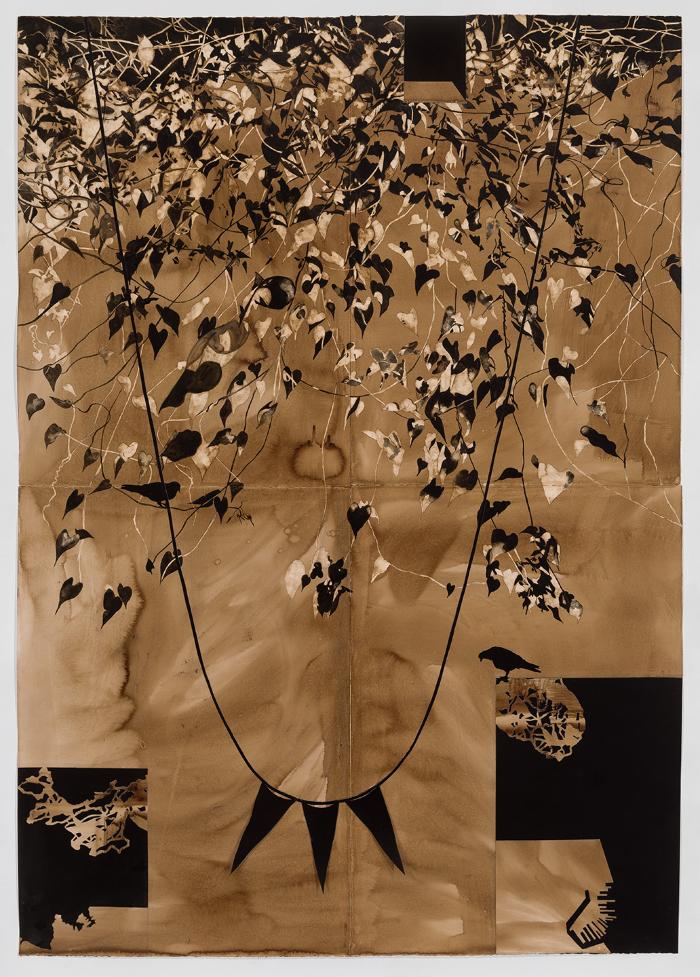 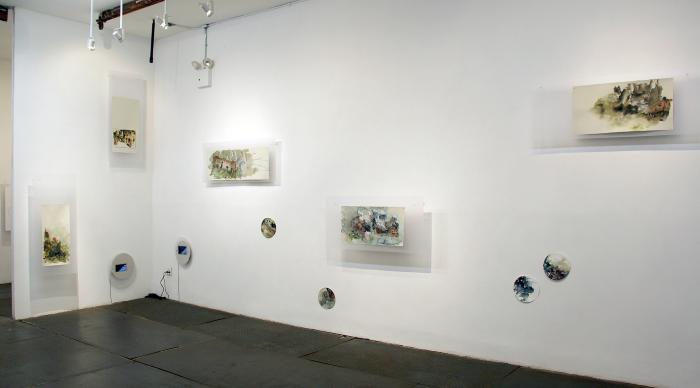 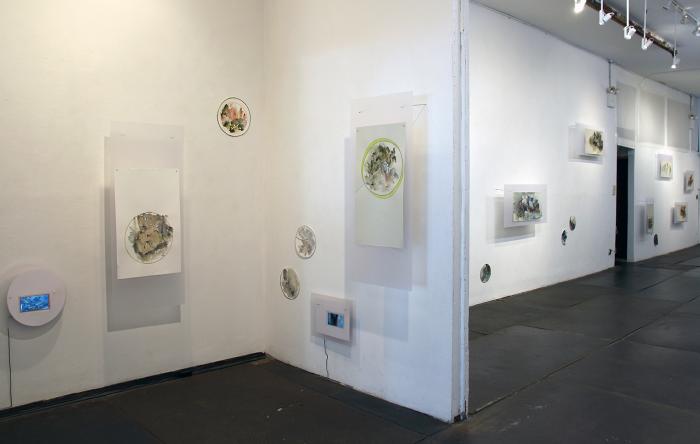 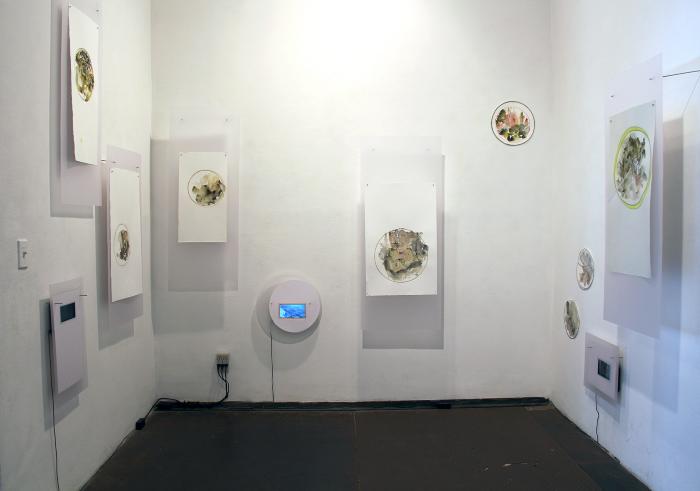 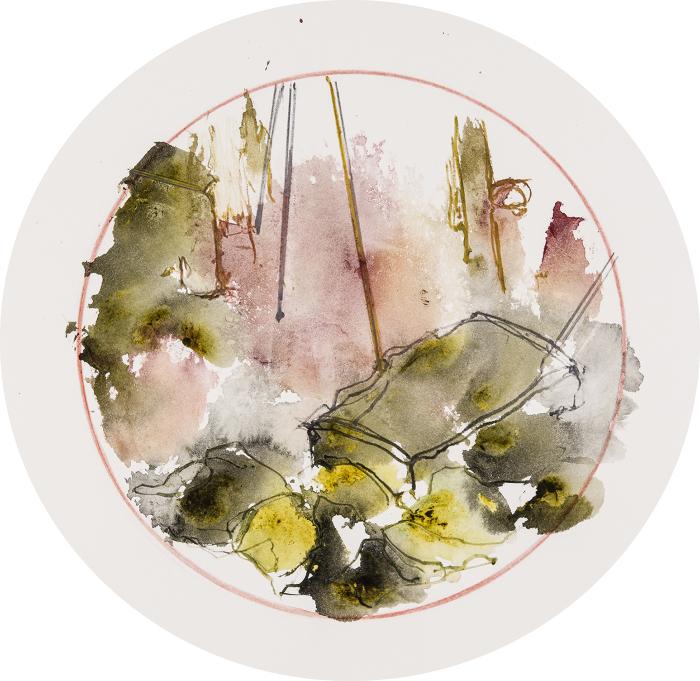 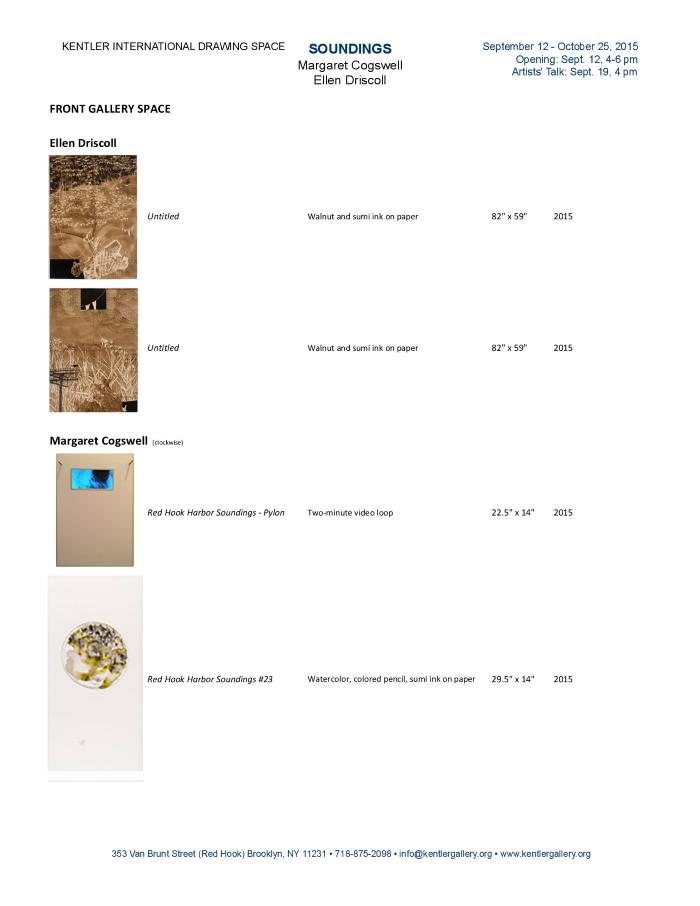 Soundings, an exhibition of new works on paper by Margaret Cogswell and Ellen Driscoll, is an evocative, two-pronged study of Red Hook, Brooklyn, a community facing New York Bay (and the Statue of Liberty). Since it is both urban and maritime, they decided to divide it between them, Cogswell focusing on water and Driscoll on land. Their soundings, an acquisition of information about the location, as well as a testing of that acquisition, were based on closely observed details that cumulatively became immersive, adding up to a portrait of a place, a record of what exists now, embedded in the residuum of what existed before. Retrieving what they discovered—and what fortuitously came their way—each artist limned a composite of an old, gritty industrial neighborhood that, in another turn of the historical wheel, is once again thriving.

A collaborative venture, Soundings is based on a decades-old friendship and the artists’ deep aesthetic rapport. However, once the theme and the parameters were established, each retreated to her own studio to work independently, relying upon the installation (they will have their individual walls and will share one wall) to recreate their dialogues about place, memory and the inevitable transience that marks all our endeavors, all that exists.

Cogswell, who has been working on water projects for the past 15 years, is best known for her engrossing River Fugues series, an ongoing multidisciplinary project that exhaustively explores the intertwining of rivers, industries and people’s lives. For her Red Hook Harbor series, she employs similar techniques in her gathering of data, much of it “looking and listening,” she says. More archaeologist than anthropologist this time, following Driscoll’s lead, she was fascinated by the vestiges that emerged from the ebb and flow of tidal waters. Her watercolors, a mix of the abstract and the representational, convey the beauty of disintegration with images such as a rotting pier, remnants of barges, ships of all types, metal cans, pipes, other detritus, delicately drawn in colored pencil and washes of rust red and graduated hues of greens that become almost black in places. Dimensions vary from the extra small to the larger. Attached to frosted acrylic sheets by tiny magnets, they seem to float off the wall, which functions as the ground. These amorphously shaped works are framed by an outline of a circle, square or rectangle, reminding us that they are excerpts snipped from a much larger panorama, a much larger narrative. In between the drawings, round or square videos will be dispersed. These brief loops capture, among other nautical sights, the waves lapping the harbor’s edge and a moldering seawall, painted with the richest of natural patinas. Others examine a section of orange plastic mesh fluttering slowly in the breeze, caught on a pylon, or a crumbling pier blackened by moss. Her installation will be accompanied by an audio component that brings the chatter of the harbor inside, such as the crash of waves, the slap of rope against water, the creak of buoys.

Ellen Driscoll’s drawings look landward. Her format is more monumental, although her subjects are often modest, mundane, the imagery fluid, on the verge of dissolution in some instances, not always easy to read. Her painterly, abstract passages, however, sharpen into realistic depictions, as if coming in and out of focus, imparting a sense of optical movement that is not dissimilar to the ambience of Cogswell’s watercolors. Driscoll deliberately limited her range of materials for this project, her color scheme also more monochromatic, with a range of earthy, subtly modulated browns, plus blacks and whites, to match Cogswell’s restrained palette. Her drawings, extraordinarily delicate, made from walnut and sumi ink, which she subjects to “a process of removal with water” in areas to create a “ghost image,” possess a melting light that augments Cogswell’s translucent sea-tinged watercolors.

Driscoll’s production, however, suggests photographs or their negatives touched by sepia-toned colors, Victorian silhouettes or scraps of memorabilia, poignant in their ephemerality. What she muses on is adaptability and transitions. Her subjects include what she calls “volunteer” plants, flora that have migrated, settled in, flourished, stubbornly attaching themselves to all kinds of surfaces, climbing walls, erupting through sidewalks or the asphalt of streets. Local birds—sparrows, starlings, pigeons, all canny survivors—appear, as do plastic pennants, television antennae, blank billboards. Maps of Red Hook are included, both in its present and past incarnations, and, interestingly, also a plan of Shenzhen in China. She links what was a sleepy fishing village in the 1970s on the Chinese mainland, now a booming manufacturing center and global port, to Red Hook, the busiest freight port in the world from the 1920s to the 1960s (and in the 1990s considered by some to be among the worst neighborhoods in the country). It is changing again as gentrification takes hold, the two sites evidence of the cyclical transformations that habitats undergo.

One source of inspiration for their project was the murals of Pompeii, frescoes that Driscoll has long admired and often discussed with Cogswell. Driscoll was drawn in particular to their blend of the illusionistic and real, in which trompe l’oeil gardens and other scenic vistas are framed by real architectural elements, in which nature was excerpted and preserved. She also marveled at this particular preservation, buried for centuries under volcanic ash, rediscovered only in the mid-18th century. They were both intrigued by the murals as reclaimed ruins, as testaments to a vanished civilization that had seemed substantial but disappeared overnight, a point of view for their own projects.

Cogswell and Driscoll responded to the idea of flux and of insights that can cause a momentary stoppage in the flow, in the order/disorder of things. Driscoll quoted Italo Calvino, who said “knowledge of the world tends to dissolve the solidity of the world, leading to a perception of all that is infinitely minute, light and mobile…” It is a perception that pertains to these two wondrously layered and poetic documentaries of the provisional, in which the disparate is revealed to be alike.