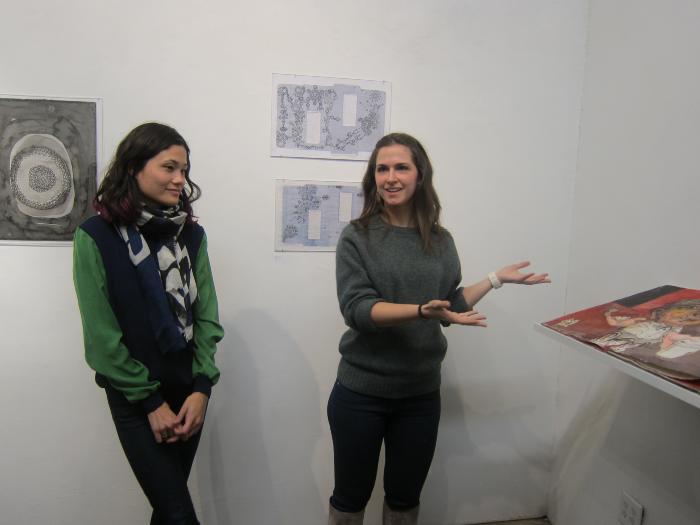 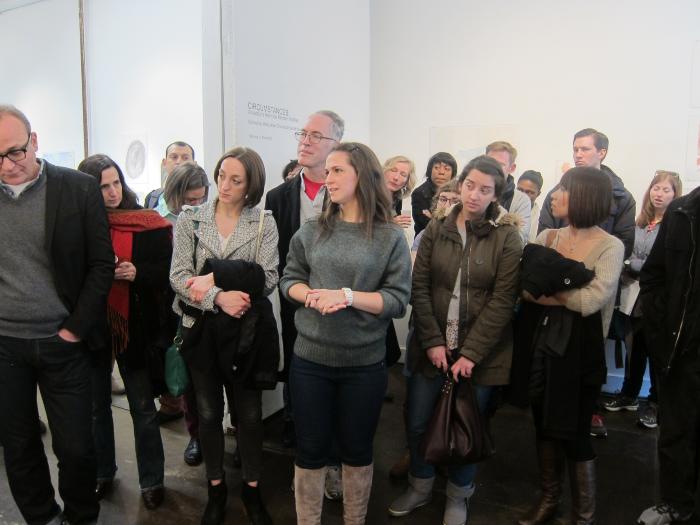 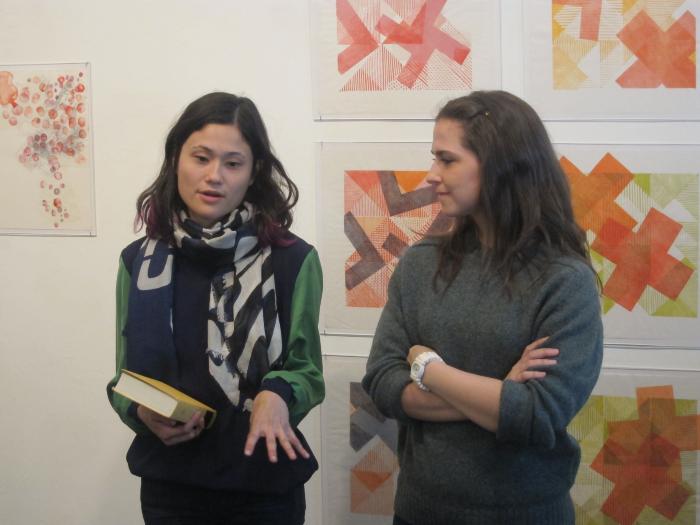 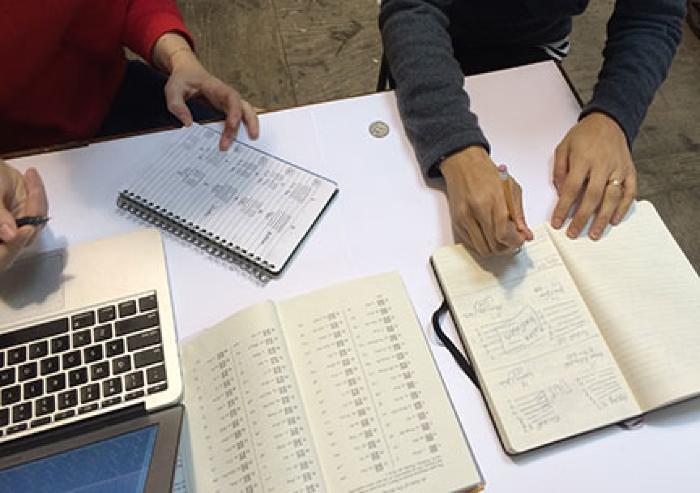 Selection process for "Circumstances" - Curators Holly Shen and Rachel Nackman consulting the "I-Ching." The 32 artists featured in the show were selected from the Kentler Flatfiles using a chance-based process inspired by John Cage’s seminal employment of the "I Ching," or "Book of Changes," an ancient Chinese oracular text.

...a purposeful purposelessness or a purposeless play. This play, however, is an affirmation of life--not an attempt to bring order out of chaos nor to suggest improvements in creation, but simply a way of waking up to the very life we’re living, which is so excellent once one gets one’s mind and one’s desires out of its way and lets it act of its own accord.” -- John Cage 1

The artists featured in Circumstances were selected from the Kentler Flatfiles using a process inspired by John Cage’s employment of the I Ching, or Book of Changes, an ancient Chinese oracular text. When we began planning for this exhibition, we were both reading Kay Larson’s 2012 book on Cage and his relationship with Zen Buddhism, Where the Heart Beats. Larson’s poetic account of Cage’s development introduced the idea that a curatorial project seated in chance could open us up to some desirable attributes of the artist’s experiential composure: practicality, presentness, attention, disinterestedness and acceptance. We decided to take procedural cues from Cage in consulting the I Ching as a guide. A chance-based process presented us with a means both to experience the deliberate impartiality of the Cagean method and to highlight the diversity of works on paper amassed since 1990 by Kentler cofounder and director Florence Neal.

In the early 1950s, Cage began using the I Ching as a tool for composing music. Operating within predefined boundaries, Cage would ask the I Ching to determine a series of variable elements within a composition; altogether the chosen elements substantiated a score for musical performance, the final creative outcome of Cage’s process. Cage eventually extended this working method to his writing and visual art, often in complex applications with breathtaking results. Working with the I Ching was for the artist an opportunity to “free my mind (ego) from its likes and dislikes.”2 Using a derivative methodology at the Kentler has allowed us to relinquish much of our curatorial ego. Instead we have each assumed the enjoyable role of objective explorer. We hoped to see, as Cage saw, “that all things are related. We don’t have to bring about relationships.”3 And indeed our process has revealed--by circumstance rather than by our own design--a selection of interwoven relationships already existing within the Flatfiles.

An explanation of Cage’s granular application of the I Ching to his working process is impossible to include here with proper respect for its brilliance and historical impact upon art making.4 In our application of the I Ching we have made no attempt to mimic Cage’s method. Instead we have adopted (and adapted) just enough of Cage’s methodological principles to experience the mindset of his way of working. We took this opportunity to be selfless, diligent and rational, but also irresponsible, in the sense that we forwarded curatorial responsibility to a disinterested system that we had structured in advance. We had only to observe the unfolding of our process and to acknowledge our responses to each artist as he or she was selected. Kathan Brown describes such abdication as “shifting from responsibility to choose to responsibility to ask,”5 and Cage wrote that to receive an answer from the I Ching to a question and to reject or ignore it is to have missed the point entirely: “We have no right to use [the I Ching] if we are determined to criticize the results and to seek a better answer.”6 Thus what we felt was crucial in employing a Cage-derived method was respect for his philosophy regarding chance-based operations: definition of a method and its boundaries; adherence to the established method even as those boundaries were bumped up against; and invariable acceptance of the results we achieved.

The I Ching is structured as a series of 64 hexagrams, each of which is accompanied by a passage of text. To consult the I Ching, one asks the oracle a question and uses chance to determine which hexagram is presented by the oracle as the answer. To create a hexagram, which appears as a graphic combination of six broken or unbroken lines, one throws a set of three coins six times; the results of each throw establish the broken or unbroken nature of one line. As one progresses through the six coin throws, the six resulting lines are stacked from bottom to top, creating one of 64 possible hexagrams. We set the goal of selecting 32 artists to include in the exhibition, thus establishing the limits of our activity, and we defined a working method by which we would draw two hexagrams for each selection of one artist.7 Each artist identified in this way would then join our list of participants. As we carried out our process over the course of one weekend, we found ourselves engaged in a sinuous experiential loop, moving from determination through anticipation to relief--with which came joy, or curiosity, or resignation--and then gritting our teeth to start again. It was more enjoyable than we could possibly have anticipated.

Cage wrote of his chance-based musical compositions, “It goes without saying that dissonances and noises are welcome in this new music. But so is the dominant seventh chord if it happens to put in an appearance.”8 Once the I Ching had selected all 32 artists, we surveyed the available works by each participant.9 While we had committed to accepting our results regardless of our personal reactions, we were pleased to find that the process yielded many striking formal and conceptual relationships between artworks. We were amazed by the number of selected artists whose own practice incorporates a methodology of chance--in particular by the selection of Richard Howe, who once worked as an assistant to Cage in the 1960s. It is a testament to the intelligent design of Cage’s method that a process of chance, so satisfying in its groundedness and objectivity, could upon completion present such broad opportunity for subjective exploration.

Circumstances is an index of our particular experience with chance-based process--but it is also an ode to the contributions of Florence Neal. The Kentler Flatfiles comprises works on paper by hundreds of international artists; it continues to grow and change under Neal’s arbitration. Neal works with participating artists to bring in new objects and to release others back into the world, establishing a constant flow of work through the Flatfiles. The divinatory text of the I Ching, like many human attempts at moderating or understanding our existence, is predicated on the concept of change and its duality. It encourages the embrace of positive and negative movement as part of the nature of our lives, and its passages prompt reflection on our own shifting states. To use the I Ching requires the acknowledgment and acceptance of our constant movement; the Flatfiles, too, is an ever-breathing, ever-circulating entity. With equanimity and grace, Neal ensures that it remains in motion and open to change. This exhibition is a sampling taken from one moment in the life of the Flatfiles. It explicates the activities of chance and of choice upon this collective body of work, uncovering beauty, wit and surprising interconnections all while making a definitive statement about Neal and her remarkable life’s work.


- Holly Shen Chaves is a curator, writer and artist liaison based in Brooklyn, New York. In September 2013, she joined BAM (Brooklyn Academy of Music) as Curator of Visual Arts. Prior to that, she worked as a curator for the Ambulatory Care division of Memorial Sloan-Kettering Cancer Center.
- Rachel Nackman is the curator of the Sally & Wynn Kramarsky Collection of American works on paper (www.aboutdrawing.org). She studied art history at Tufts University (BA 2007) and the Institute of Fine Arts at New York University (MA 2011). She lives in Brooklyn.

1 John Cage, Silence: Lectures and Writings by John Cage (Middletown, CT: Wesleyan University Press, 1961).
2 Kay Larson, Where the Heart Beats: John Cage, Zen Buddhism, and the Inner Life of Artists (New York: Penguin Press, 2012).
3 Cage, ibid., 175.
4 Others more familiar with the artist, as well as the artist himself, have already provided comprehensive accounts of his work using chance-based operations. Kathan Brown, founding director of Crown Point Press, includes a 14-page “book-within-a-book” on this subject in her 2000 publication, John Cage, Visual Art: To Sober and Quiet the Mind, on Cage’s use of the I Ching in a series of print projects executed in San Francisco at Crown Point. [Kathan Brown, John Cage, Visual Art: To Sober and Quiet the Mind (San Francisco: Crown Point Press, 2000), 64-77] The title of this exhibition is taken from a mesostic written by Cage and aptly used by Brown as an epigraph for her publication.
5 Brown, 49.
6 Cage, quoted in Larson, 182.
7 The I Ching is often consulted through an 8-by-8 square chart containing all 64 hexagrams, each of which corresponds with a nonconsecutive number from 1 to 64, which in turn corresponds to a passage of text in the book. For our purposes, we created doctored charts wherein each hexagram led us toward a number from 1 to 256. Using the first hexagram, we consulted a preliminary chart in which each of the 64 squares contained a consecutive range of four numbers, counting upward from 1 to 256. We then used a second hexagram to consult one of 64 secondary charts, each of which contained only the four numbers in the range identified by the first hexagram. This second hexagram would yield a final number from 1 to 256, which could be consulted against our master list of Flatfiles artists. Each of the 214 artists in the Kentler Flatfiles was assigned a random number from 1 to 256, with 42 blank slots inserted to establish a total of 256 options, in correspondence with the numbers in our charts. We chose 256 because it is the closest number to 214 that is also divisible by 64. We also determined in advance that if the oracle pointed us toward a blank or toward a duplicate, our response would be to throw an entirely new set of hexagrams. In the end we threw 80 hexagrams to identify all 32 artists.
8 Cage, Silence, 11.
9 Following our intuition, we made curatorial selections from each artist’s portfolio and designed the installation of the works. For those interested in further unpacking our selection process, our working documents and charts are on display in the gallery.