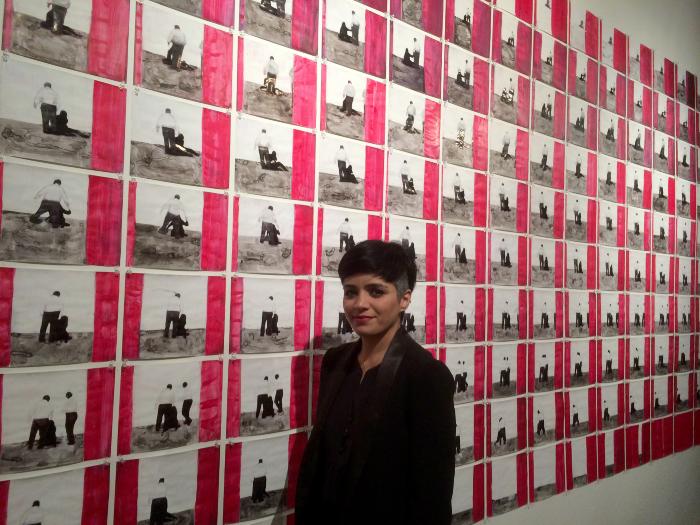 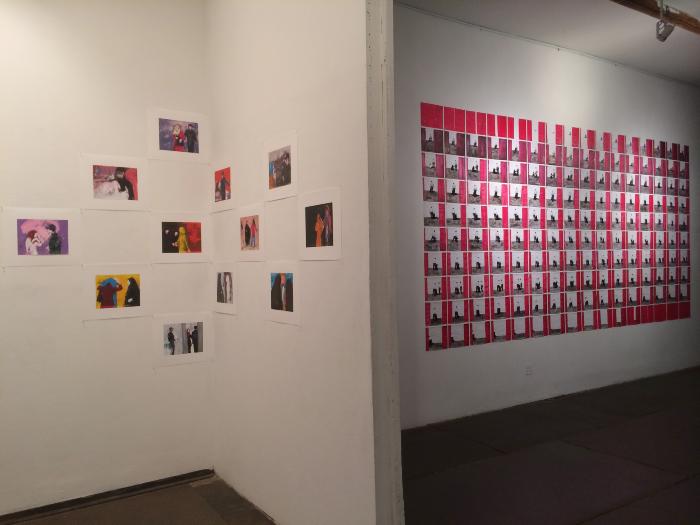 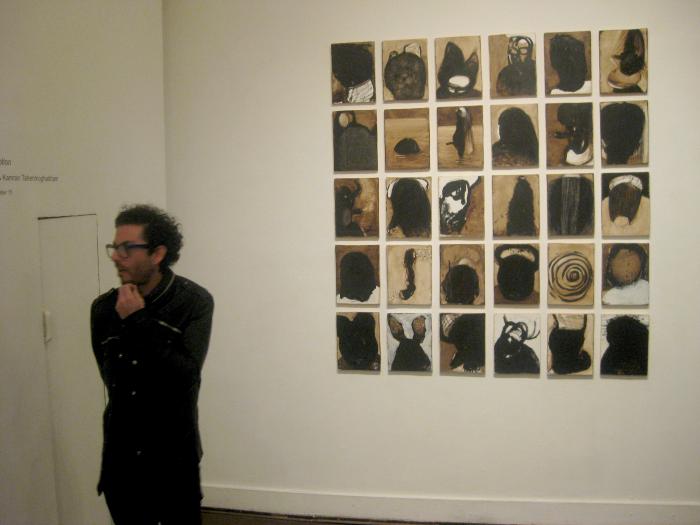 Kamran Taherimoghaddam with "Men at Work" 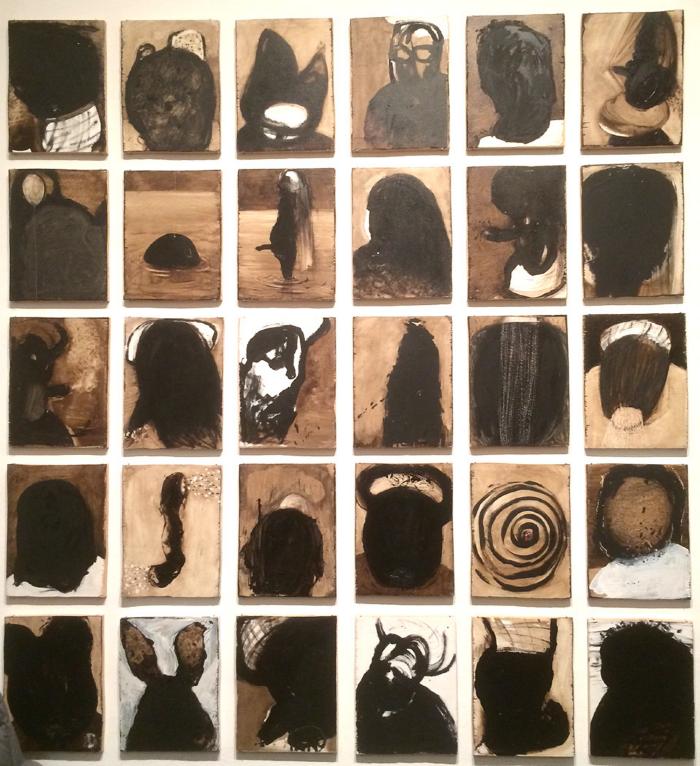 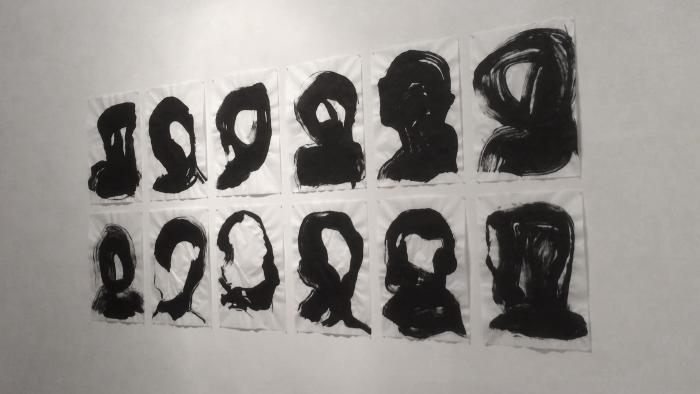 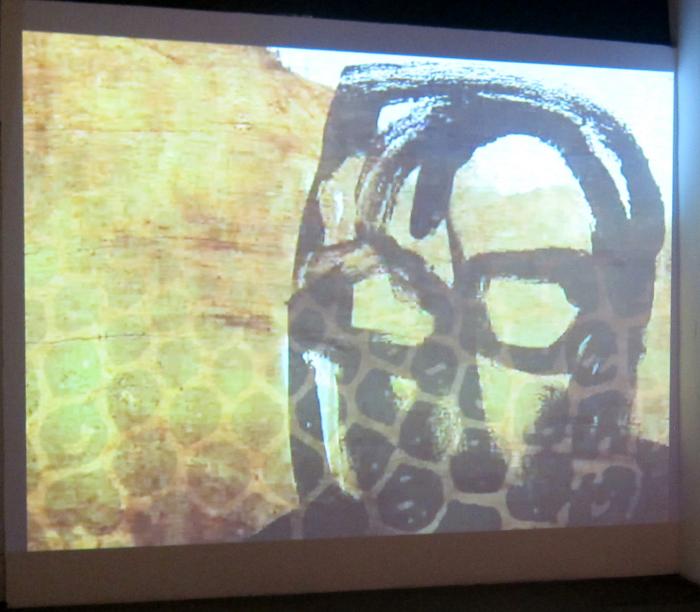 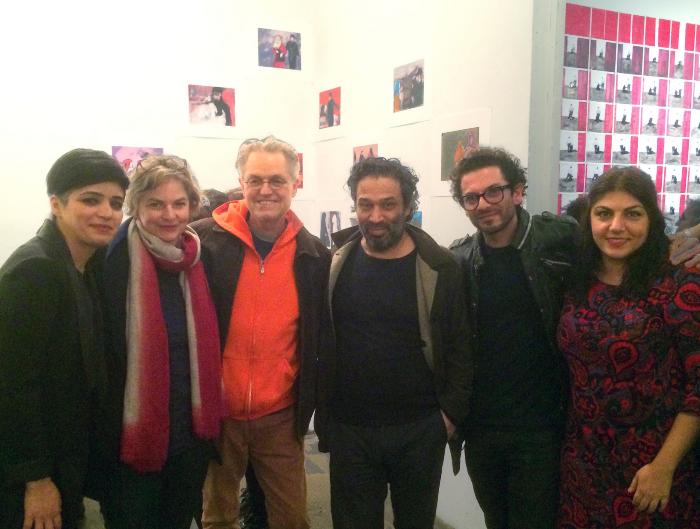 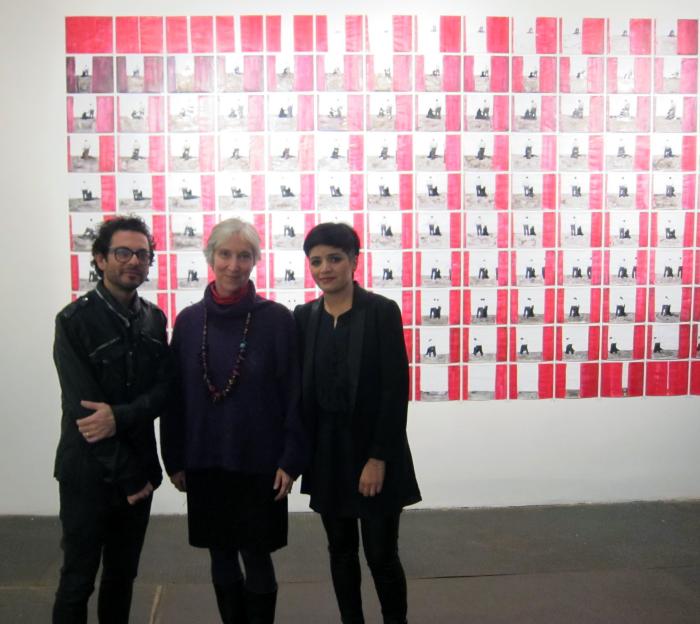 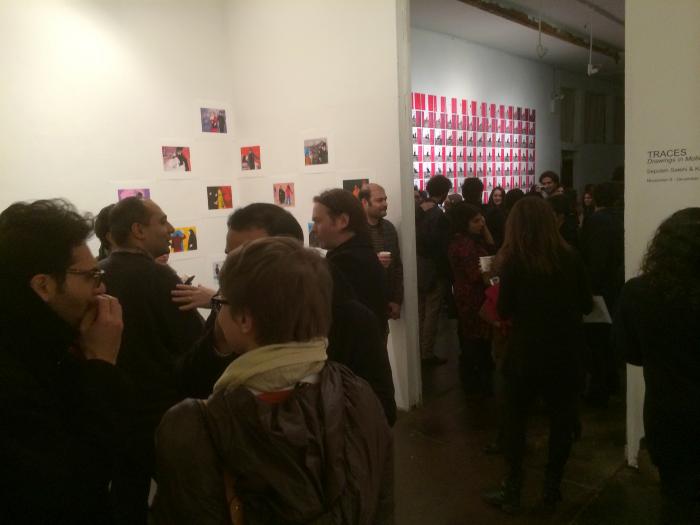 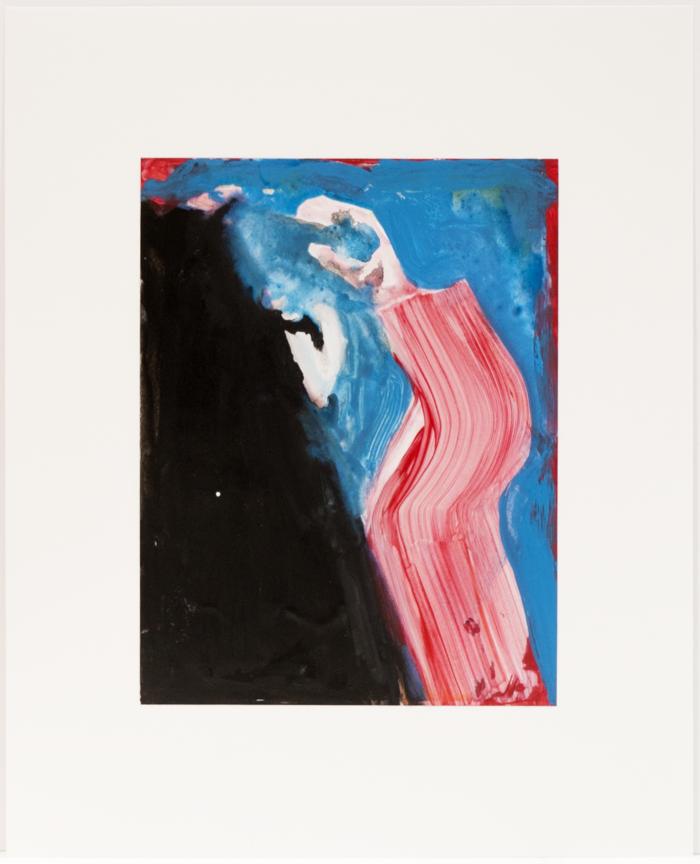 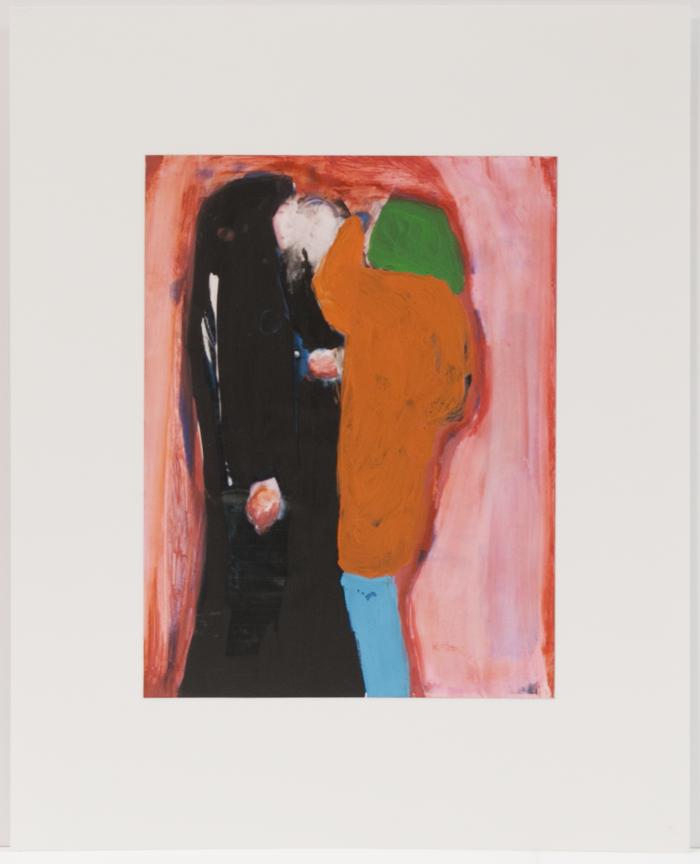 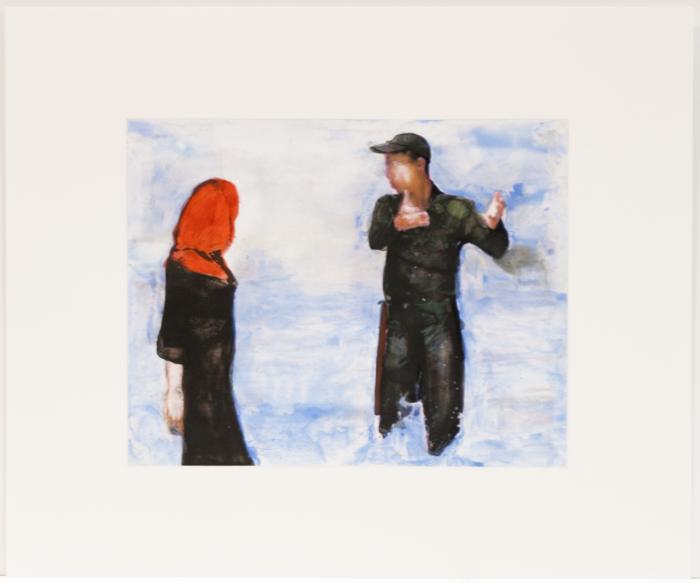 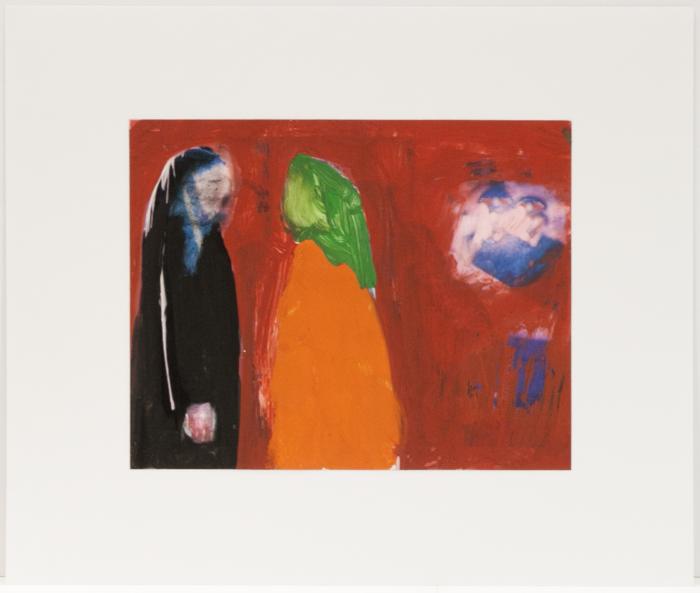 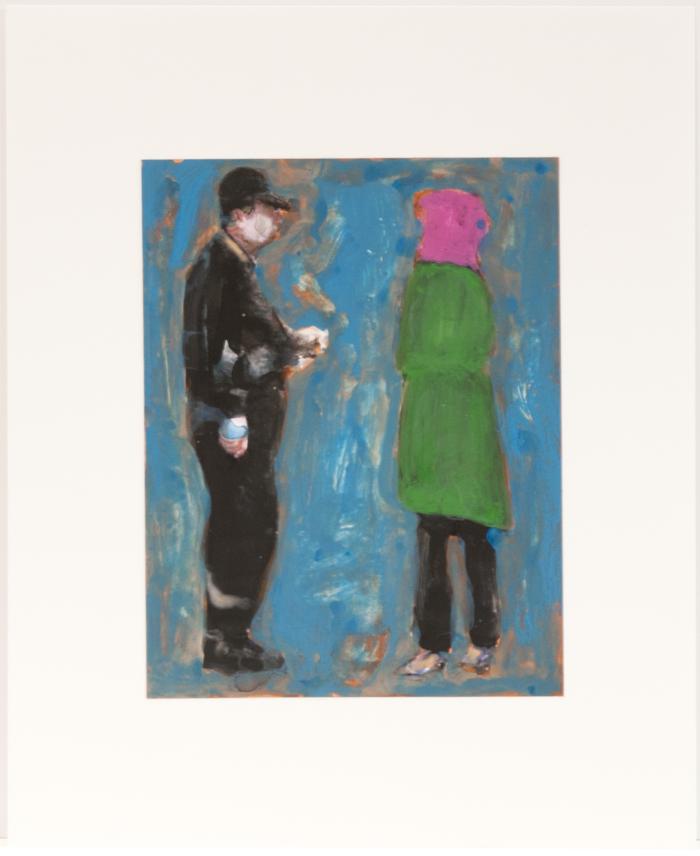 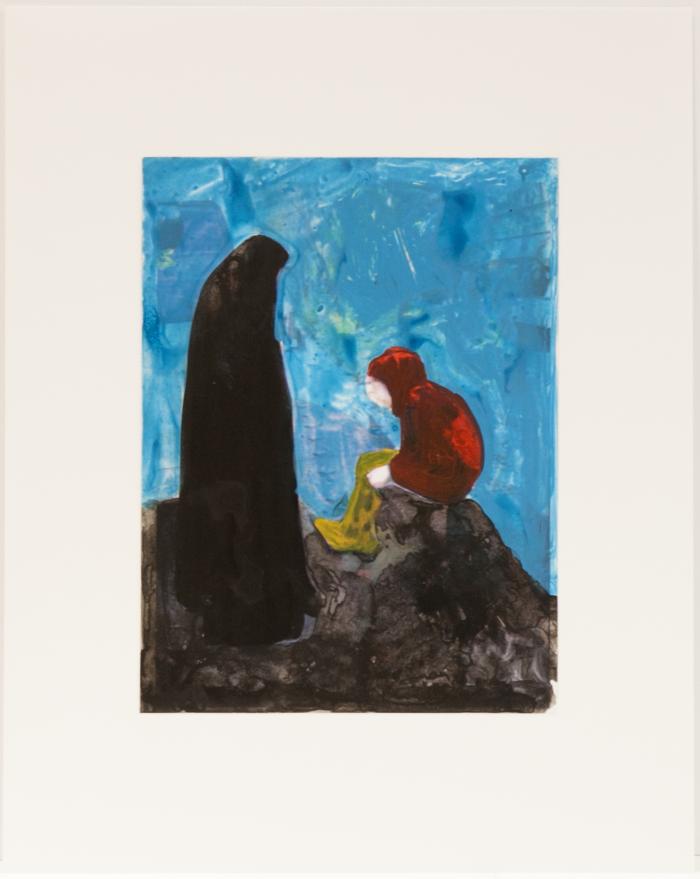 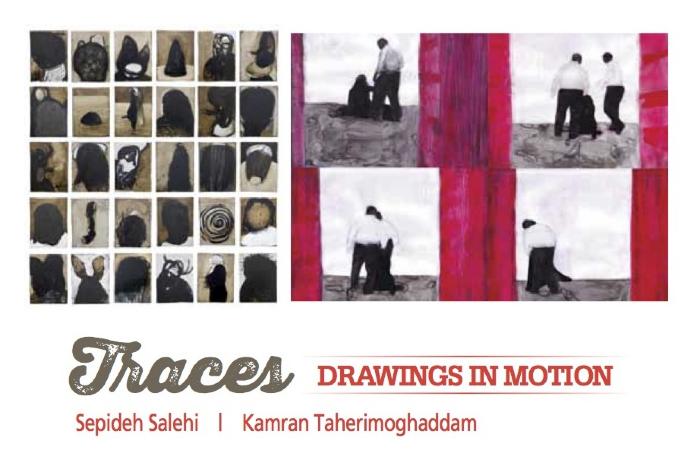 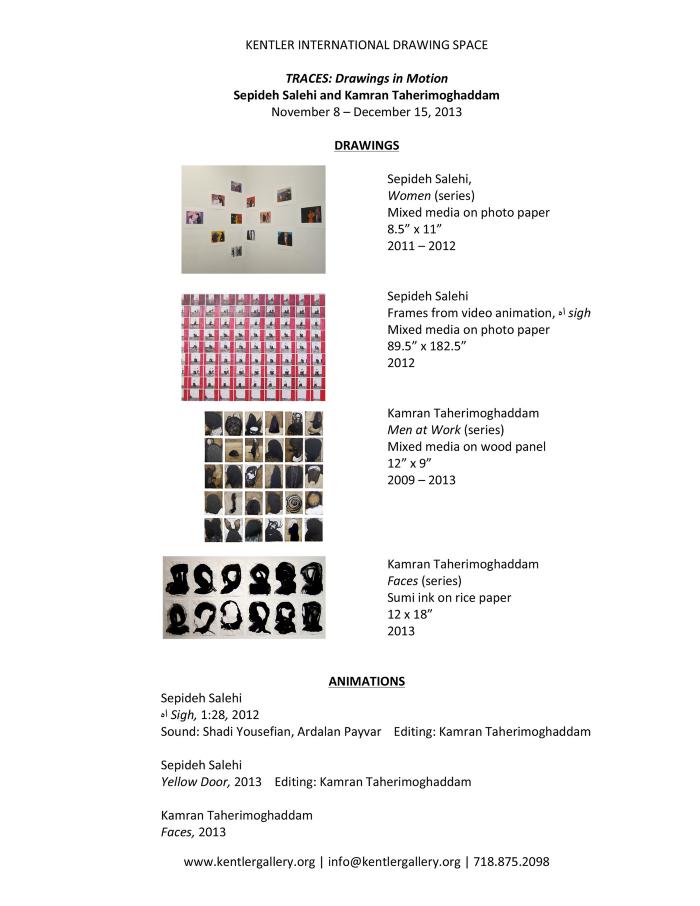 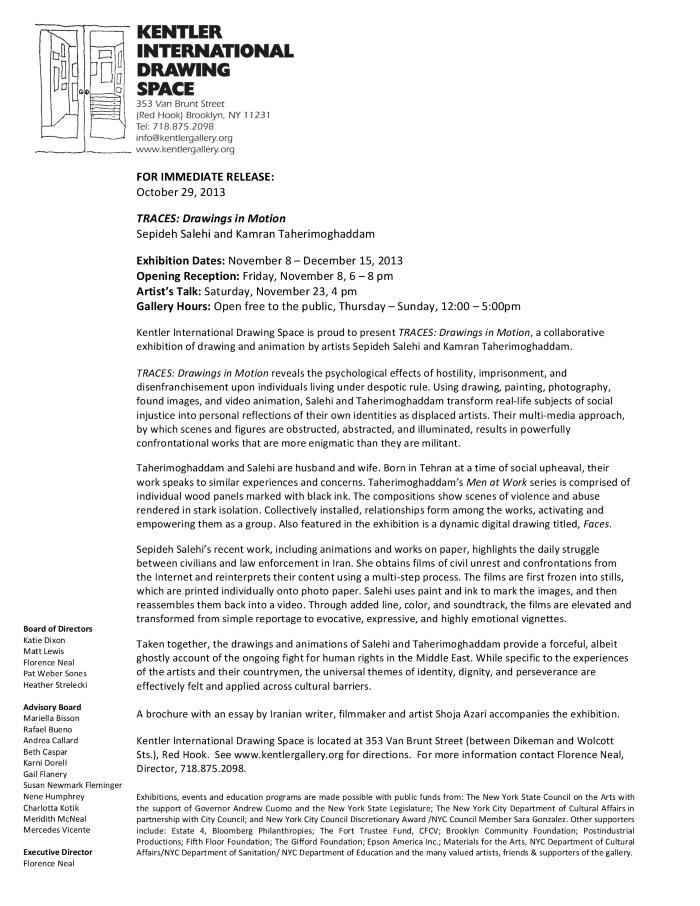 Sepideh Salehi and Kamran Taherimoghaddam’s new bodies of work, while different at first glance, share striking similarities, most notably, their minimal approach to form and their underlying subject matter. They both tackle issues of repression and atrocity and the psychological implications therein as living, displaced artists. Both are cross-disciplinary, working in a variety of mediums—drawing, painting, photography and video.

Kamran and Sepideh are husband and wife. They are collaborating artists. Together they have seen and feltthe harsh realities of their homeland under theocratic despotic rule. The breakdown of the moral fabric of society, extreme control of every aspect of social and personal life, infliction of injustice and cruelty on a daily basis and new economic hardships due to sanctions, etcetera have pushed people to their psychological limits. Kamran’s and Sepideh’s art is not only an attempt to make sense of the unfolding madness, but also to recover and heal through the power of art.

Kamran’s Men at Work, a series of equal- sized, starkly drawn wood blocks, form a multi-layered archive of graphic events. Here, the artist desperately but faithfully traces the memories of psychological shock and repression back to their emotional origins, where they were severed.

While this intimate disclosure is heightened by the very enigmatic presentation of each piece with minimal rendering, the relationship of each block to the next and together as a whole has a direct, forceful and meaningful impact on the viewer.

So much as the aesthetic, harmony and shape of each block tend toward enclosure and completion, they clash with one another leading to a necessary disorder and instability. While each block forms a singular totality and determinism with its overwhelming domination of monstrous and repressive dark figures, the overall composition of blocks together renders this monstrosity ineffective and diffuses it into uncertainty.

The power of oppression and of the oppressor is in the creation of the condition of helplessness and fear by instigating a state of psychological isolation. A fearful, isolated and fragmented mind that can only perceive the overpowering reign and rule of monsters is easily subjugated and controlled. Kamran’s single block most effectively captures and produces the very core of the emotional pinning and the psychology of isolation and helplessness, yet the Gestalt of the composition of blocks as a whole allows for the possibility of overcoming the sense of fear and isolation.

In effect, by allowing the viewer to see the chronological unfolding of the events in relation to each other, the absurdity and the illusion of the structure of power is effectively revealed. Here, the very practice of art itself has become the artist’s struggle and victory over the overwhelming onslaught of the forces of repression. In this sense Kamran Taherimoghaddam’s art is highly personal and its power and impact are directly the result of its very honest and intimate nature.

The artist’s experience of violence is felt through the dark mutter of paint sinking into the skinlike wood surface, viscerally felt, yet visually distancing. In The Wisdom of Art, Roland Barthes describes painting as a kind of stage on which an event unfolds, permanently altering the spectator. Kamran’s Men at Work is an abstract, painted, personal documentation and chronology of events depicting scenes of violence and human rights abuses that would leave no spectator unchanged.

Sepideh Salehi seems to be grappling with a similar predicament in her work. Yet in it, the overwhelming machinery of oppressive power is confronted directly. This head-on collision is perhaps due to the fact that women’s control and repression is tied to the very moral and ideological core of the despotic theocratic regime in Iran. The control and oppression of women is key to the survival of the regime and, conversely, one cannot imagine a free society without the liberation of women. It is perhaps this naked, unmediated injustice and existential violation of women that leaves no room for the possibility of finding rescue in abstraction in Sepideh’s work.

Sepideh’s work, like Kamran’s, is a recording of the chronology of unfolding events, but in contrast to Kamran, who creates characters who are fictitious shadows of reality, Sepideh’s characters are real actors of real events. She utilizes the video recordings and documentation of these disturbing events from postings on social media and other sources. She then dismantles the events to their singular frozen moments in time as a series of still images. Each one of these still images is then printed onto paper that becomes the artist’s canvas.

At first glance, the alteration of the found images—with the application of simple, bold colors—leaves the impression of aestheticizing these horrifying events. Yet once they are reassembled into the moving image, albeit one with a different frame rate and an added sound track, the new video becomes impregnated with a strong feeling of nostalgia. It is in fact this manipulation of the viewer’s feelings that changes the found clip from simply a journalistic recording of an event to a work of art.

The added vivid colors in motion create a dreamlike psychological state where strong positive and even happy memories are often evoked. The human voice and accompanying vocalization further augments such associations, which stand in sharp contrast to the harsh and painful reality of the unfolding event. The viewer is caught in this contradiction and unless the conflict is faced, negotiated and resolved, cannot dismiss the event as yet another report of abuse or an atrocity soon to be forgotten.

—Shoja Azari is an Iranian-born writer, filmmaker and artist. He currently lives and works in New York, NY.