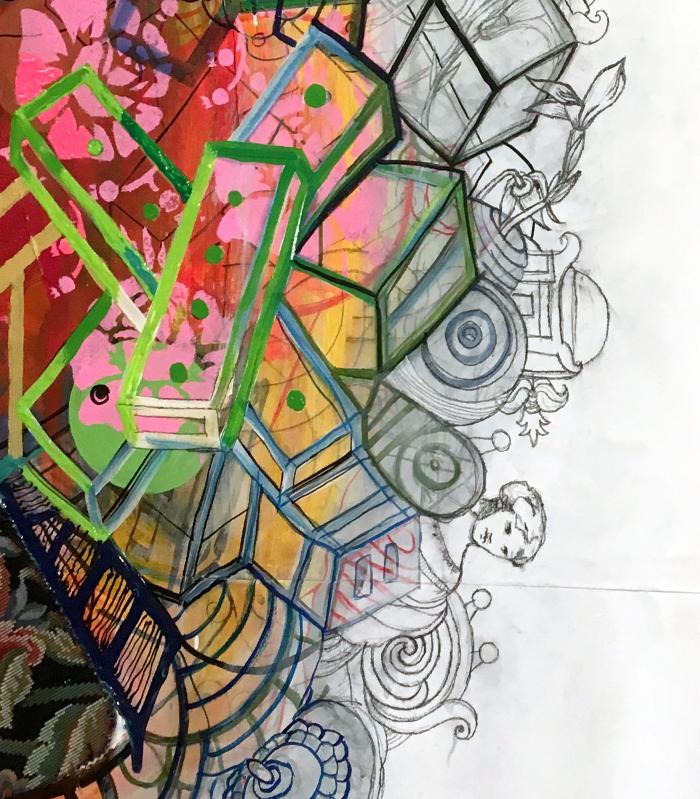 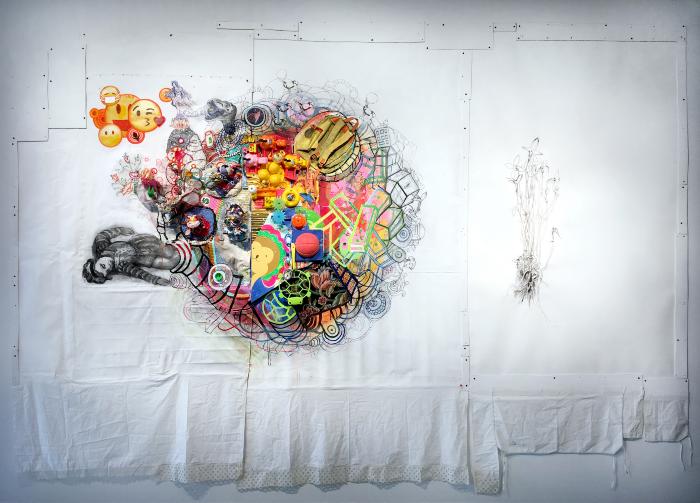 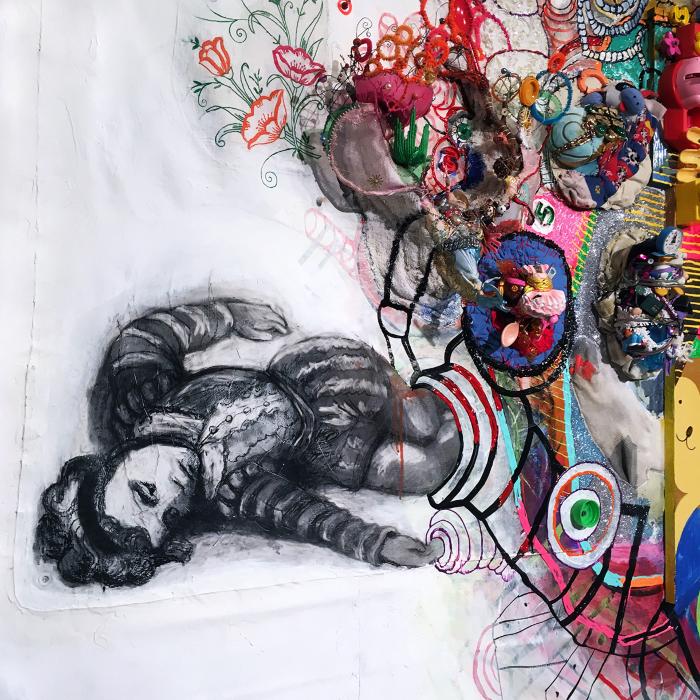 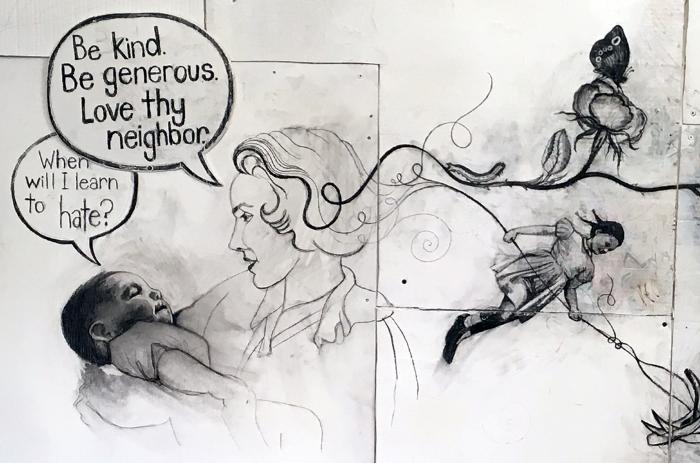 THE SYSTEM (The Roots of Dark Money, Love and Hate), Detail, 2018, Charcoal on paper 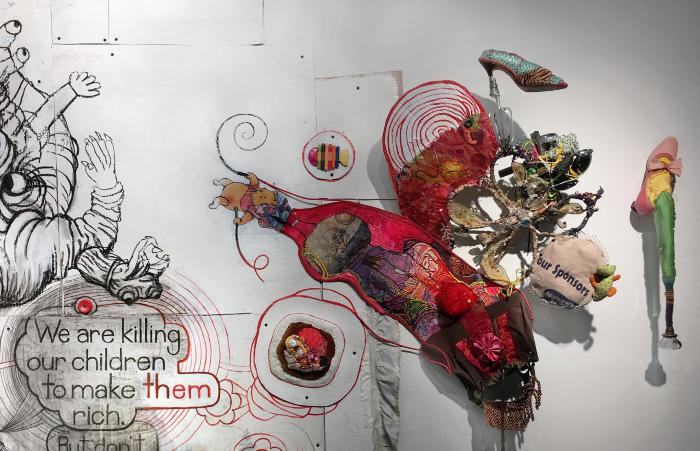 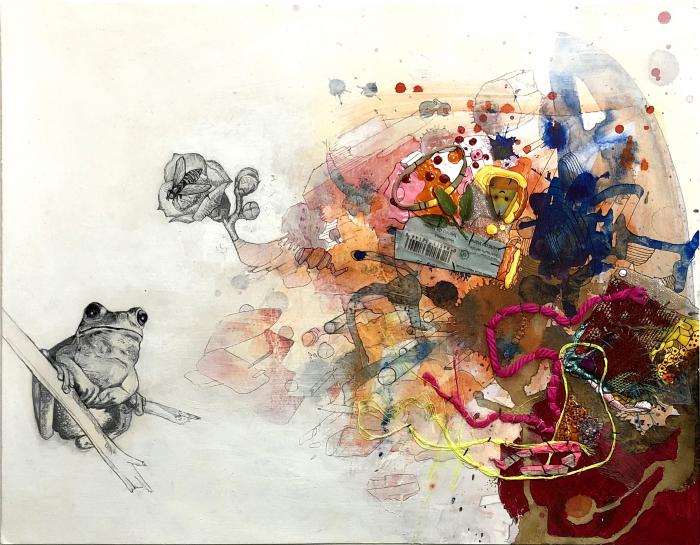 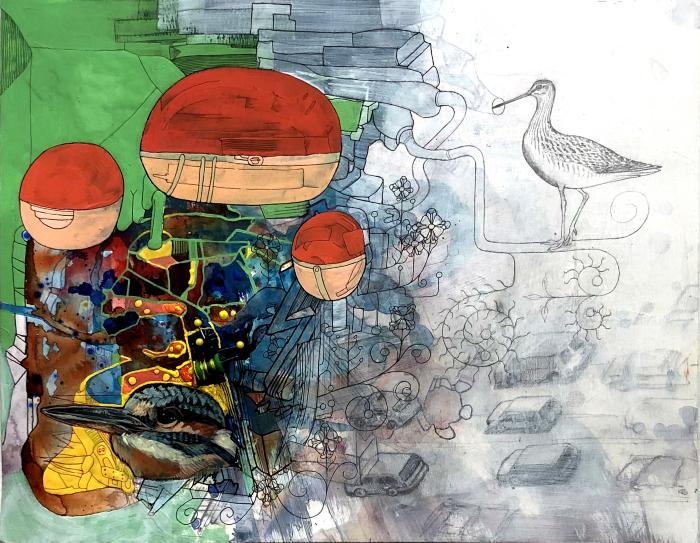 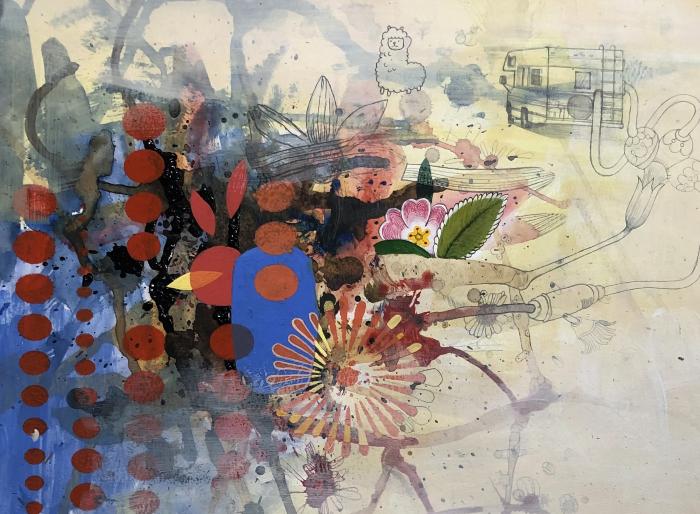 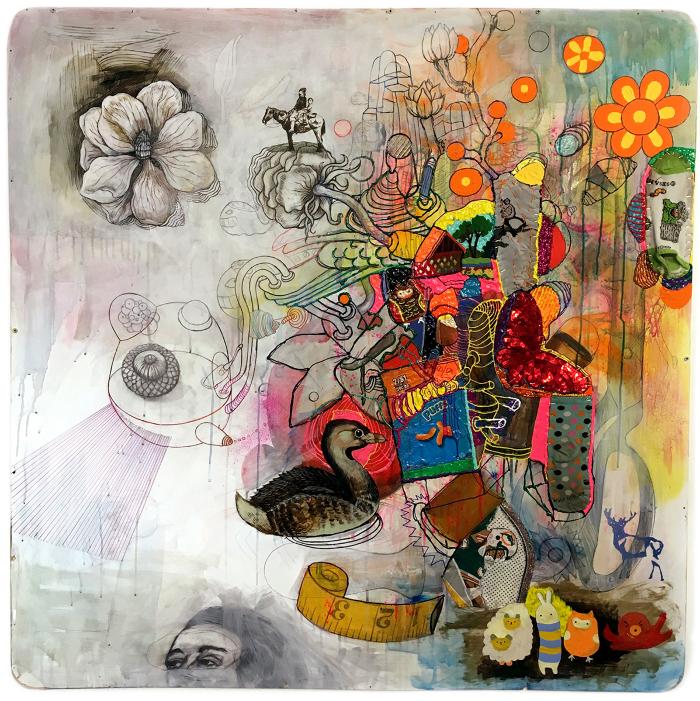 THE IMMIGRANT (They are using me to distract you from the real problem.), 2019 48” x 48” x 1/2”, reclaimed wood, used socks and fabric, embroidery, fabric paint, acrylic, pencil, Cheese Puffs bag, charcoal. 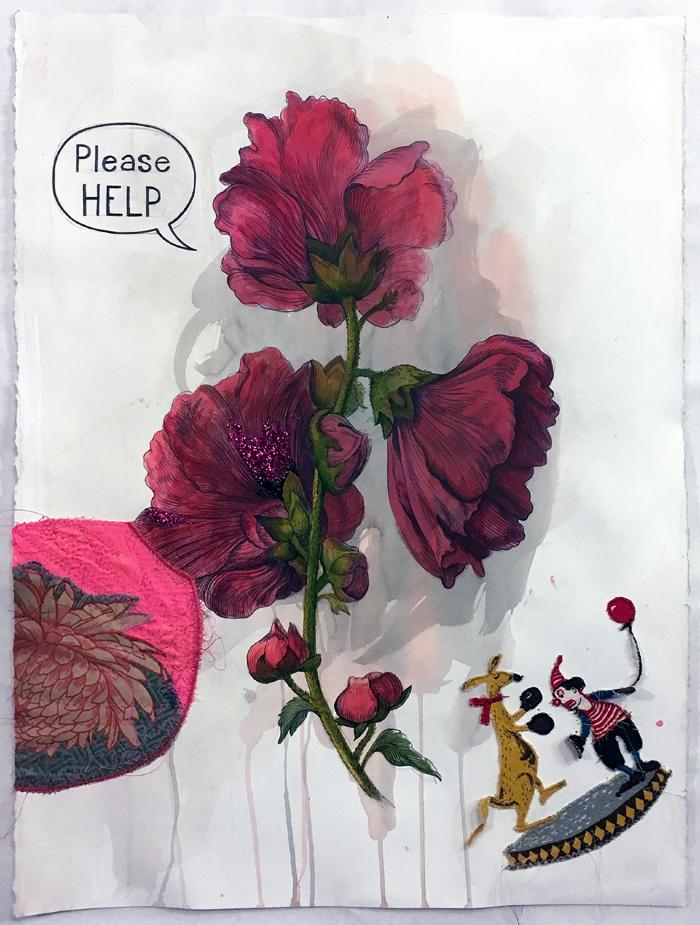 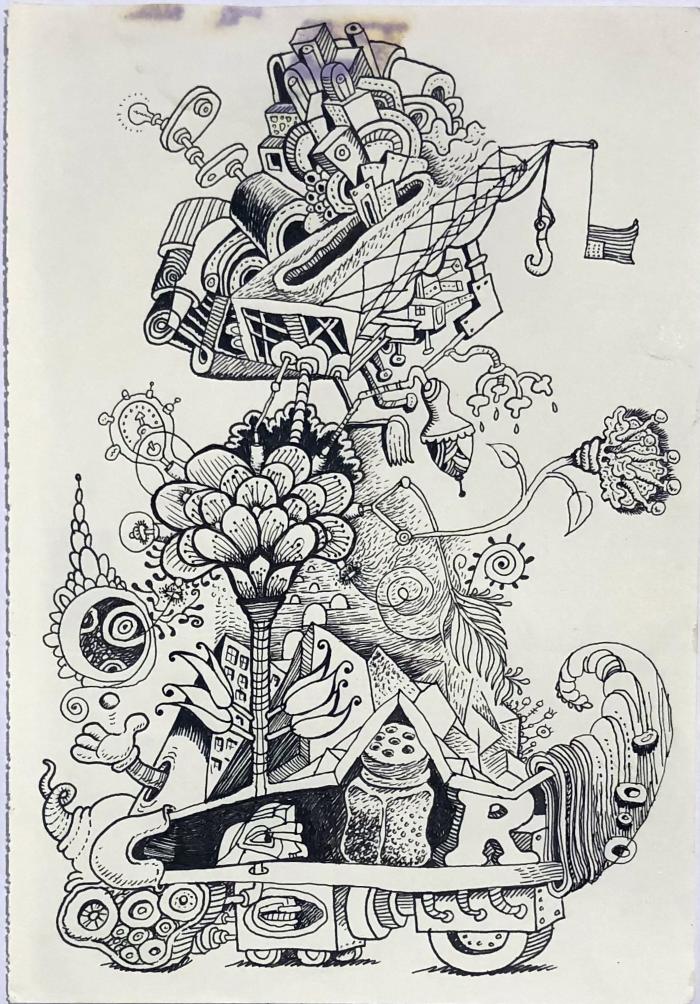 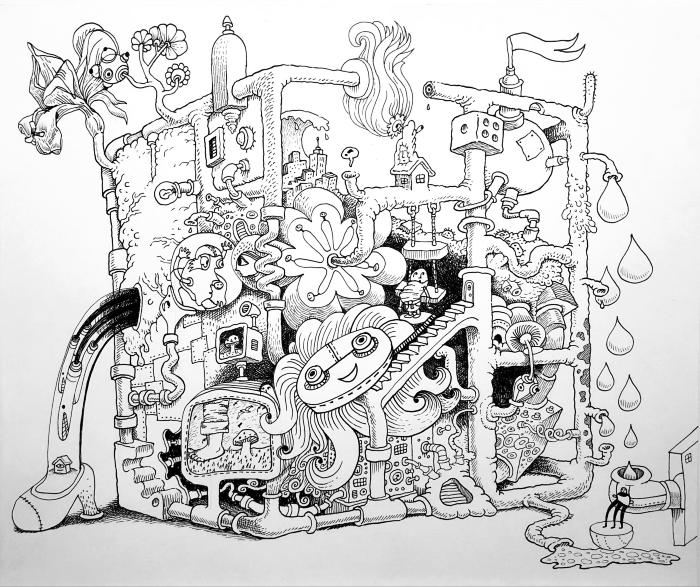 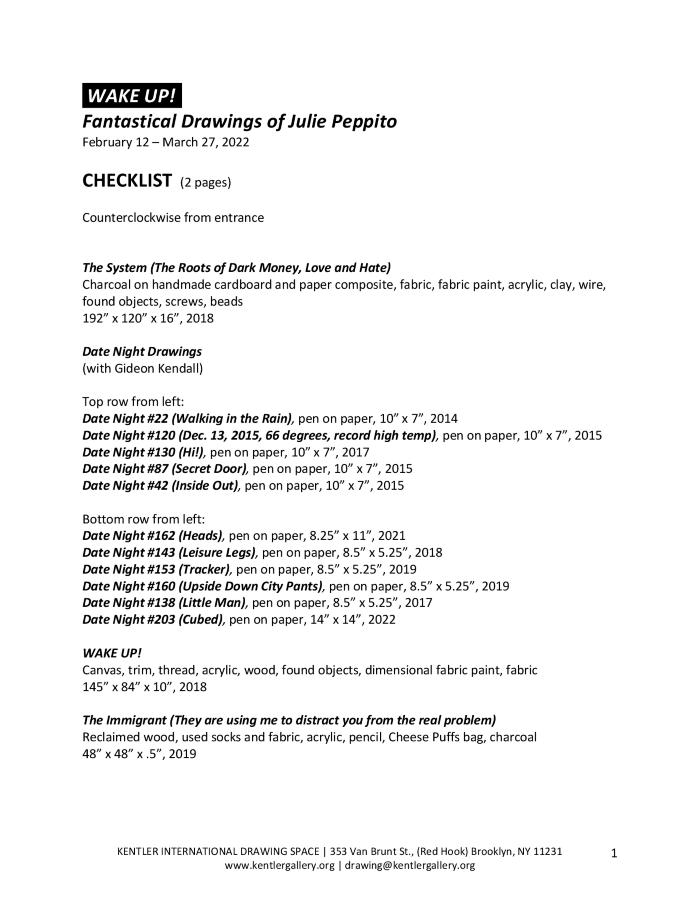 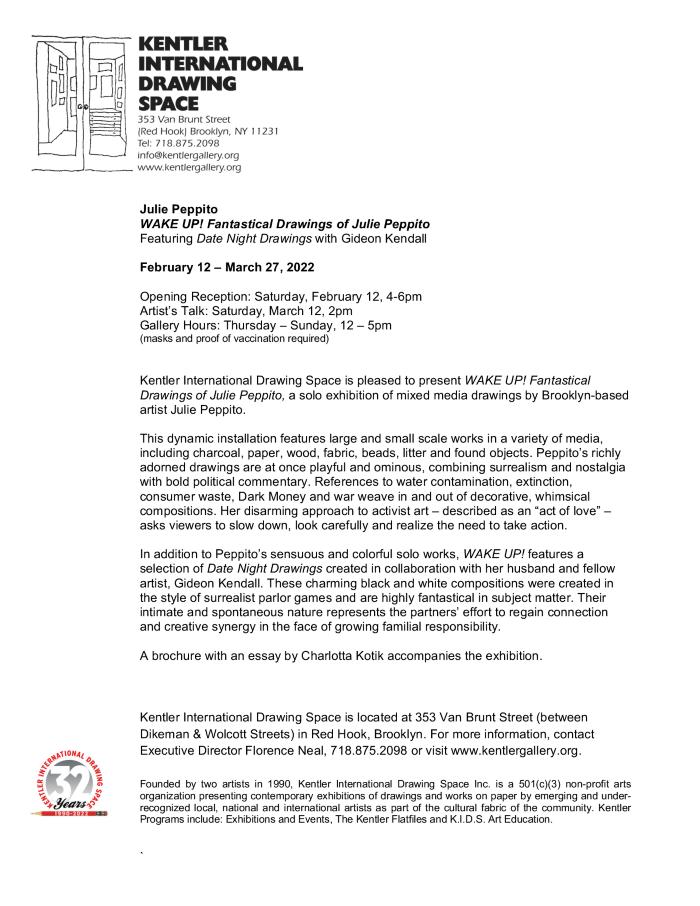 February 12 - March 27, 2022
A brochure with an essay by Charlotta Kotik accompanies the exhibition.


The Wake-up Call of Julie Peppito

Julie Peppito balances her roles as an artist, activist, educator, mother, and indispensable partner to her artist-illustrator husband, Gideon Kendall, with aplomb. Her creative approach reflects her many interests and abilities, daringly juxtaposing media and techniques, and intertwining them within phantasmagorical compositions. Peppito’s charcoal and pencil drawings are often adorned with layers of colorful fabric, miniature quilts, buttons and beads, stitching, and fragments of plastic toys and utensils. The seductive qualities on the surface of her work underscore an urgent message – our world is drowning in the flood of overproduction that is destroying our environment, health, and planet. We pretend that more is always better, while only a fraction of the world’s population benefits from the unregulated growth that is causing this fateful harm.

Julie grew up in Oklahoma, where an attentive primary school art teacher noticed her uncanny ability to reproduce the likeness of a subject. Julie’s work was entered into a statewide competition and awarded first prize. Encouraged, Julie continued to draw incessantly, later combining her works with collaged elements of fabric, beads, and other materials. She remembers her discovery of these materials as follows: “When I was eight, my family took a road trip from Tulsa, Oklahoma, to Ghost Ranch, New Mexico. My sisters and I were each given a bag of fabric scraps and buttons. I reveled in spending the whole journey sewing shapes and patterns together. I made tiny bags and compositions. From then on, I was hooked.” 1

After graduating from high school, Peppito moved to New York to attend the Cooper Union for the Advancement of Science and Art, graduating in 1992. In an extremely competitive art school within the hard-edged and conceptual New York art scene, Peppito created works bordering on the decorative. Instead of steel plates, video monitors, or expansive areas of acrylic on canvas, her materials were scraps of fabric, paper, plastic, and other detritus of our throwaway culture. The resulting colorful, soft, and malleable compositions were far from appreciated at the time. They were seen as craft, a major offense to the reigning vision of  real “high art.”

Encountering harsh criticism from faculty and fellow students alike, Peppito began to doubt the possibility of ever integrating into the art world. Help came from a rather unexpected source – highly respected Cooper professor Hans Haacke, a staunch proponent of politically engaged art, defended Peppito’s work in a memorable critique. His own practice of seeing art as a tool of political agency impacted Peppito’s interest in scrutinizing larger social issues, ultimately contributing to her political activism. Although Peppito’s practice continued to be questioned, she remained steadfastly on her course. In many ways, her work continues the ideas of the Pattern and Decoration movement of the 1970s, which is currently going through a critical reevaluation amid renewed interest in its ideas and principles, well demonstrated by the 2021 exhibition at Bard College’s Hessel Museum of Art titled With Pleasure: Pattern and Decoration in American Art 1972–1985.

In the frequent literary references and juxtaposition of seemingly incongruous objects and imagery, Peppito conjures up another art movement, that of Surrealism. Peppito explains: “My art often references media and literature as a way of highlighting well-researched, complex information and simplifying it into visually compelling truths.”

There could hardly be a more truthful statement than “Water is Life” inscribed on the face of the 2018 piece of the same title. Here life is given to Peppito’s beautiful rendering of orange blossoms. The work makes us ponder all the abuses to which we have subjected this fundamental element in the name of profit, the scarcity of clean water in many parts of the globe, and all the dire consequences of the catastrophic mismanagement of this vital life resource.

In We Are in Danger, 2022, and Endangered, 2022, Peppito comments on the perilous situation we have created for the survival of a number of species thus throwing the entire ecosystem out of balance.  Be it bees or birds, frogs or trees, the dwindling numbers of many species have adverse effects on the environment and ultimately on our very own lives. These pieces well demonstrate that Peppito’s often playfully whimsical and decorative impulses are in service of profound ideas.

In many of Peppito’s compositions, densely rendered areas disperse into finely detailed realistic imagery presenting narratives reminiscent of childhood –simultaneously innocent but also deeply reflective. In her large-scale charcoal drawings, Peppito gets inspiration from a great variety of sources— we can detect echoes of the art of Hieronymus Bosch or Kathe Kollwitz, of illuminated medieval manuscripts, historical botanical drawings, or contemporary children’s book illustrations.

In Peppito’s work, images of key political figures, activists, and others are combined with memes, quotes, and word balloons to comment on these ominous periods in the world’s history. Ours are times of deep economic and racial disparity, overwhelming natural disasters, nuclear threat, climate chaos, and political instability. In The System (The Roots of Dark Money, Love and Hate), 2018, Peppito explores how the personal experiences of the few can become political reality for many.  She states: “In 2017, I read Dark Money by Jane Mayer, which is about how the radical right-wing billionaire Koch brothers have created a network to take over our country. Shortly after I finished the book, Heather Heyer was mowed down by a right-wing extremist at the Unite the Right Rally in Charlottesville, Virginia. I wanted to understand how someone could feel so much hate that they would drive a car into a group of peaceful protesters. Charles and David Koch were pitted against each other by their father.”

While family situations could lead to destruction and hate, there are alternatives, which Peppito explores in Date Night Drawings, a series of works that she created in collaboration with her husband, artist and cartoonist Gideon Kendall.

Kendall describes the making of these compositions as follows: “In the first ten years of our lives together we made art side by side all the time. Although we didn’t collaborate much and were usually working in different mediums, we were making art together. We were young and childless and our time was ours alone. Things changed drastically when we moved into a house and had a child. Now we were trading off parenting responsibilities and sleep opportunities, working at different times and in different parts of the house because our studios were no longer adjacent. Our one opportunity to enjoy each other’s undivided attention was on the occasional date night or a morning visit to a cafe. In an effort to rediscover the connection we had in the early days of our partnership, we started bringing sketchbooks and pens on our dates, and began to produce the body of work from which the examples in this show are culled. Due to the conditions these drawings were done under, many of them have stains and residue from the food and drink we were consuming in the process. And because of the frantic and disorganized nature of our lives, many of them were done in sketchbooks or random loose paper of variable quality that were often misplaced for years at a time. Our son, Milo, has contributed to some of our drawings as well.”

These portraits of domestic accord are an oasis within a show that continually challenges its viewers to take urgent political action. Peppito comments on her piece Wake Up, 2018: “I feel like it is as important now as it was in 2018, before the election when I made it. I see it as a giant illustration of how overwhelmed and immobilized I felt by the constant stream of news, lies, assaults on democracy and attacks on our safety and environment. Wake Up! was a call to action for myself and everyone around me, so that we wouldn't give in to the lie that we are powerless. We have shown what we can do when we act together. We must wake up again, right now.” Julie Peppito is an ardent activist – she not only attends rallies and protests diligently, she also contributes her talent, creating arresting signs and placards calling us to action. There are many reasons to get involved – social and racial inequality, dire environmental degradation, climate change, and the protection of voting rights all need to be urgently addressed. Through the centuries, art has been an agent of change, with artists, being largely progressive freethinkers, charting the road map for innovation. Creativity and collective action can lead to a collage of resistance so succinctly depicted in Peppito’s output.

Listening to Martin Luther King Jr. speeches on a recent MLK Day, Peppito was once again captivated by King’s framing of activism as an expression of Radical Love.  She comments: “It feels right. It is at the essence of why I made The System (The Roots of Dark Money, Love and Hate)—to try to understand and love "my enemy" and get to the essence of how we can "love our neighbors," and I believe as King believed that the answer to hate is love—that we need to bring more of it into the world.

“As an activist I feel I am often mischaracterized, as someone who is aggressive, angry, and hateful when in reality the root of my activism is a deep love for humanity and nature.”

1. From the interview with Julie Peppito in TextileArtist.com.
All other quotes are excerpted from e-mails we exchanged during  December 2021 - January 2022 that Peppito kindly allowed me to use.

— Charlotta Kotik is a writer, independent curator, and lecturer living in Brooklyn. A native of Prague, she has worked in major American museums and is a Curator Emerita of Contemporary Art at the Brooklyn Museum.