exhibition
robin holder, Access & Inequities: I Hear You. Do You See Me? 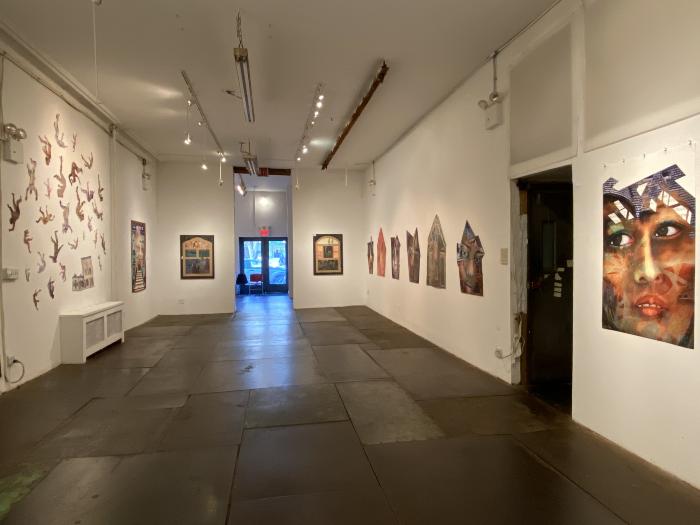 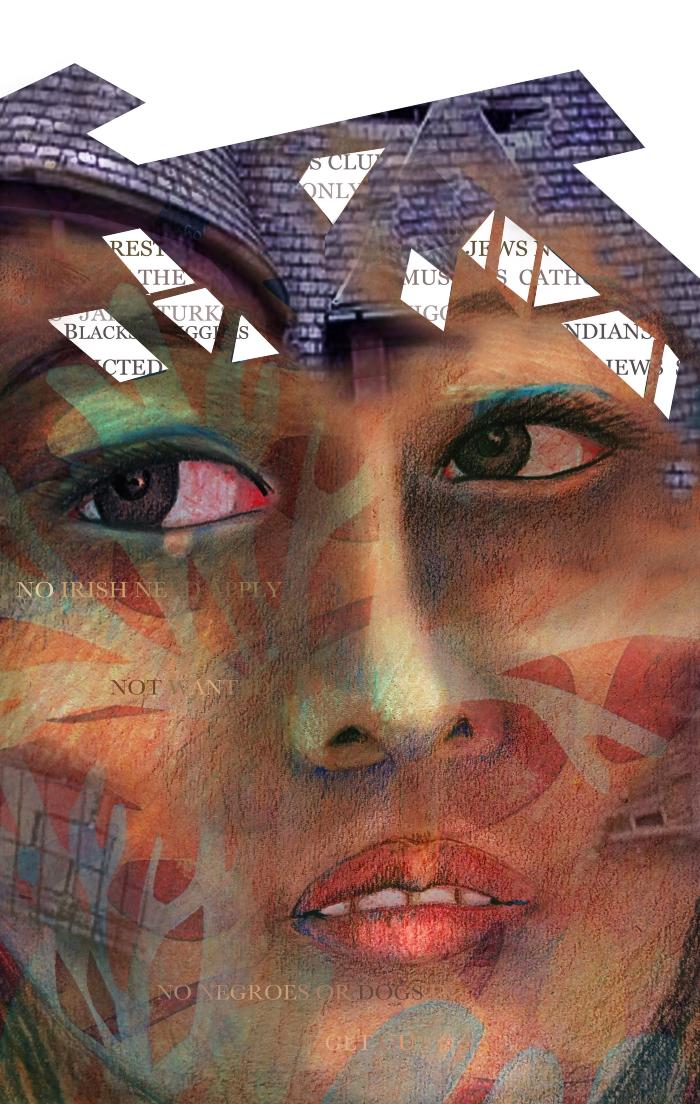 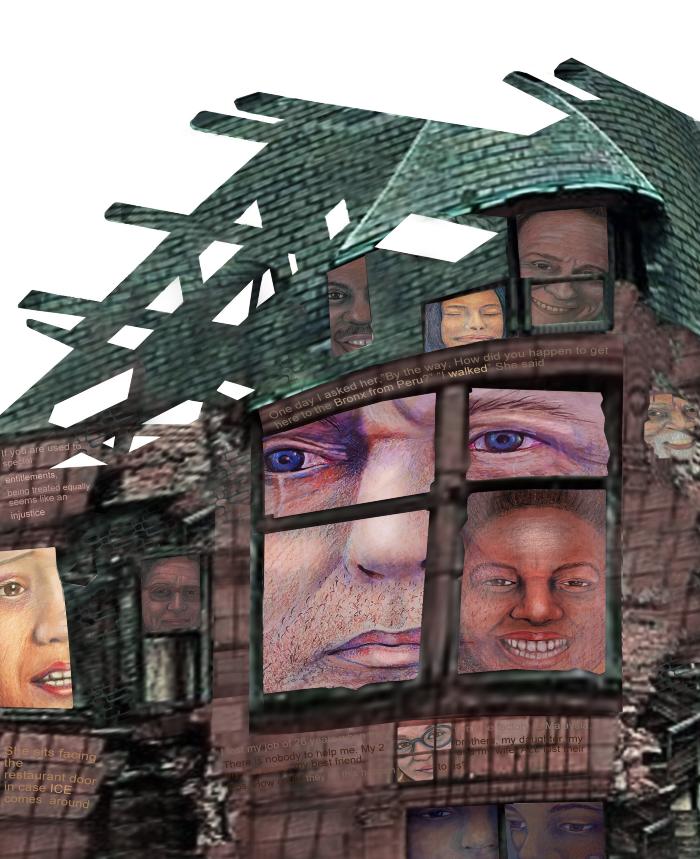 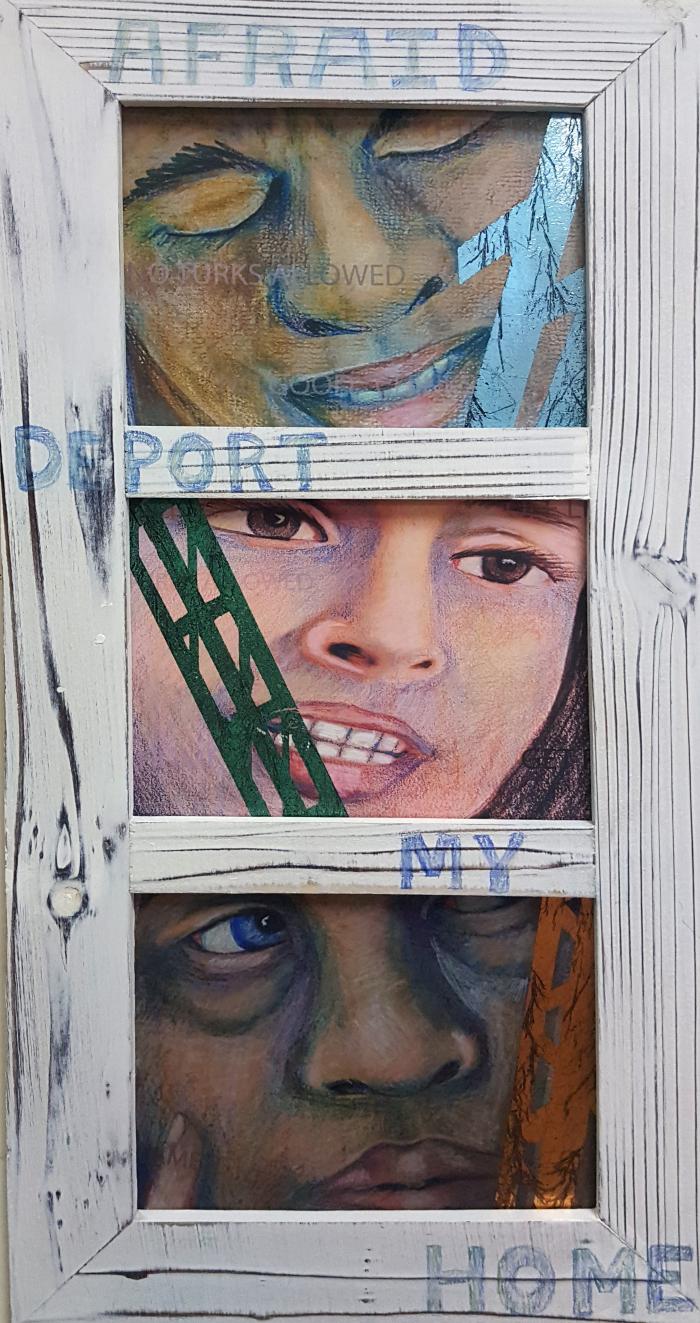 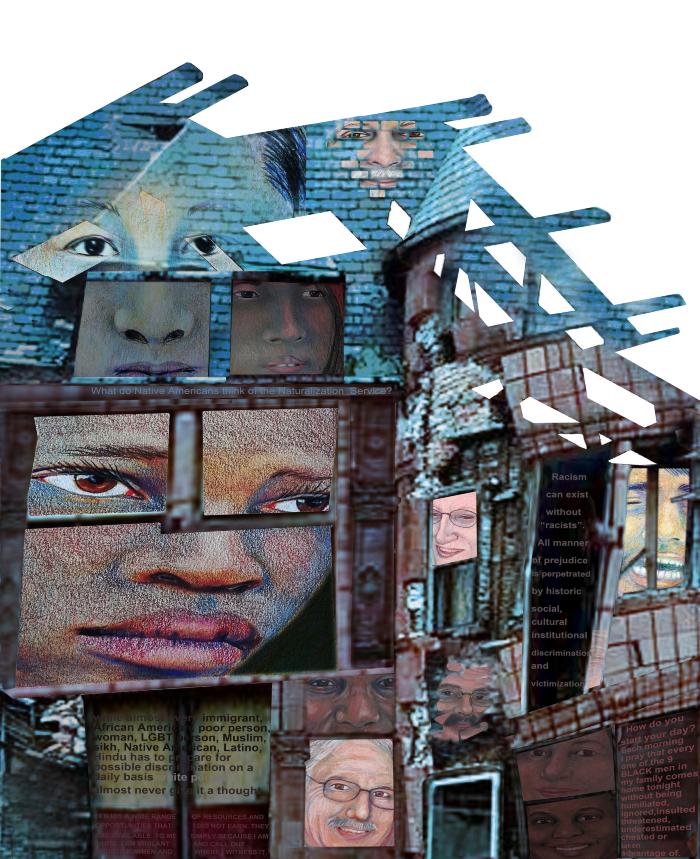 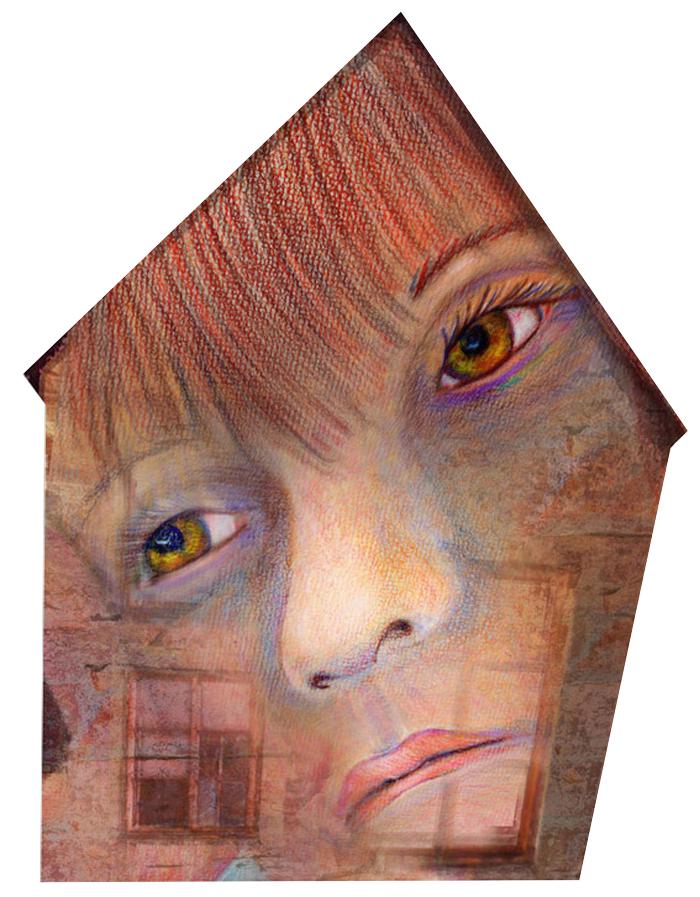 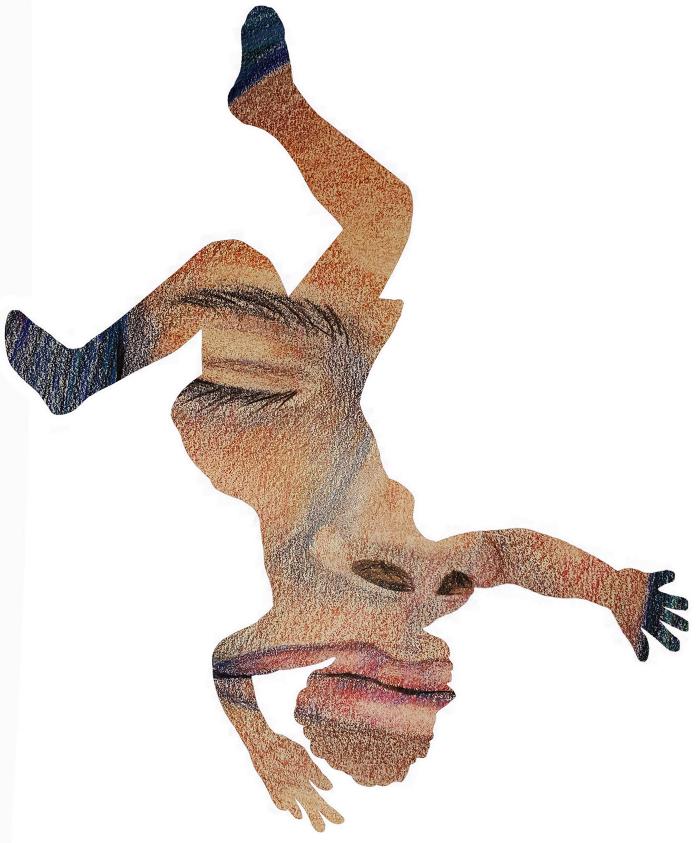 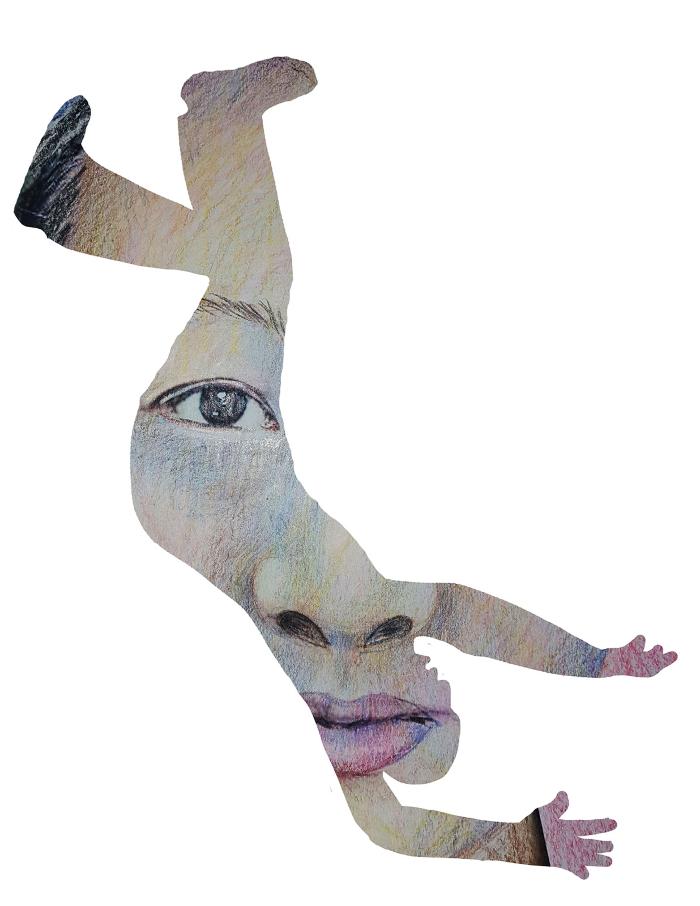 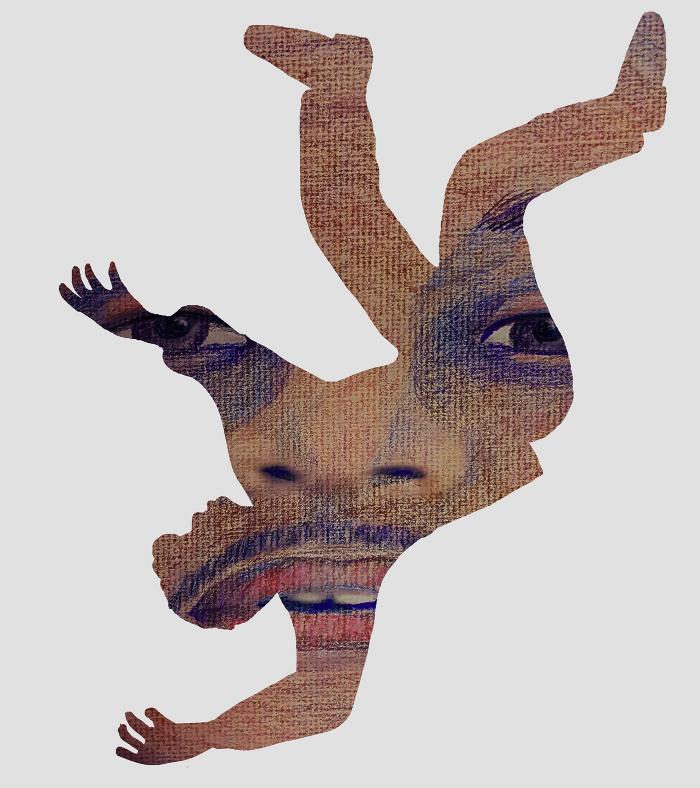 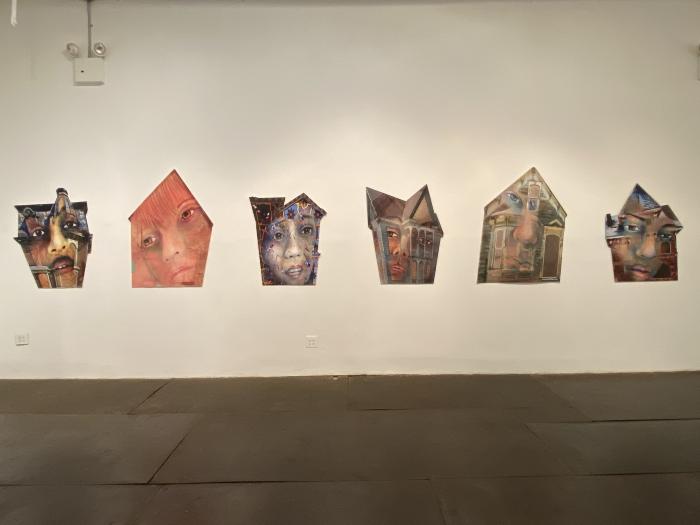 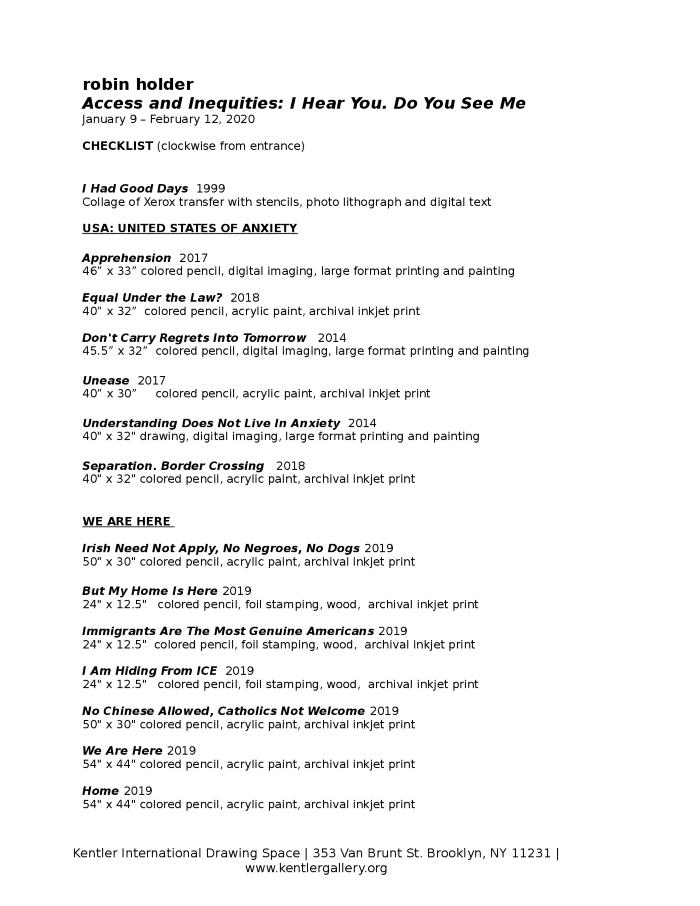 ROBIN HOLDER
Access & Inequities: I Hear You. Do You See Me?

Kentler International Drawing Space is pleased to present Access and Inequities: I Hear You. Do You See Me?, a solo exhibition by artist robin holder. A brochure with an essay by Dr. Halima Taha accompanies the exhibition.

holder’s work explores the theme of home and its many implications, including identity, family, race, migration and upheaval. Using the house as a primary motif, she illuminates the American Dream’s crumbling vision of prosperity. Though the concept of home is universal, social and economic disparities create devastating polarization. Where one feels safe and secure, another is deeply unsettled.

This multi-media exhibition features drawing, collage, printmaking, stencil, digital manipulation and text. The new works build on a series began in 1999 with an Individual Visual Artist Grant from the Brooklyn Arts Council, culminating in a twenty-year examination of displacement in New York City. A lifelong activist, holder’s mission is to question and challenge the status quo. Above all, her drawings dignify and humanize their subjects (many of whom are real people), imbuing in viewers a heightened sense of empathy and understanding.

Access and Inequities: I Hear You. Do You See Me? is part of Kentler’s Focus on the Flatfiles solo exhibition series.
A communal dialogue titled Kentler Connects: Where is Home? will be held in conjunction with the exhibition on Saturday, February 1 at 4pm.

For and About the People: robin holder

Do you have hope for the future?  Do you think American lives are more important than the lives of people from other nations?  Do you think your basic rights are being eroded?  Do you think a society where one out of nine young black men are in prisons is acceptable? Does cultural identity mean that it contradicts the national identity of citizenship? These are some of the questions that many Americans are asking about the United States during Donald J. Trump’s presidency.  They are also the same questions that robin holder explores as part of  a process for her artistic activism in  Access & Inequities. I Hear You. Do You See Me?

The ideal of people from seven continents living in the United States as social equals has always drawn its greatest power, not from legislature or legislation, but from individual sincerity and symbolic action—not from the Supreme Court’s landmark decree that  separate is inherently unequal in the Brown vs Board of Education decision in 1954, but  by the brandishing image of national Guardsmen escorting tender-faced black high school students through a venomous crowd of white bigotry and fear.  Perhaps this accounts for the powerful visual impact of the contradictions in  America’s relationship with black and brown people, that enables the work of  robin holder to connect diverse audiences.  Her innovative, integrated, and layered use of monoprint, photo lithograph, linocut, serigraph, stencil, foil, and transfer printing with painting, drawing, and collage presents an accessible vocabulary for cultural and social literacy.

Access &  Inequities:.  I Hear You.  Do You See Me?  is comprised of 35 works on paper that summon viewers to reflect upon the American ideal that posits a society in which everyone gains personal freedom and opportunity by trading their individual ethnic identity for a national identity.  holder contends both distinctions can  simultaneously remain intact.  When citizens pause, interact, and consider how mortal similarities and differences critically strengthen communities, they shape a world that encourages inclusion and a greater humanity.

holder’s work challenges power hierarchies through a dynamic  and thoughtful practice that  incites responses to encourage people to make compelling intellectual shifts, resulting in honest interactions. People begin to listen, see, and accept  one another from a place of self-reflective understanding. This exhibition includes selected works from three ongoing thematic series.  Set on a global stage, upon which human behavior is featured with dramatic conflicts in the characterizations of equity, race, class, ethics, language, privilege, and citizenship. holder states  “My work is motivated by my multicultural  background, in which layer upon layer of various racial, economic, and spiritual worlds  exist within one family.”

The series Behind Each Window: A Voice explores which  foreign-born residents  become the entitled Americans and which ones remain the disenfranchised.  These works are informed by  oral biographies with holder’s Brooklyn neighbors. They struggled with having to adapt and alter their own traditions in order to assimilate into  a new American culture.  What is it about immigrants to America that makes them  more or less valuable to this country and its citizens?  Is it the color of their skin, religious beliefs, suffering or lack thereof?  Are immigrants more valuable to the people they left behind or less valuable to the cultural heritage of a new country that has benefited from their labor, ideas, and culture?

In the USA -United States of Anxiety series, holder creates lopsided  houses as a metaphor for the deterioration of a balanced and integrated country.  The distraught faces reflect the fear, confusion, and depression of its inhabitants grappling with the unsettling reality of losing or being unable to attain the American dream.  holder wants you to pay attention to the complexities that delineate income, education, race, and power.  These social lines of demarcation are juxtaposed with daily inequities that reflect the  necessity to  attain freedom from strictures  of class, gender, race, and  history.

The Falling  Figures series addresses the  current decline of civilization  and how humanity is losing its grasp on this reality. Figures plunging away from healthy values that characterize a civil society is analogous to barbarism and anomie. Corporate and big pharma greed, poor education and health care, mediocrity and status quo has overwhelmed people. Poor, working class, and the nearly middle class are fighting among themselves over race and religion, despite being pushed out of neighborhoods, schools, and services because they can’t afford them.  The provocateurs have successfully distracted them from the essential issues of survival, as they continue to destroy families and communities. Eroding human dignity aka terrorism, is a new American pastime directed at immigrants and citizens.  These American terrorists are Christian white men, not Muslim, brown, or black people. These hurtful and elite biases are based on irrational fear, blind ignorance, and the  belief that  everything contrary to an arrogant Eurocentric world view has no validity.

holder’s  picture narratives are infused with the substance and integrity that her subjects command.   Using her ideas and materials as a catalyst for dialogue is her greatest strength because her work inspires people to change their communities from the influences of the worst societal injustices.   The work of muralists Diego Rivera,  José Clemente Orozco, and  David Alfarro Siqueiros colored her approach to imagery with political undertones to  change unacceptable conditions of inequity between rich and poor people.  holder, like many American artists of African descent, felt a profound affinity for everything the Mexican muralists expressed from the need for equality to the longing for cultural completeness.

Herein lies a prime example of how artistic activism functions as an expression of affect. The power of the imagery motivates people to overcome seemingly impermeable socio-political and moral barriers so they can successfully  remap society’s pernicious patterns with a healthy blueprint. This affect in artistic activism combined with activism mobilizes change with effect and becomes a powerful tool to communicate social, civic, and economic ideology to engage dialogue.

To this end, holder’s work validates paradoxical ideas in which she can meld two or more views, events, or concepts that briefly appear inconsistent, absurd, or contradictory.  Together they operate as distinct continuing forces that are aspects of one reality. This consciousness is aware of duality and difference, yet she does not differentiate one concept as being qualitatively distinctive from another.  Her thinking is paradoxical like a mirror that presents a kaleidoscope of simultaneous, inclusive, and divergent realities that are exposed by her inquiry,  “Do you See Me?”

holder’s  focus on memory, language, and identity, juxtaposed with the effects of  global migration and the politics of civil, cultural, economic, and gender wars, nourishes universal concerns that challenge notions of what it is to be civilized.