Focus on the Flatfiles: Igniting the Pendulum 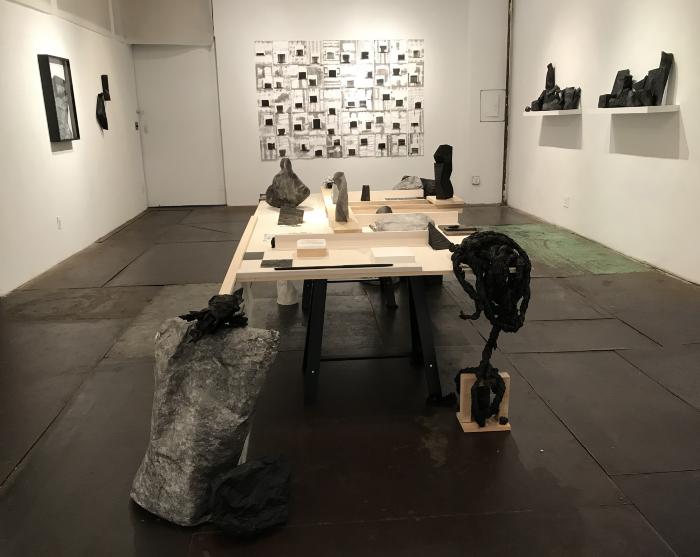 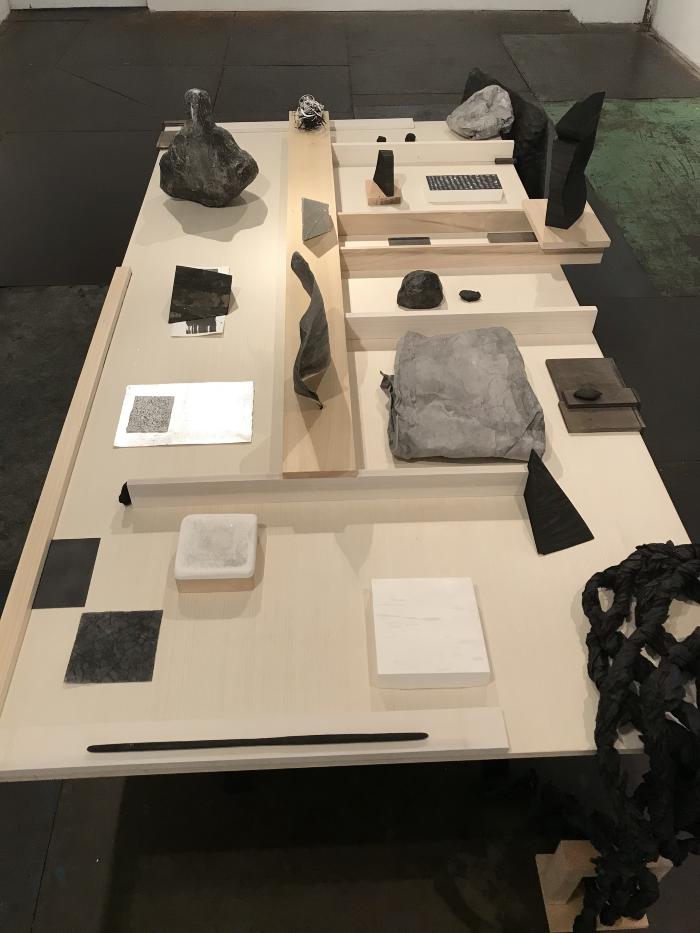 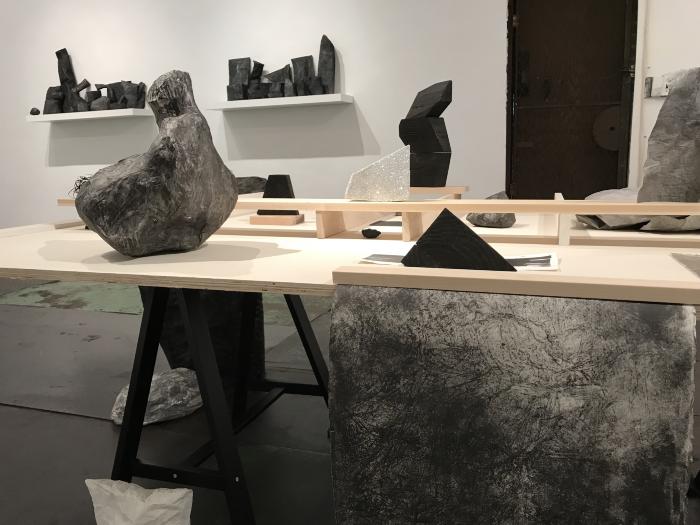 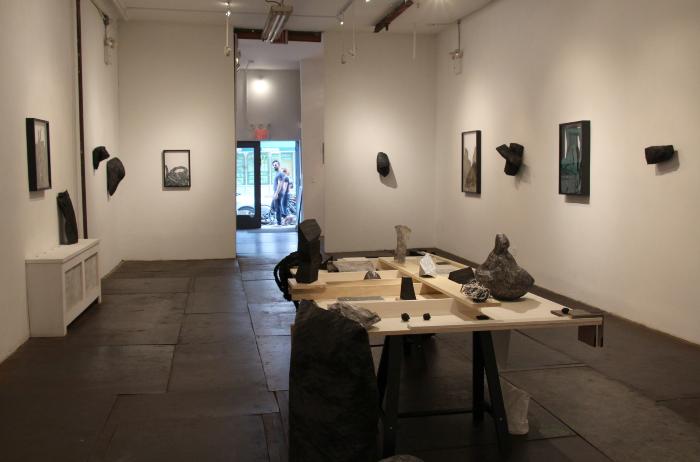 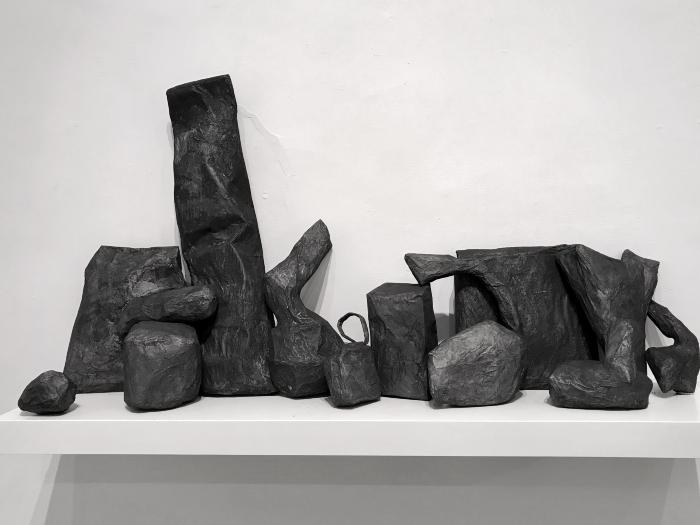 Hannah Israel, "Those who surround me most closely", loose graphite on Hanshi paper, 2019 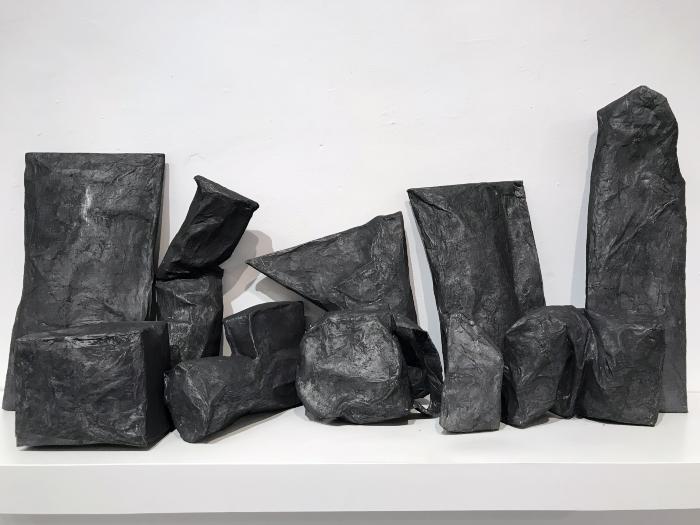 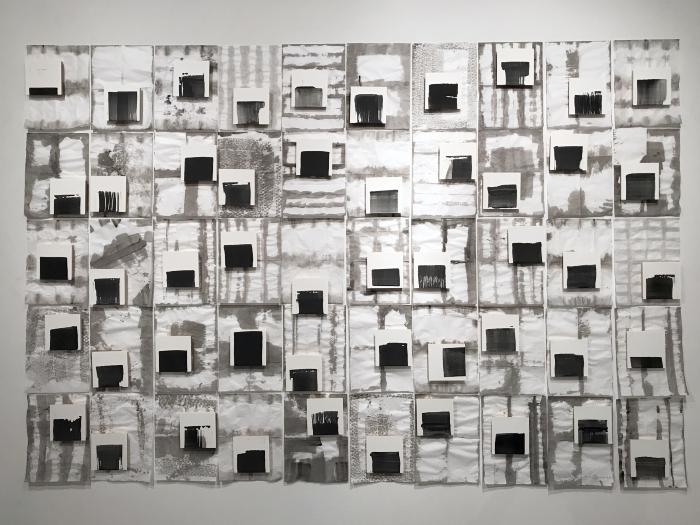 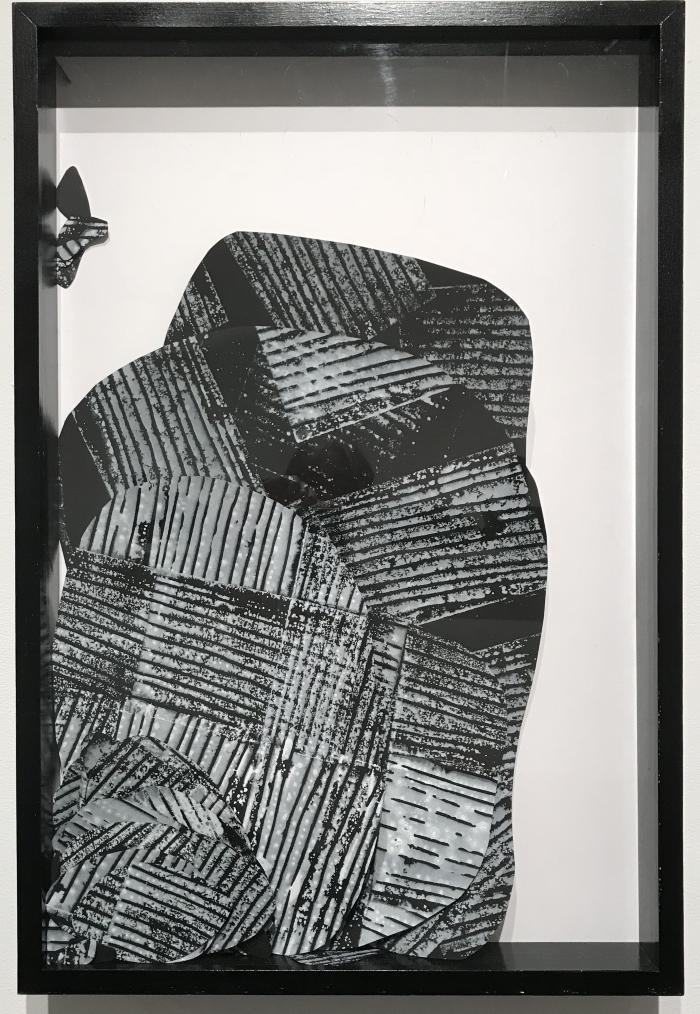 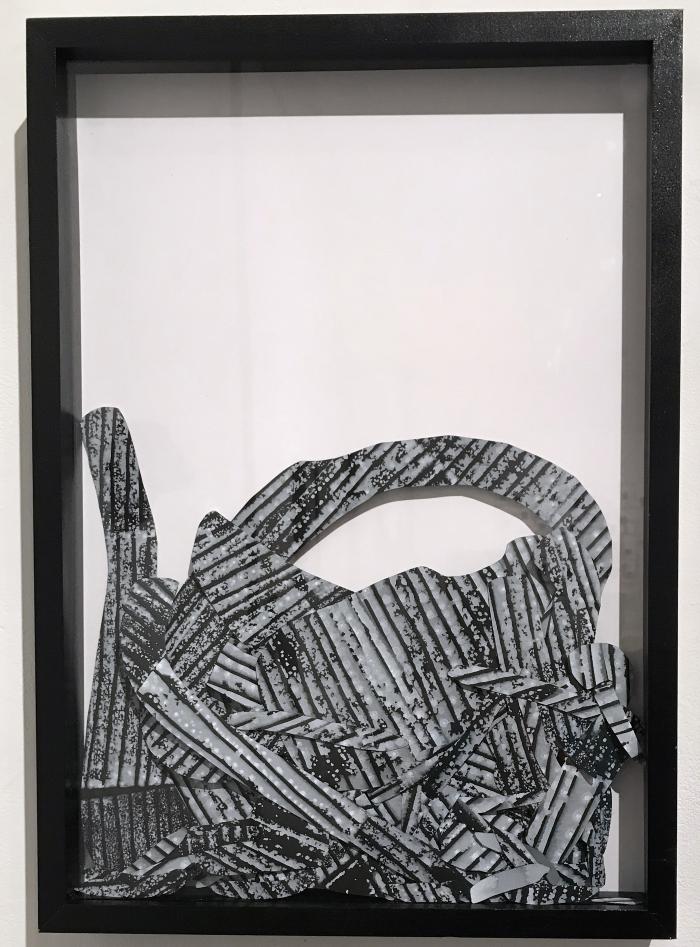 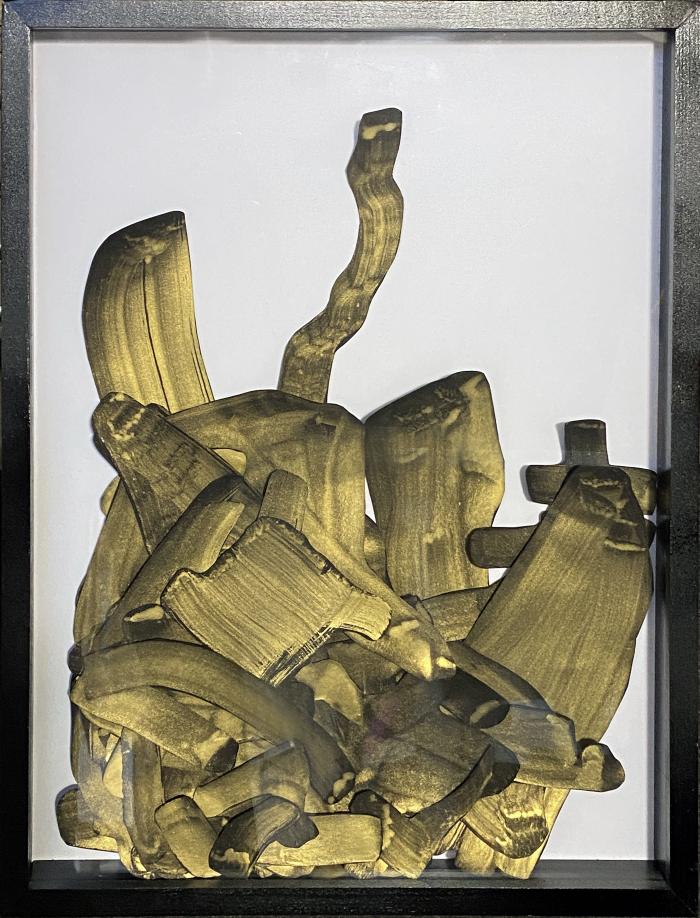 The Phenomena of Where Proximity and Fragility Lay in the Balance

The evocative title of Hannah Israel’s exhibition Imagined Language serves as a proposal to expand upon the way we map our existence, developing kinship among disparate parts, to imagine a multitude of new possibilities – where, perhaps a language emerges in response to the phenomena of space, time, memory, and relationships. Israel painstakingly makes and then systematically gathers her crafted objects to convey larger systems of information and tangential relationships to imply new meaning. As an abstract compendium, her concise collection of individual objects (parts) create a larger ensemble (whole) as an existential exercise in building knowledge upon itself.  Israel is motivated by optimism, as she maps the past and present with hopes that the imagined language materializes and helps us navigate the unpredictable future.  This navigation to possibilities is based on constant change and restructuring of our built environment and the interiority it protects. While the human figure is not literally present, human fragility and connectivity are invoked, as she generates an agile space for the everyday to acquiesce beautifully as abstracted form.

The utilitarian objects Israel referenced in previous work were recognizable, in a language we understood. Like an alchemist, she now mixes and makes ambiguous abstractions to address things we do not know. Her move to a clean abstraction asserts a new vocabulary, exquisitely laid out before us in a fresh tabula rasa—her blank canvas for the transformation of language into pure potential.

As a production site, within the gallery, there is no definite beginning or end, and no center. One enters into a happening, to discover an unfolding in the midst, as terrain for simultaneity and simulation. Construction, repurposing, and reconstruction occur concurrently. Objects are clearly dependent on each other, while simultaneously emphasizing a fragile disconnection. The site presents individual placeholders or stoppages followed by slippages, props, and hinges precariously balanced as to embody our human fragility. The stoppages create a respite for pause and reflection.

Through mark-making, using simple organic materials such as craft and rice paper, ink, graphite, glue, and pigments, Israel constructs assemblages to evoke the constant negotiation and renegotiation of self and relationships, by opening our awareness to difference and contrast, to repetition and the static, to pattern and line, as a temporal state that is never complete—but always in pursuit, as an admirable endeavor. This pursuit manifests symbolic meaning as an arbitrary necessity as the space in between form—the all-powerful liminal space—generates salient moments in quiet absence.  Paper, understood as a fragile material, is reinforced through acts of folding, sculpting, rubbing, incision, and papier-macheas Israel pushes the boundaries of the medium with a tactile materiality that relates to not being erased, making one’s mark, and working to form meaning in a singular life/object and relationally to the collective experience of being. In this act, a lightness conveys weight and gravitas. The inherent qualities of the paper are shapeshifted as mysterious conveyors of meaning. The sculpture is wonderfully juxtaposed on and between elevated wood pedestals and plinths reveal tension and harmony, as the ordered hierarchy produces great depth to yield limitless potential.

The tabletop platform here is Israel’s baseline for establishing relationships between three-dimensional abstract form, in space, and as a means for delineating the empty space in between. The architectural plane and topographical map function as a site for experimentation and a repository for connecting objects to afford the viewer a birds-eye voyeurism as we experience the assemblage in the round and from above.

The titles and assembly denote a musical score—a lyrical mapping for an unknown future—as a nonlinear adaptation of her proposed imagined language. She physically manipulates her select materials by pasting, tearing, and shredding to create subsets by sorting, shifting, and editing. This additive and subtractive process transforms two-dimensional paper, the vehicle for the written word and language, into astonishing three-dimensional constructs.

In dialogue with tabletops are related items on shelves, suspended hanging paintings, and paper drawings presenting different vantage points with a sparse lyrical line, minimal color, and condensed reference.  These ambiguous arrangements, suggestive of habitat and community are planned in space as individual punctuations or still lifes and collectively suggest transient moments. With a refined formalism, a binary occurs that refers to the way two different objects, or relationships, affect each other.  This effect is noticeable as the focus on what is shared is emphasized over what is not, perhaps a reference to the synthesis between the conscious and unconscious mind, especially that which remains inaccessible. Such dichotomy is echoed in Israel’s use of stark contrasts: between black and white, hard and soft, positive and negative, order and chaos, individual and collective, and inclusion and marginality.  These tensions, albeit subtle, create a persistence of form that is intuitive from assembling and reassembling—a continual process of becoming and the passage of time.

One experiences an Imagined Language only temporarily, as do the sum of the parts assembled here, perhaps never to be reconfigured again. The phenomena of place, space, time, and the material world are rendered abstract and strong, and beautiful as the continuous renewal behind Hannah Israel’s constructed environment, in perpetual becoming, reflects the generative power of juxtaposition and language. The fleeting stillness of this exhibition, in reliant balance of itself, communicates a desire to relate and belong and leave an imprint, thus affirming the proximity of our collective human fragility.

Special thanks to The Creative Motif Fund for their support of the exhibition publication.