Focus on the Flatfiles: Echo Echo 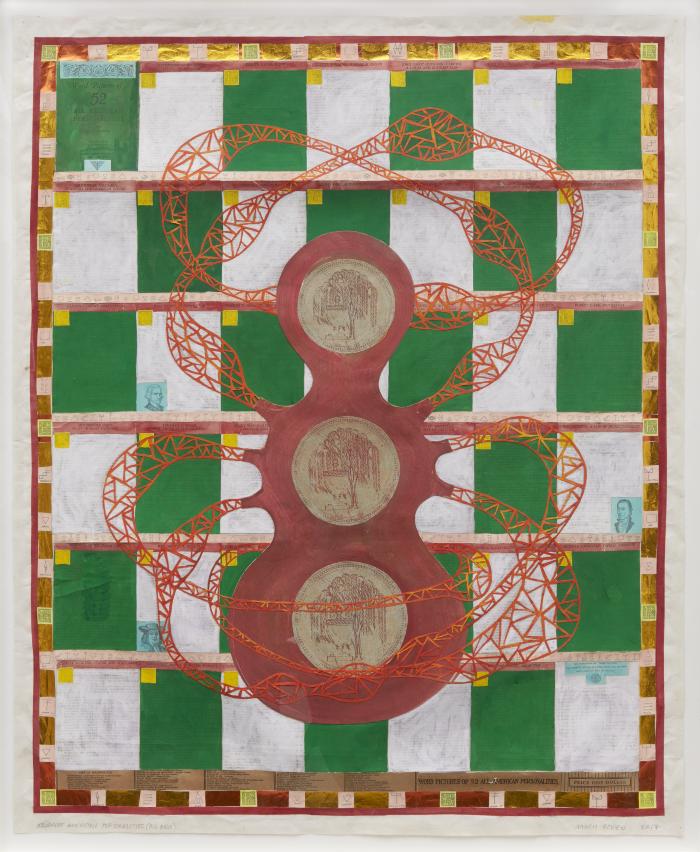 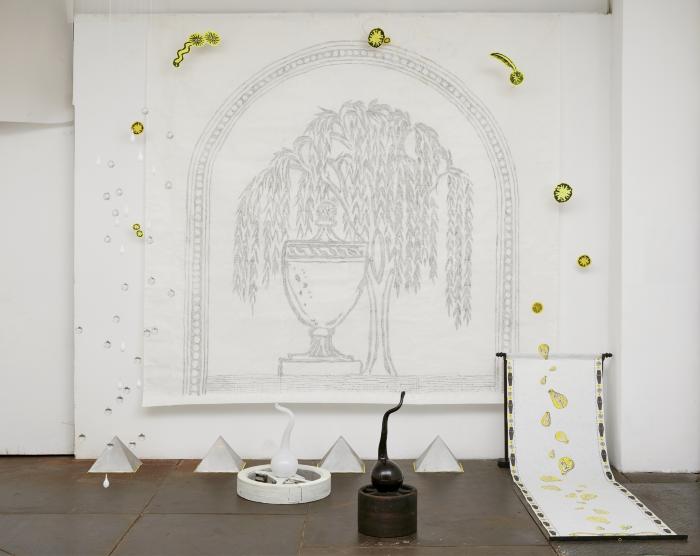 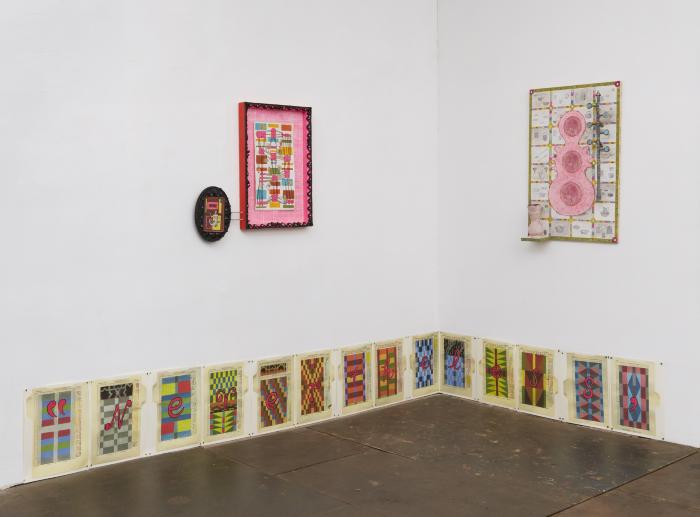 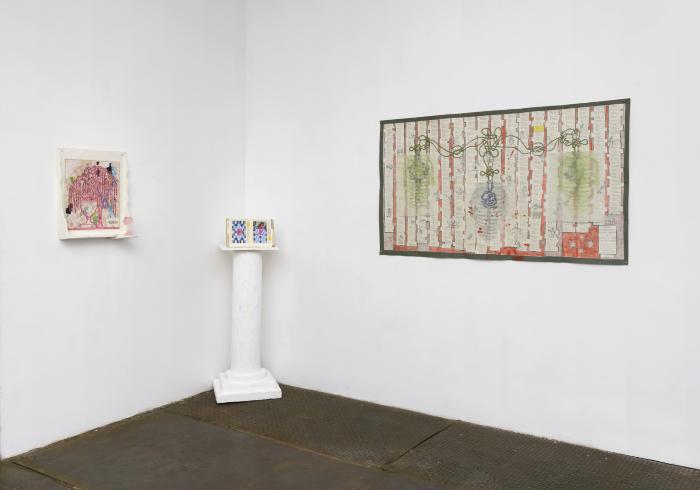 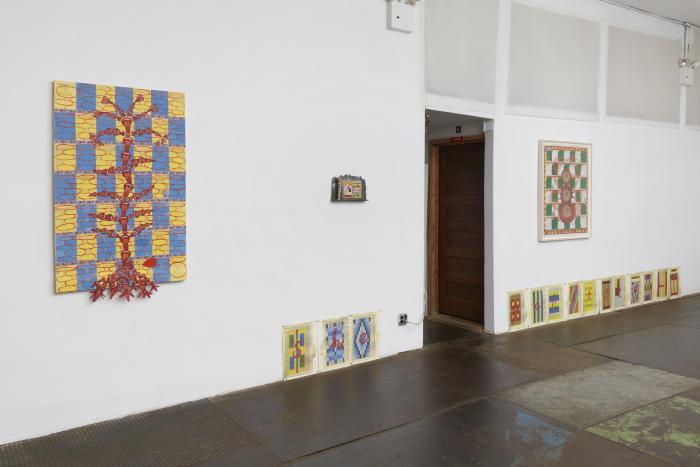 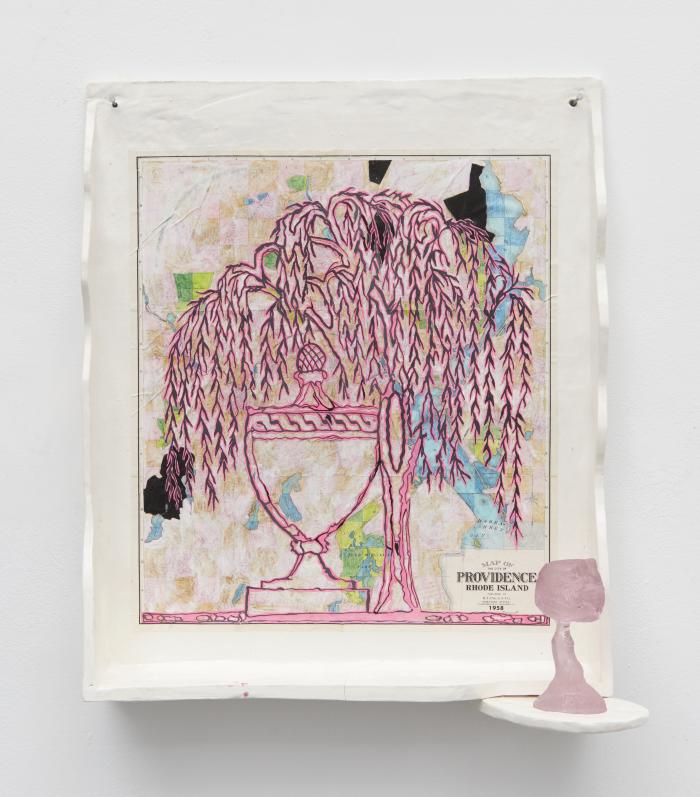 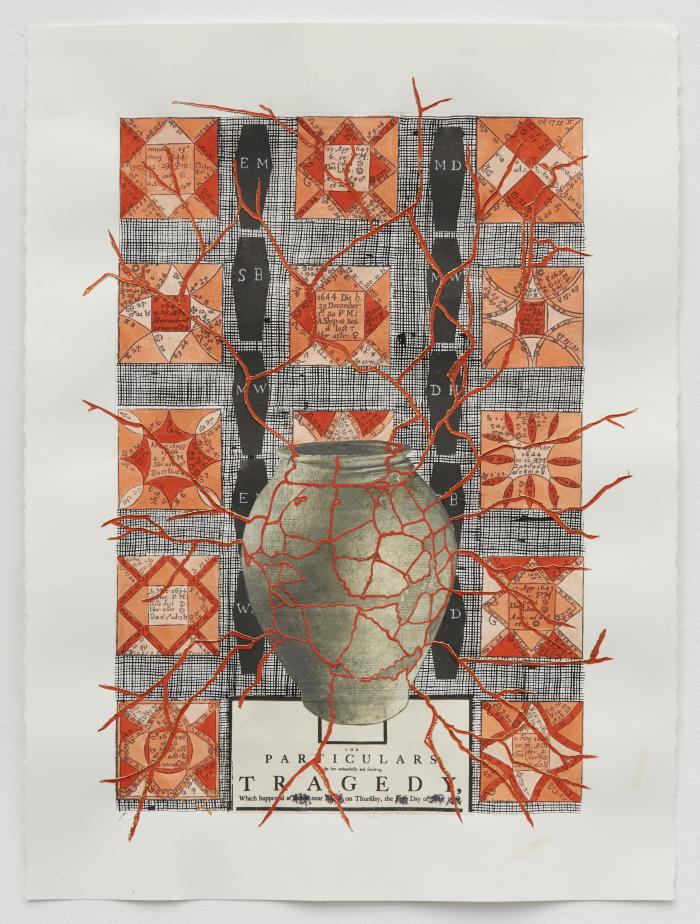 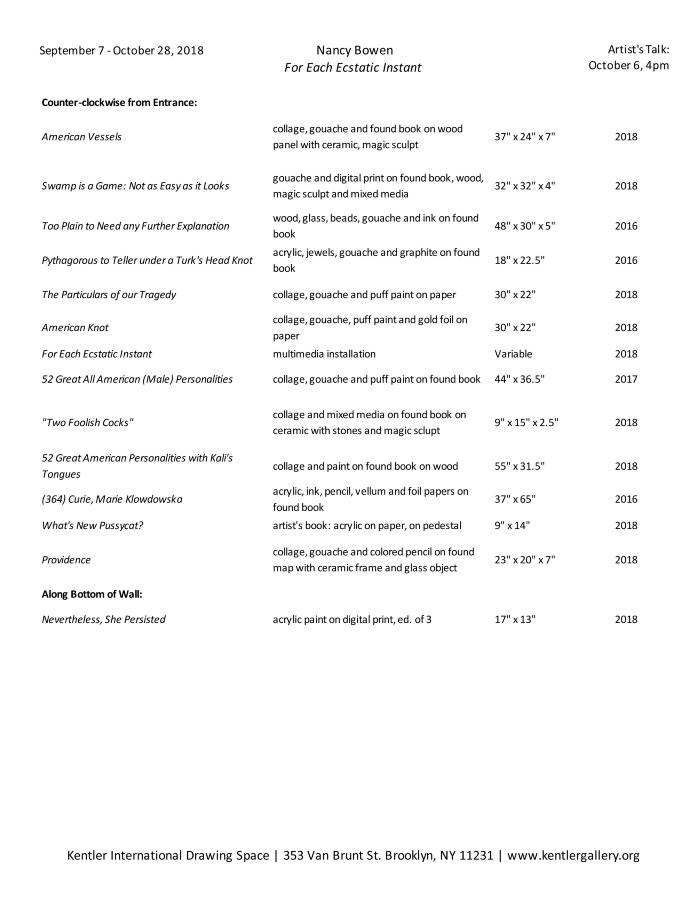 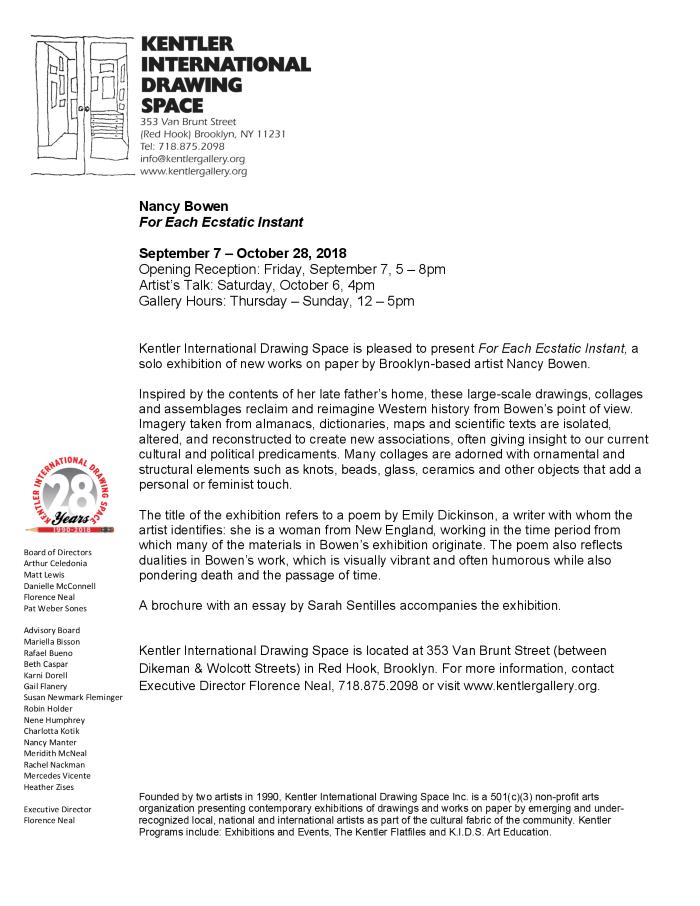 Nancy Bowen: Behold, I Am Making a New Thing

Nancy Bowen calls herself an “artistic archaeologist,” and in her exhibition For Each Ecstatic Instant, you can see the fragments of her brilliant excavations: maps, engravings, pamphlets, stamps, glass, picture frames, and pages from books on scientists and language and personalities and enamelware and customs and hopscotch. Bowen reassembles what she unearths and raises questions about what counts as knowledge, about who has authority to name and label and dissect, and about who gets to decide which game we’re playing and whose rules we should follow.

The title of Bowen’s exhibition comes from an Emily Dickinson poem: For each ecstatic instant/ We must an anguish pay/ In keen and quivering ration/ To the ecstasy./ For each beloved hour/ Sharp pittances of years,/ Bitter contested farthings/ And coffers heaped with tears. Bowen composes her pictures like poems and hopes the viewer will read them that way, too. Her painted and text-filled collages place joy and mortality, hope and despair, side by side, and these images do want to be read, asking the viewer to slow down, to look carefully, and to have a sense of humor.

In Shady Shelfy Singsong, Bowen collages entriesfrom an 1833 dictionary–night, oddity,revolution, serenades, worthlessness–and then paints colors and shapes that look at once like chakras and cells and beadwork. She labels the dictionary entries by color, the key along the bottom revealing the categories: Tools, Nature, Geometry, War, Architecture, Naval, Clothing, Music, Home, Travel. Bowen connects the dots, rearranging and juxtaposing modes of knowing that have been kept separate. Energy systems in the body and molecules and language share the same space, exposed as meaning-making systems with material effects; they are revealed, in the words of my mentor, the late theologian Gordon Kaufman, as imaginative constructions. Looking at this piece, I remember the Pragmatist philosopher Richard Rorty. Stop worrying about whether what you believe is true, Rorty writes. Stop worrying about whether it can be proved. Worry about its effects. Worry about whether you have been imaginative enough to think up good alternatives.i Or, to put that idea another way, in the words of the feminist theologian Elisabeth Schüssler Fiorenza: The question to ask is what your version of the world does to someone who submits to its vision.ii

In The Queer Art of Failure, Jack Halberstam claims collage as both feminist and queer, writing that it works “not through a positive production of the image but through a negative destruction of it that nonetheless refuses to relinquish pleasure.”iii In Bowen’s collages, I see both her refusal of oppressive meaning making systems and her delight in all the possible ways human beings have tried to orient themselves in the world. Color, sparkle, play, ornament – there is joy and protest in this work; there is enchantment and possibility.

Redaction plays a crucial role in Bowen’s exhibition. Tongues and skulls obscure a map of Rhode Island; the pink branches of a willow tree hide parts of Providence; painted squares of red and orange and green and purple and white mark out entire paragraphs. Ever since I saw my first redacted government memo released under the Freedom of Information Act, I’ve been interested in those black lines that block things from view. In these partial releases, there is no effort to hide the fact that information is being hidden. Artists, too, use redaction, but for reasons different than

the government’s. Artists – like Bowen – claim redaction as a critical tool. Redaction troubles what we think we see and reminds viewers there is always misinformation and missing information. Every image is made up.

My academic background is in theology – what I understand to be the critical study of the words humans use to describe god. For me, redaction is a theological enterprise, a visual sign of transcendence, proof of the ongoing and necessary failure of language to describe a god (or a plant or a starfish or another human being), who must, by definition, elude all attempts at capture. When the iconoclasts took hammers to statues, they removed noses first, the place where breath enters and leaves the body. They did not destroy the statues. They did not render then unrecognizable. They made them incomplete and broken. The missing parts made sure no viewer would forget the statues were artifice, constructed.iv Through this theological lens, redaction works as a reminder of mystery and unknowability, which, in these tyrannical times, feels ethical and urgent. Redaction undermines the supposed certainty of the words and images we use, whether those words and images are used to generate memos authorizing torture or laws that put children in cages or images that construct the enemies we’re told to fear.

In The Body in Pain, Elaine Scarry claims works of art – a sentence, a cup, a piece of lace, a painting – as “fragments of world alteration,” and she insists these new creations show on a small scale what’s possible on a larger scale should we choose to work together: the total reinvention of the world.v Art like Bowen’s gives me hope, and this hope is not naïve. It is not romantic or small or abstract. It’s concrete: glue and paint, scissors and tape, words and drawings, book pages and puff paint. It’s the certain knowledge that it’s possible to make something new.

- Sarah Sentilles is the author, most recently, of Draw Your Weapons.