exhibition
The Influential Female: Drawings Inspired by Women in History 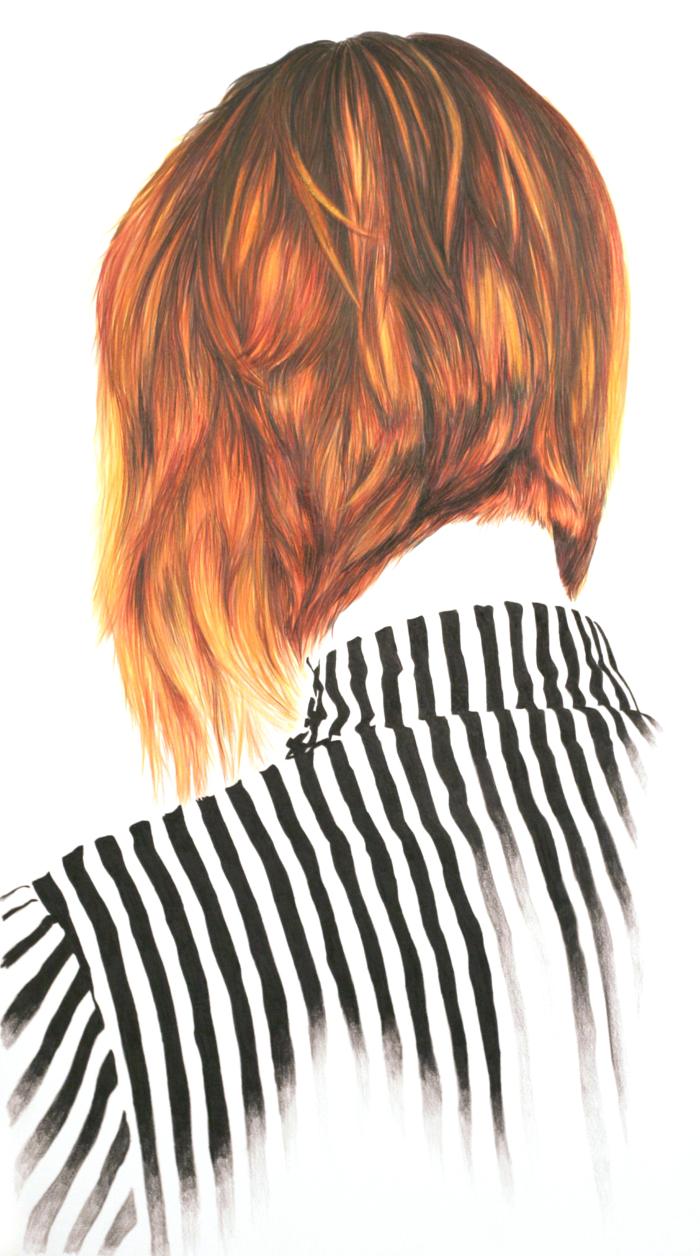 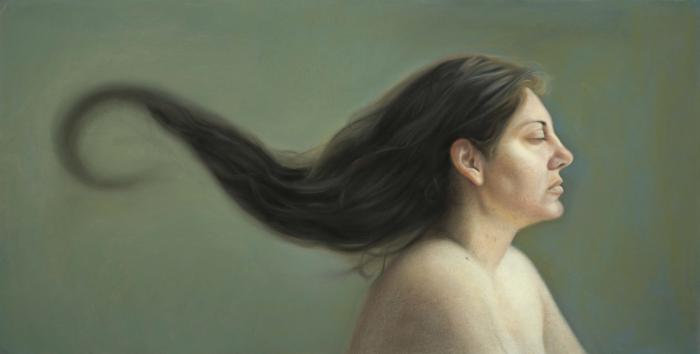 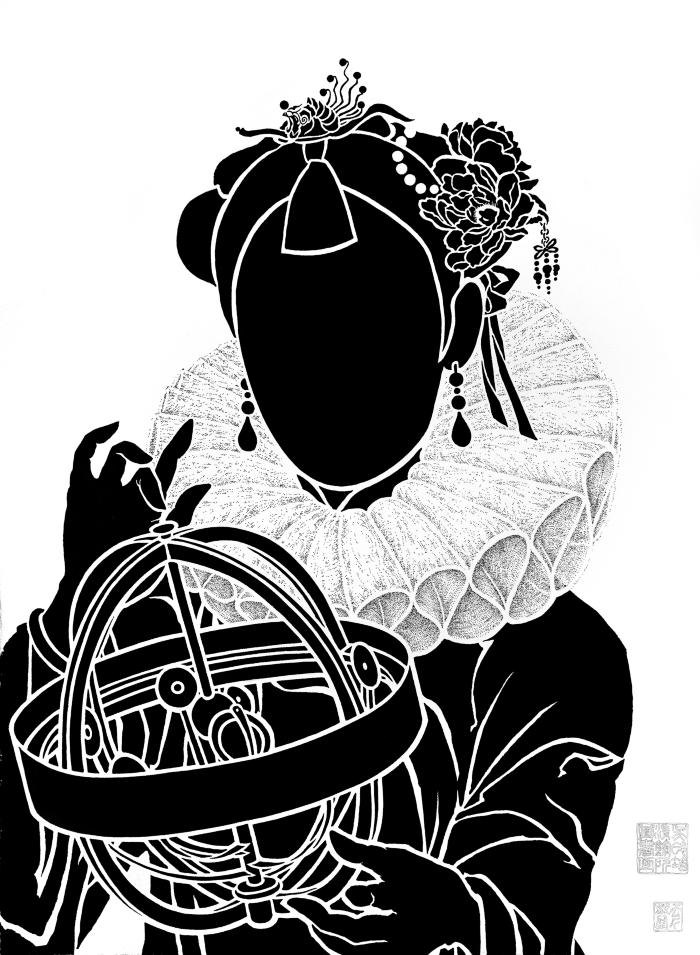 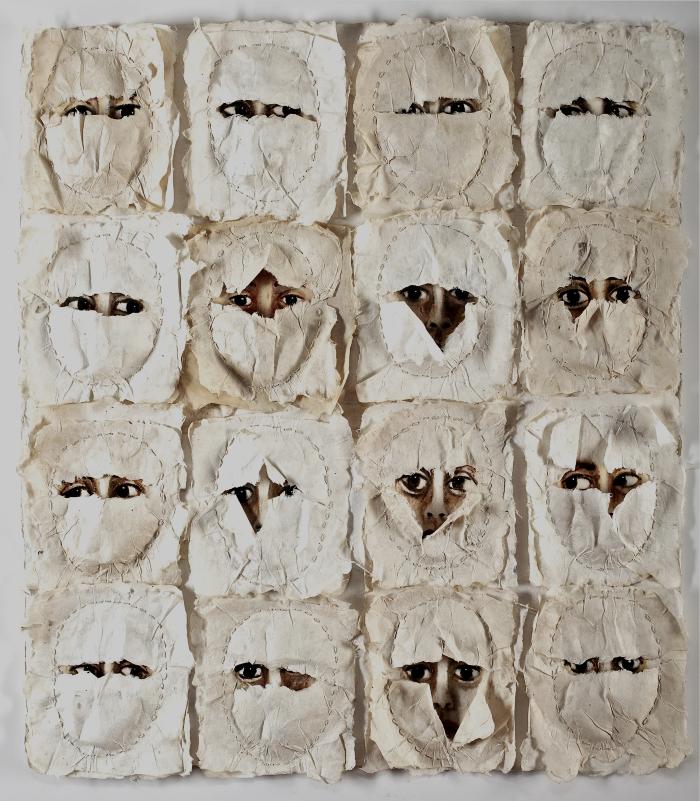 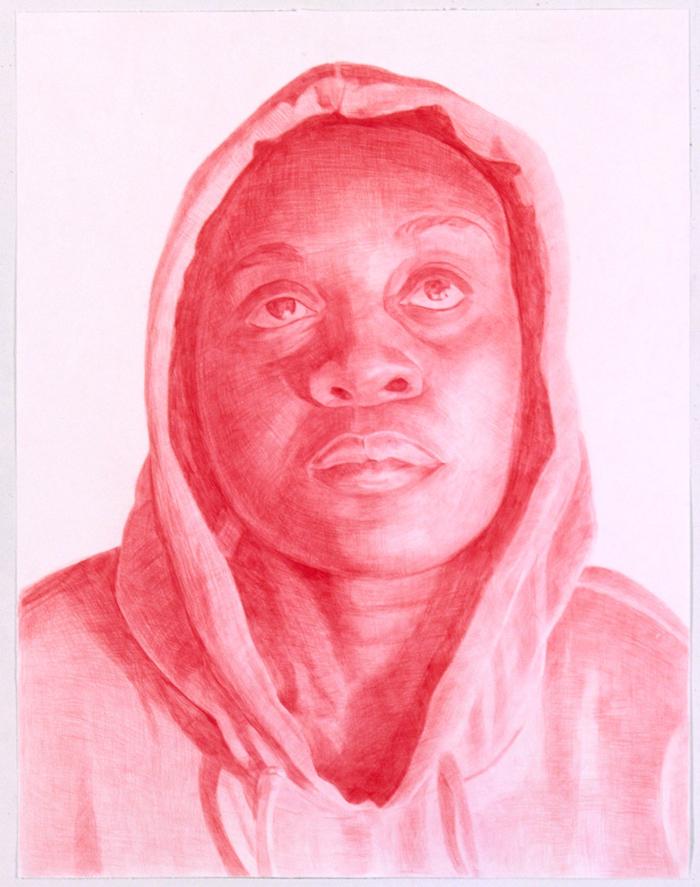 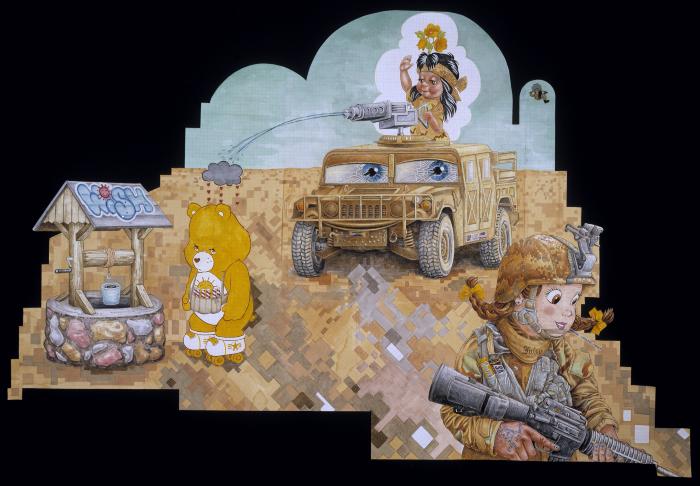 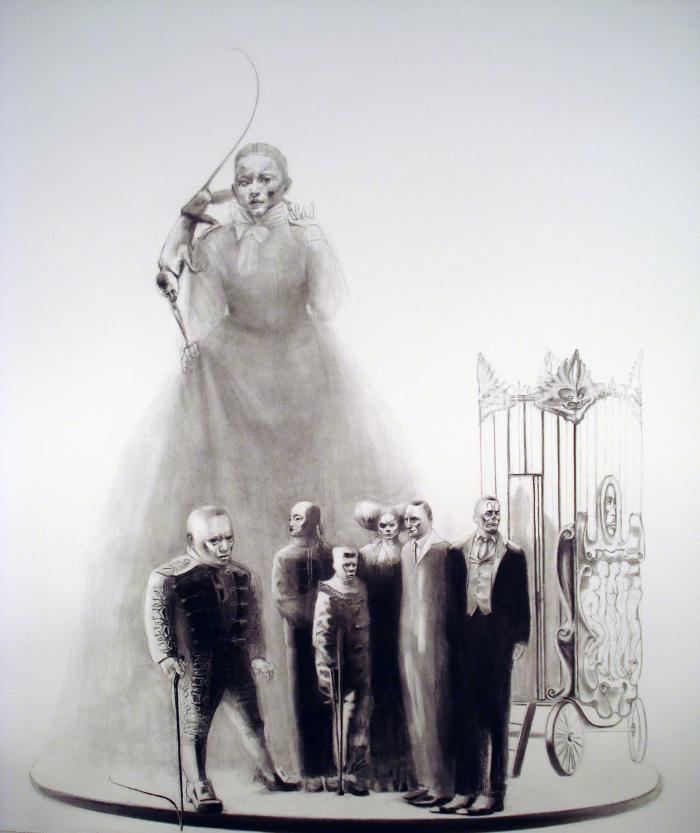 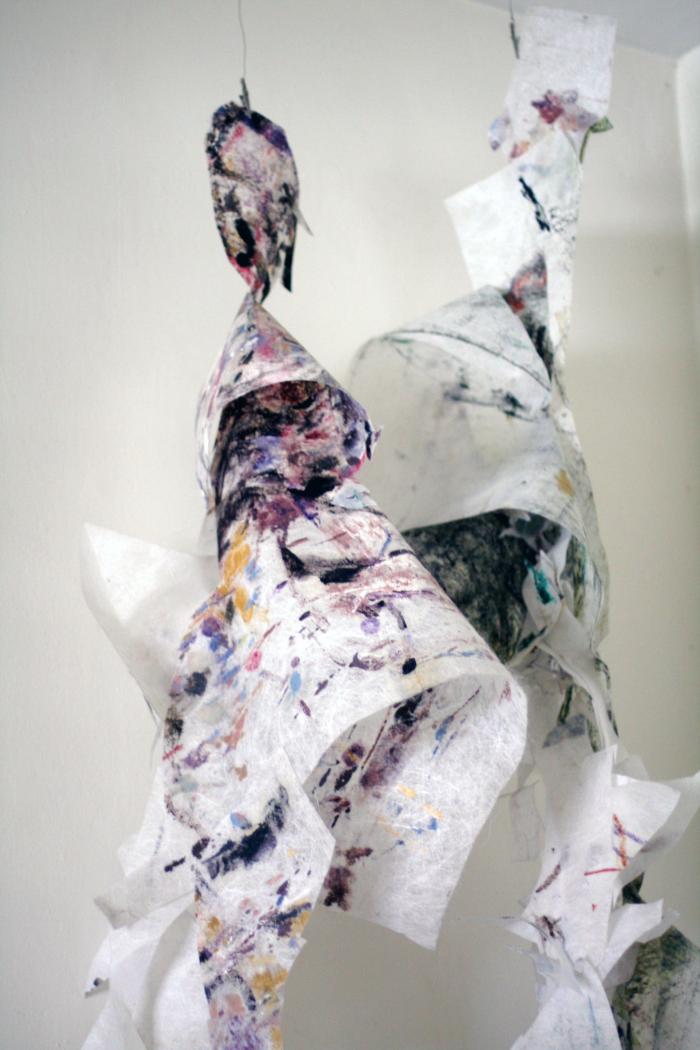 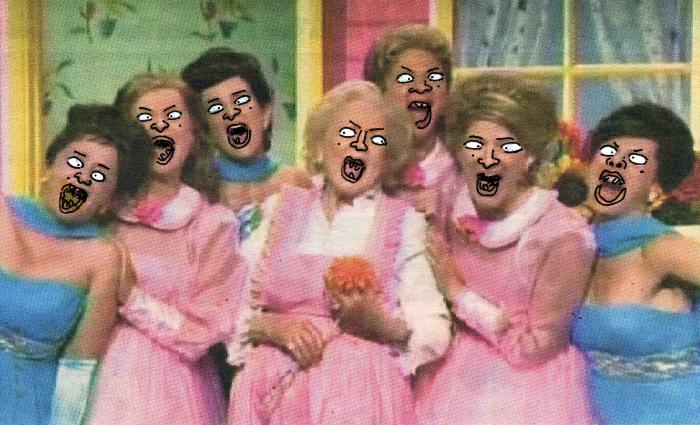 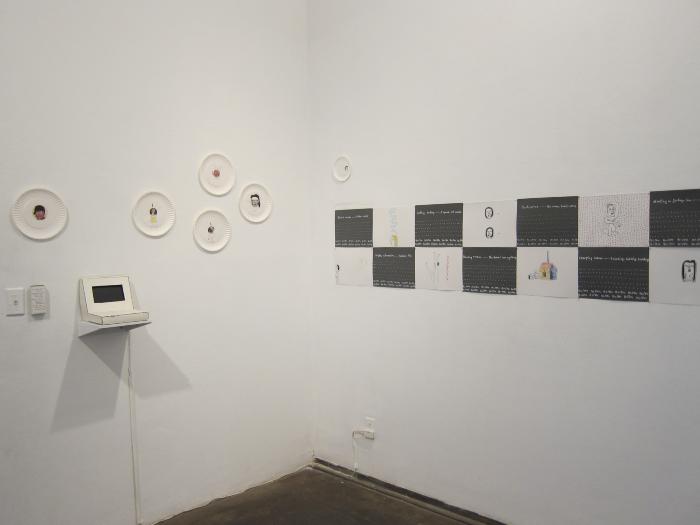 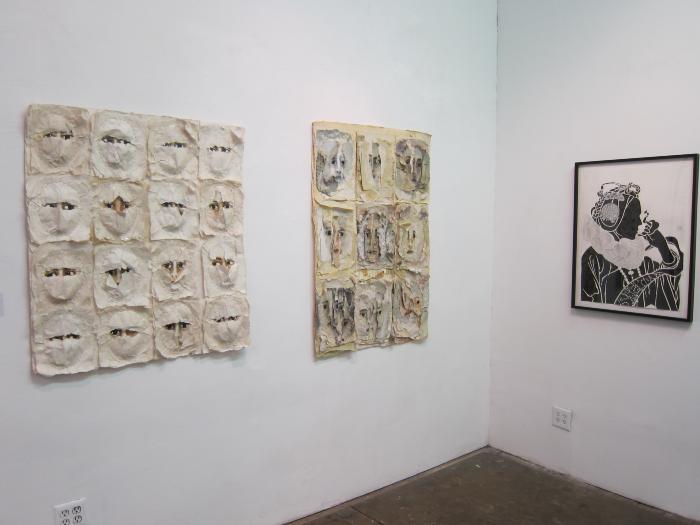 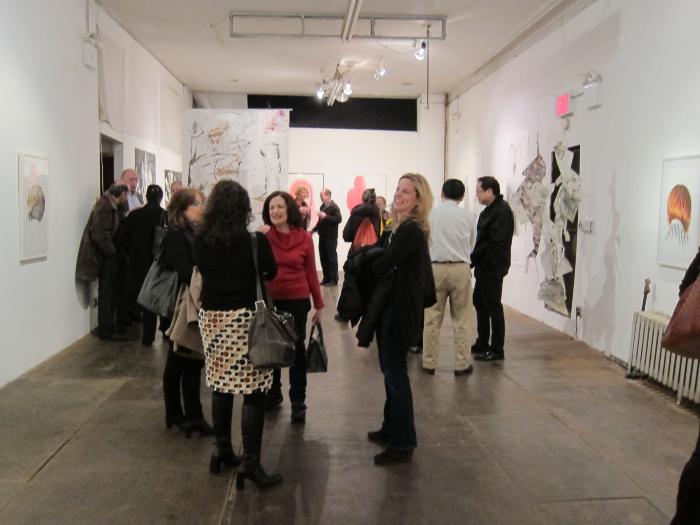 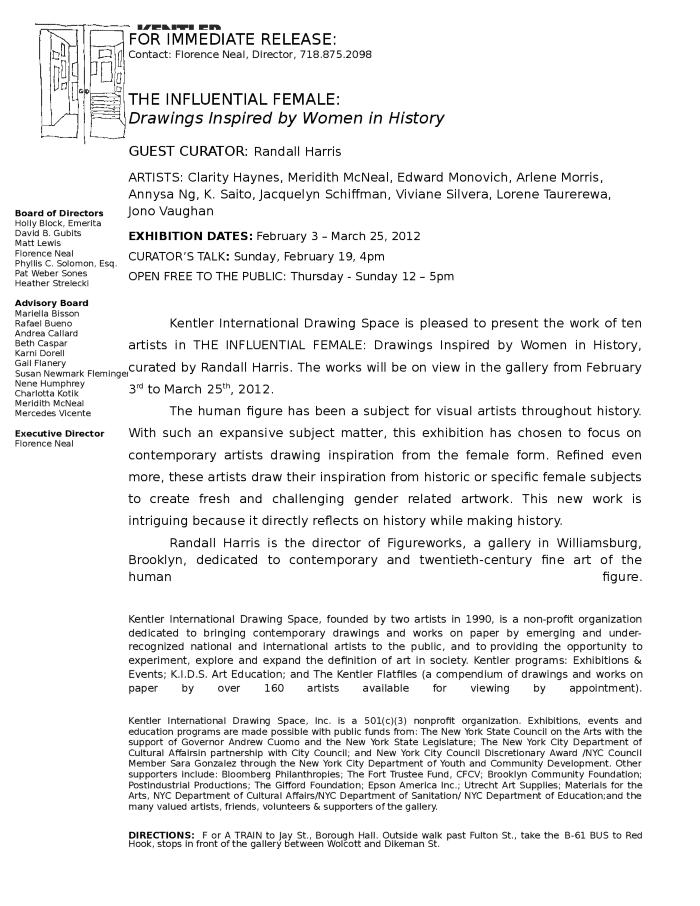 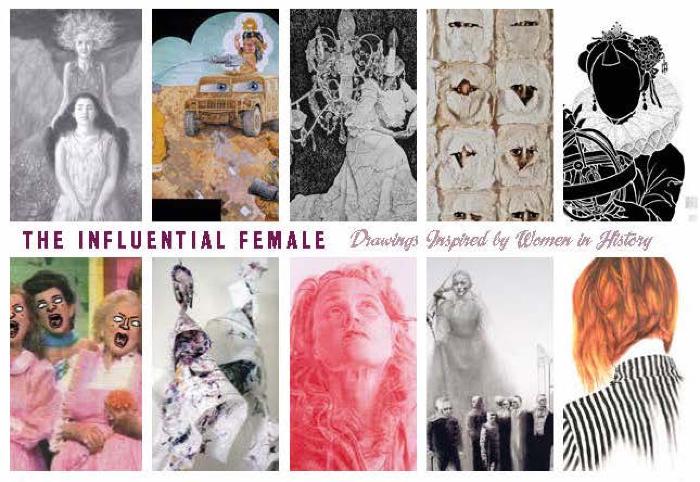 The human figure has been a primary subject for visual artists throughout history. With such an expansive subject matter, this exhibition has chosen to focus on contemporary artists who draw inspiration from the female form. Refining even more, these artists draw their inspiration from historic or specific female subjects to create fresh and challenging gender-related artwork.  This new work is intriguing because it directly reflects on history while making history.
Women’s hair has always played a very important role in culture and identity. It is directly associated with status, class and ethnicity. Hair is bought, sold and treasured. Various hairstyles have even caused great scandals and societal rejections. Jono Vaughan actively explores his feminine side by altering his own hair with beehives, updos and bobs and then documents these coiffures with exquisitely detailed pen-and-ink self-portraits.
Clarity Haynes works with soft drawing media on paper to create archetypal portraits of women. She is fascinated by the history of portraiture in painting and by the ways in which changing conventions reflect ideas about gender. In Healing and Her There From Here, long, flowing hair evokes a passage of time, which is then cut short in Kate!, where cropped hair and masculine attire introduce an alternative perception of women in history.
Perhaps more than hair, women’s attire has played a significant role in gender identity. Physiognomy, the assessment of a person’s character or personality from their outer appearance, has a long history in human cultures, and inferences include personality, character and even the destiny of the person. Annysa Ng’s ink drawings are specifically tied to identity and the history of Hong Kong. In her work, silhouetted images are devoid of emotion and identity, allowing the attire, which combines period European fashion with traditional Chinese costume, to illustrate a combination of cultures and mixed identities often found in that region.
In Arlene Morris’s Window and Untitled, shrouded faces with intense eyes may initially reference women of Muslim faith but the work originated from her Catholic upbringing, where nuns’ habits were equally masking. In this series, Arlene explores the cloaking of women in faith-based organizations by using small sheets of handmade kozo paper with mica that is then drawn or painted on, torn, molded and sewn to form the resulting portraits. Many of the panels are layered with text from a stream of consciousness that she penned over twenty-five years ago.  She also relates this mixed-media process of quilting, decorating and journalizing to the traditional roles women have been encouraged to pursue.
Viviane Silvera’s large-scale drawings are also inspired by historical devotional images. Everyday Saints are drawings that tap into the beauty of everyday people by capturing them in those moments in which they exhibit qualities of transcendence--thoughtfulness, reflection, pure emotion or contemplation. These women become iconic, and their clothing and features echo those of historical icons in unexpected ways. A young woman’s hooded sweatshirt, for example, reflects the hooded garb of a monk.

We live amid history and frequently either take it for granted or try to minimize its relevance  in the name of progress.  Meridith McNeal often begins a project or body of work by thinking about the history that unfolds around us every day. As we walk down the street we see a converted gas-lit streetlight from the turn of the century or note a vintage bracelet on a young woman’s wrist  We update our history every day, leaving remnants of our past barely visible. Meridith’s Signora della Casa series, rendered using an old-fashioned nib pen and ink, honors period attire set against a back drop of chandeliers to illuminate a generation of style and tranquillity.
Edward Monovich reinterprets idyllic scenes from popular stories, television and advertising using familiar childhood characters, such as Winnie the Pooh and Strawberry Shortcake. His characters, cloaked in branded attire, confront geopolitical realities where pastoral landscapes are tainted by the presence of hovering drones, landmines, poison ivy and litter. Edward’s collages are heavily loaded with imagery that confronts how corporate branding has infiltrated our society and created an artificial sense of progress.
Storyteller Lorene Taurerewa pulls from her own ancestral inheritance to create large-scale drawings using inviting yet macabre imagery derived from Aesop’s fables and Grimm’s fairy tales. A New Zealander of Chinese, Samoan and European descent, Lorene often uses a large central female figure from which her diverse storyline unfolds. Dreamlike characters referenced from various generations welcome with charm yet upon closer inspection remind that danger lurks around every corner.
Jacquelyn Schiffman uses a synthetic, spun-woven fabric base for her drawings, which is then cut up and reconstructed to form suspended sculptures. OHSHOWME was influenced directly by artist Greer Lankton and her poupees, which were created in the 1980s. This drawing reflects on Lankton’s female body as a result of sexual reassignment surgery.  THE READY ROSE AND THE LILLY FLOWER, expresses the relationship between Carpaccio's drawing of Ursula's Dream and his use of color in other works such as The Courtesans. These floating works appear delicate and ephemeral, yet this enduring fabric with empowered subject matter rebukes the passage of time.
K. Saito explores the history of words in his series entitled Foolish Drawings. He feels that because humans possess words, their desires are limitless. The drawings originate from time-honored life drawing sessions and newspaper clippings from our continuous fascination with celebrity. Many of these works are combined with catchwords to explore the human possession of language used to fulfill foolish desires. Others are used for short animated films to offer a humorous glimpse into the absurdity of repetition.
All of these visual artists continue to be inspired by history and the enduring lure of the female form in art. Each moves from specific origins toward their own personal influences and experiences to create vibrant and thought-provoking work. This individuality, derived from common bonds, ensures our history and welcomes our future.


Randall Harris is the director of Figureworks, a gallery in Williamsburg, Brooklyn, dedicated to contemporary and twentieth-century fine art of the human figure. He has curated over sixty exhibitions.