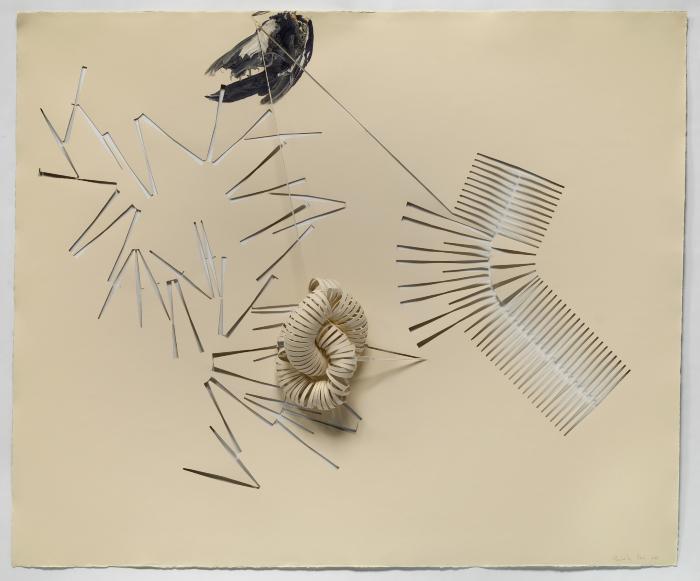 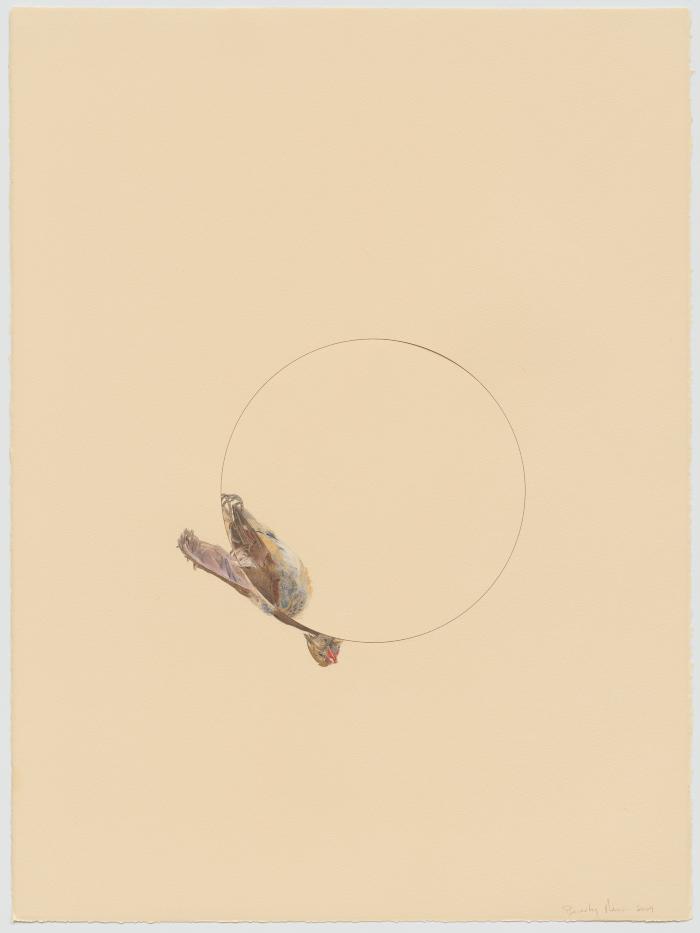 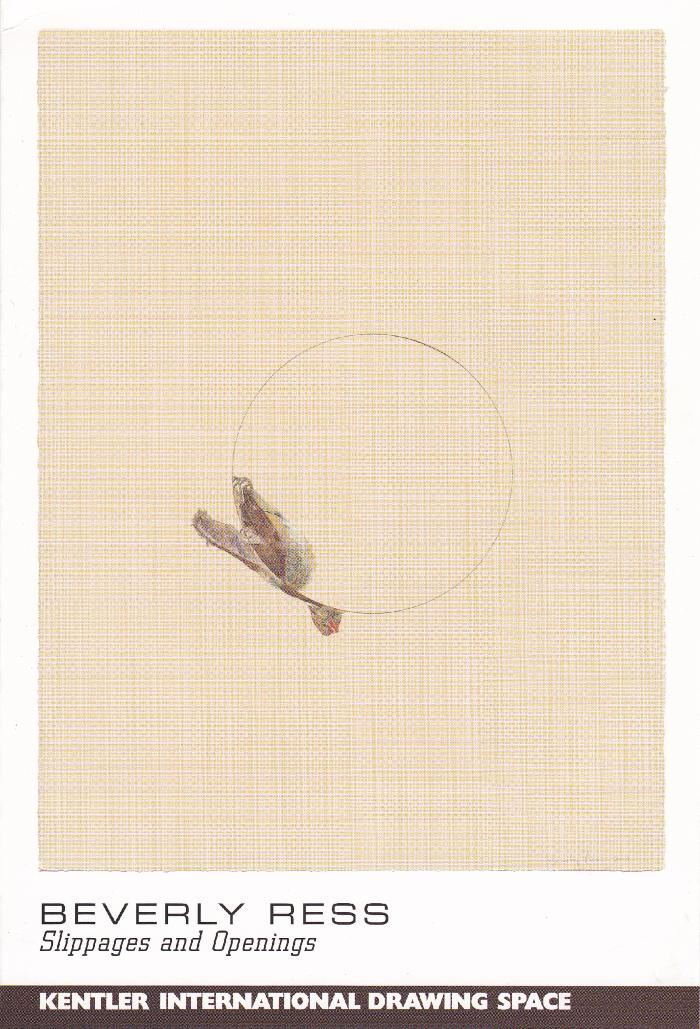 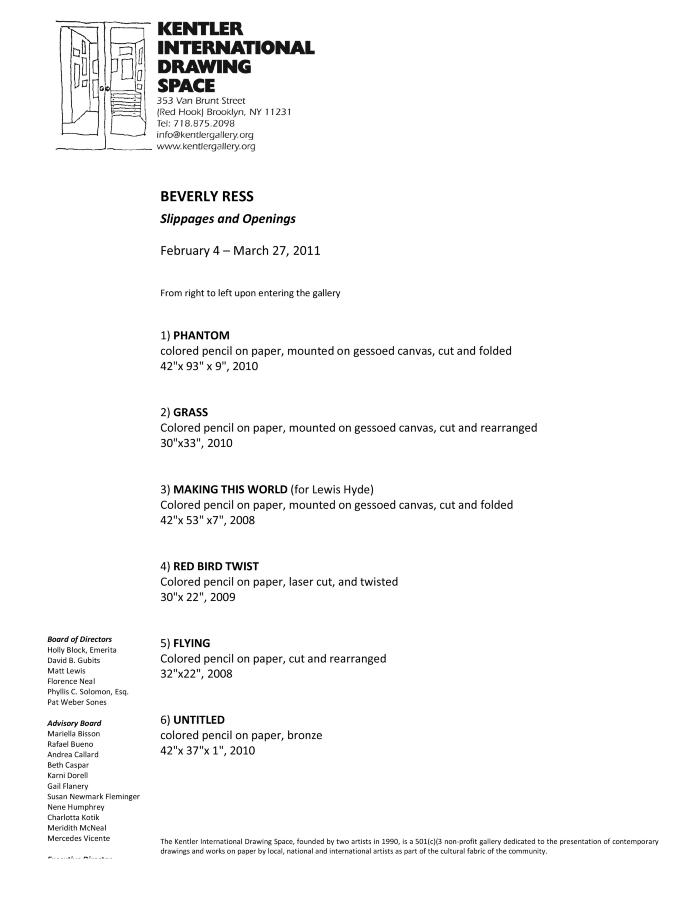 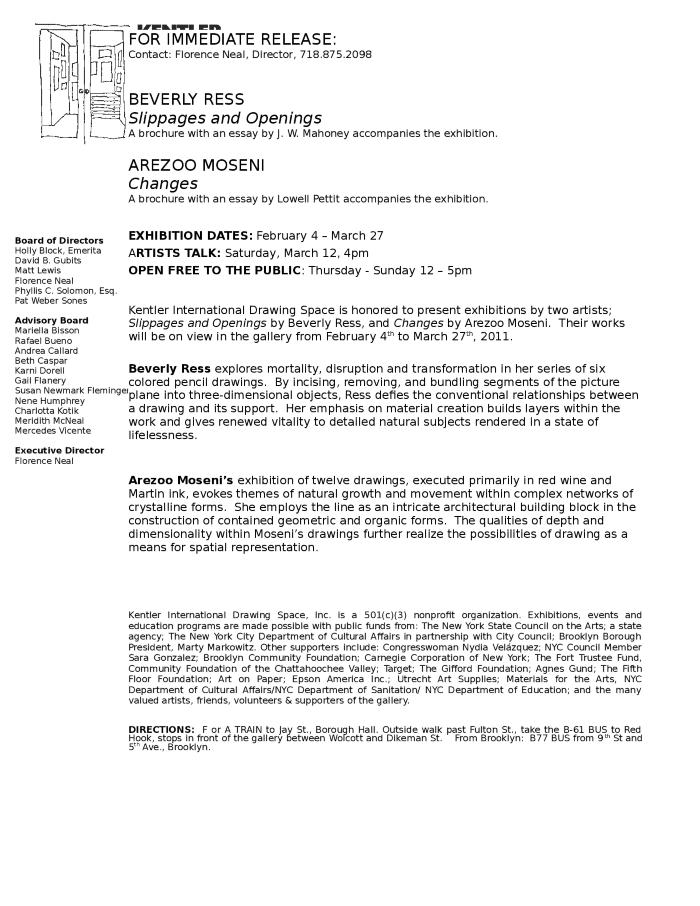 "In chaotic systems...even the tiniest changes in the initial condition--beyond anything we could even dream of measuring--can have an enormous influence on the dynamics of the system after a very short period of time. " - Bernd Krauskopf (Cabinet magazine, Winter 2009) "Very great and wonderful things are done by means of a mechanism of extreme simplicity.... Music itself is made of simple things--a reed, a pipe, a string. The great cosmic mechanisms are stupendous in their simplicity…” - D'Arcy Thompson (On Growth and Form, | To describe her works most directly, Beverly Ress makes colored-pencil drawings of natural objects on paper mounted on canvas, the surface of which is then interrupted, by laser or blade, so that the conventional two dimensions of each drawing are perforated or incised, and transformed into three-dimensional objects, separated elements and voids. These kinds of "changes in the initial condition," in Bernd Krauskopf's words, exemplify a very real change unfolding throughout the fabric of contemporary art. | Modernism's thesis, a progressive faith in the new, countered by postmodernism's critically subversive analysis of modern art's capitalized reception, has been moving into a richly uncertain synthesis, a transmodernity, vitalized by the infinity of images, attitudes, realizations and ideas we connect to these days, and focusing toward a hopefully welcoming unknown. This is a time of deep aesthetic transition, and Beverly Ress is clearly an artist riding, somehow, on this wave. | In 1503, the German artist Albrecht Dürer painted a watercolor of a group of plants, entitled Das Grosse Rasenstuckas (The Large Turf). It was a remarkably unremarkable picture of a group of common marshy weeds--varying leaf forms, a few seed stalks, several dandelion blossoms gone to petal-less heads--arranged not as a still life but as real life--chaotic, incidental and haphazard. As a work of art, this represented a staggeringly new vision of what art could speak about: sheer, uninflected, unsymbolic reality. | This apparently simple watercolor constituted the breaking of a fabric, the membrane separating the Western practice of art making as an ennobling of religious, mythical or political narratives and figures, from the possibility of art's addressing the much wider, wilder visual world surrounding us all. Beverly Ress's own work offers another set of such openings, with commensurately wide implications. | In her current work, beginning as a realistically depicted image, expressed on a two-dimensional surface, a transformation unfolds: a set of abstractions interpenetrates the conventional two-dimensional order, so that the "window" of Western perspective is fundamentally interrupted, by expressions below the image as voids, and above it as abstractions. A multidimensional vision of the real world? So may it actually be. That's what's so potently challenging in this work, Beverly Ress's vision of such possibilities, both allegorically and realistically expressed. | Phantom, her most recent piece, depicts a tree branch, mottled with spots of lichen, as the base from which excisions, both from within the branch and into the open space of the paper, have been made. These excisions feel both arbitrary and ordered--a series of rectangular excisions emerge out of the horizontal form of the branch, suggesting a mysteriously intentional order to this cutting away and lifting. And these abstractions are engaged by another set of cutaway abstractions, a series of flowing lines diverging from a central nexus, that resembles the lucidly symmetric forms of jellyfish. | But as these excisions are bundled together, as a three-dimensional unit, physically outside the drawing's conventional surface, these strips of paper are reorganized into a curved, womblike form, which the artist says relates to a Lorenz Manifold, a term in chaos theory for a surface with two sides woven into a complex expression of the properties and geometry of such an ambiguous surface, like the folds of a robe. | Beverly Ress is presenting a philosophical exercise--a visual drama, regarding a natural object as an abstract, comprehensively, consciously formed circumstance, in time, depicted as a definitive form. But then the drawing is cut and folded outside its linear fabric, into a possible multiplicity of significant forms--and dimensions of being. | Grass is a drawing of two long strands of dried grass, one remaining on the drawing surface, the other cut away from it into an independent, three-dimensional flow, liberated from being simply a two-dimensional representation. | Red Bird Twist, a drawing of the dried body of a female cardinal, has also been excised, in the form of a circle at the drawing's center, but the excised circle is only shifted, not removed, so that a Platonic form, the circle, is used to create an abstraction from a natural form. | The Indian teacher Meher Baba once said, "That which is real is given and received in silence." The living things in Beverly Ress's works are no longer alive, so what we see is what a life force has made, not how or where it may still exist. We see life simply in its vacated forms. Metaphorically, may we imagine she's suggesting that a higher dimensional order may transcend, in its actions, these empty husks? Her art can only imagine it, but it seems to do so, elegantly. | Five hundred years apart, both Beverly Ress and Albrecht Dürer demonstrate an undeviating respect for the accurate registering of visual data, as it is directly perceived. For Dürer, his revolution was simply that accuracy applied to real nature, beyond myth. For Beverly Ress, what is new – and “transmodern” – is her vision of how mutable, how subject to radical shifts our perception of the real may be – perhaps as mutable as the fabric of reality itself? - J. W. Mahoney is an artist, writer, and independent curator who serves as Washington’s Corresponding Editor for Art in America, He is currently an Affiliate Professor of Visual Arts at the University of Maryland, Baltimore County. (front gallery space)