Ilene Sunshine, Out of Line 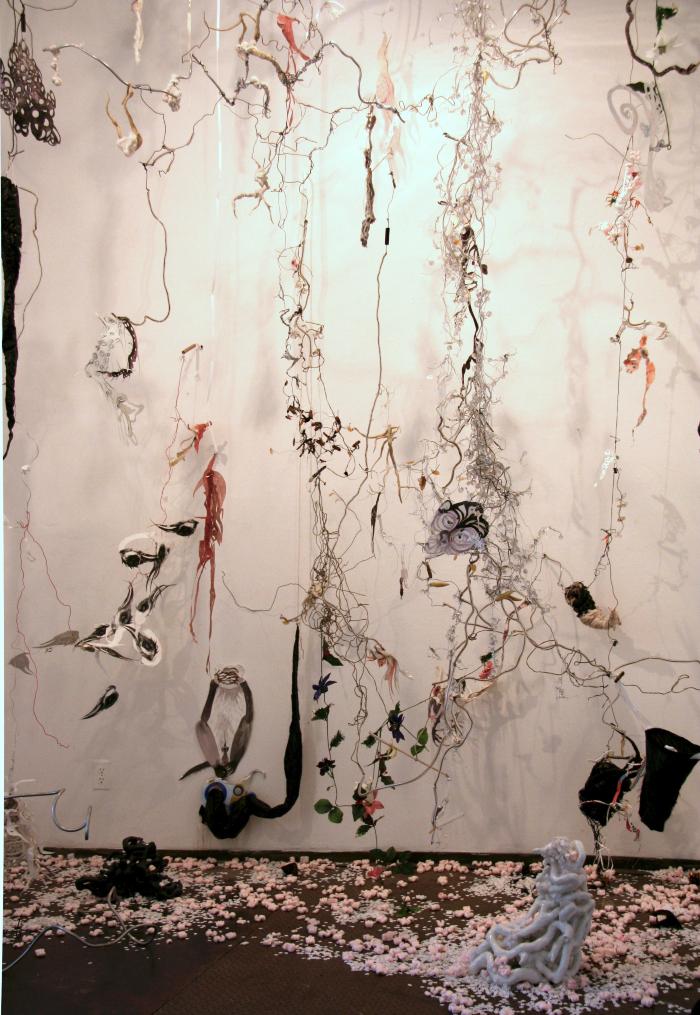 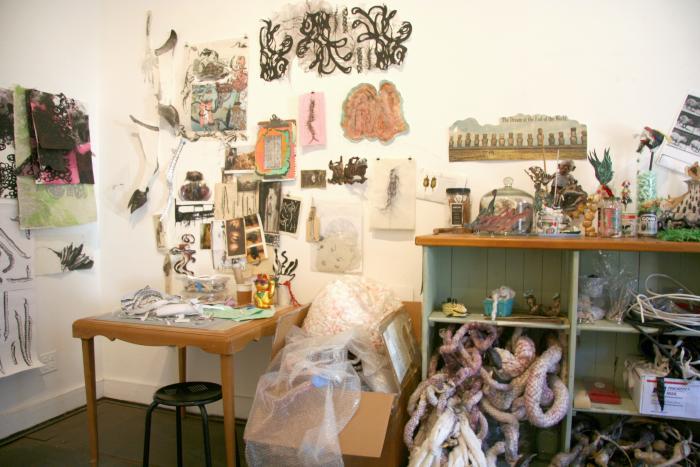 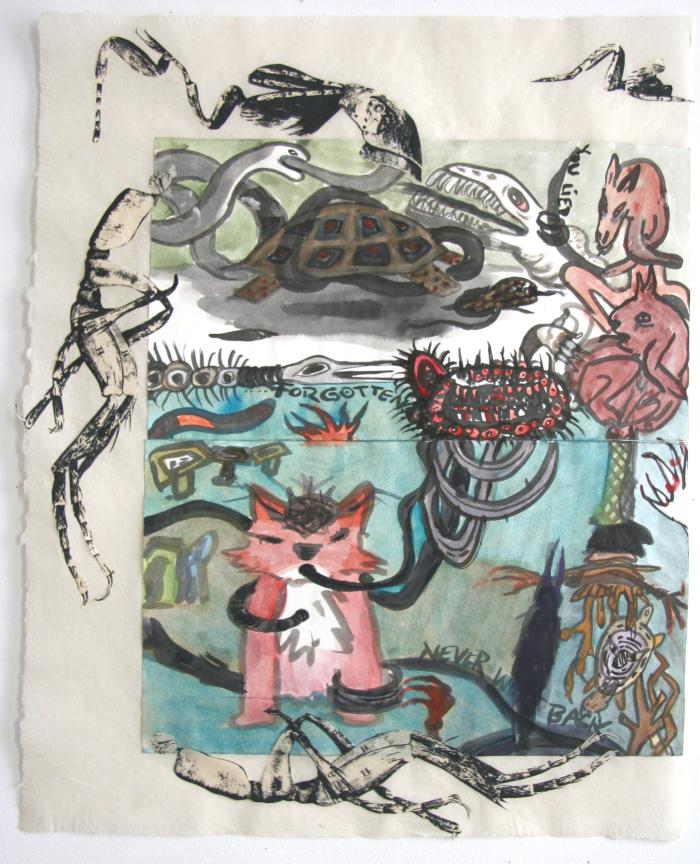 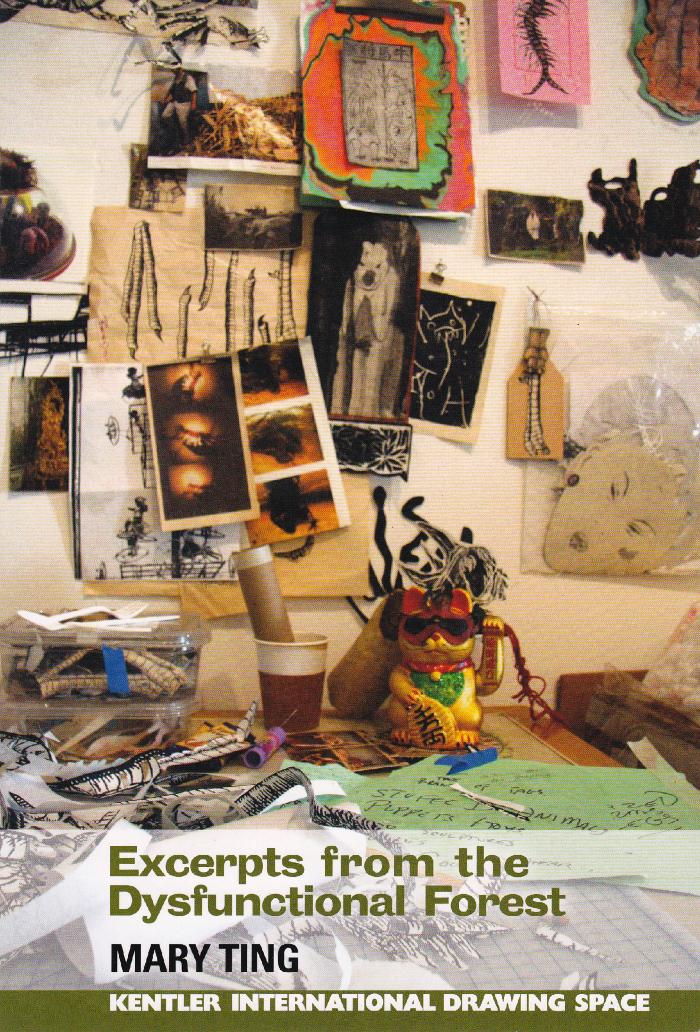 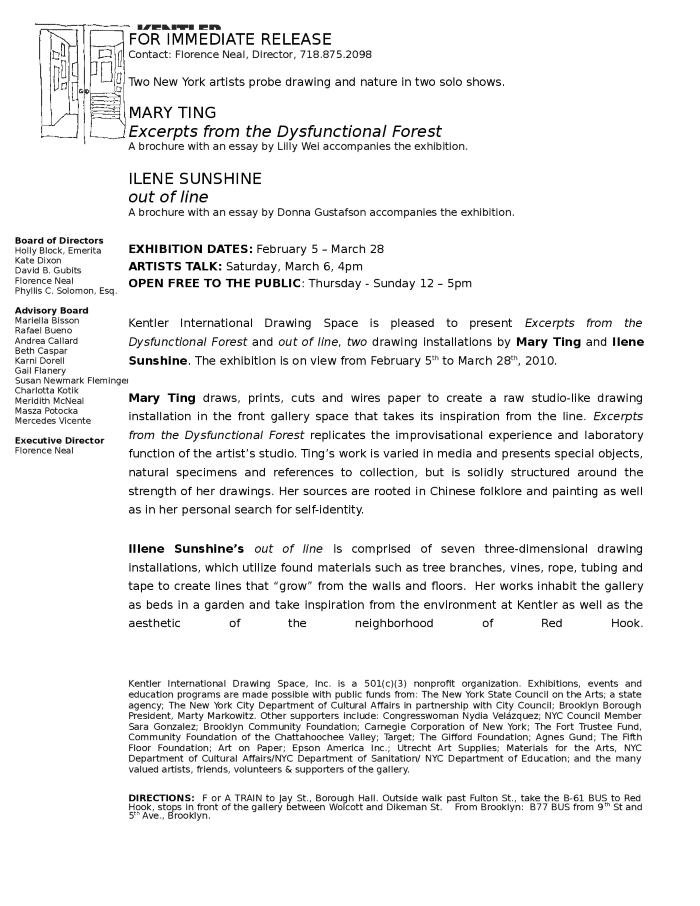 Delicacy—a condition as much as a description—is the leitmotif of Mary Ting’s art, threaded throughout the components of her edgy, immersive and at times chaotic, unwieldy installations. Her work’s lightness of being is conveyed by a corresponding lightness of materials—cut paper, soot, wire, silkscreen, watercolors, pipe cleaners, cotton, roots, plastic beads, foil, plaster, insects, for starters--the whole an ensemble with the ephemerality of a dream. Lest it become too airy, too whimsical, Ting anchors her production by the strength of her drawing, always the most important structuring element in her work, regardless of materials. “Drawing,” she says, “is a way of thinking for me.” Other ballast includes bold color accents and the provocation of her themes in such exhibitions as the recent Witch, Whore, Widow, a study of female identity and misbegotten stereotypes, of women seen as twisted, dark, destructive forces, her version of the three faces of Eve. Dysfunctional Forest, her latest venture, is no exception to this general rule, although in this installation Ting wants to replicate the experience of the studio and its greater informality, its improvisations, its chance arrangements and spontaneous epiphanies, underscoring its function as a laboratory and focusing on process, flux and the ongoing nature of creative invention. In her notes she says she wants Dysfunctional Forest to be more three-dimensional, “to keep it off the wall,” and likens the totality to a Wunderkammer, a cabinet of personal curiosities consisting of significant, even talismanic objects, drawings and natural specimens, a reference to art making, collecting and collections.

Ting works in a variety of media that appears in her installations but is also presented independently: video, photography, works on paper, artist’s books and performances. Her impulse is both abstract and representational, her wiry, animated calligraphic line, her drawings on paper and in space spinning into parts of the body—faces, hands, feet, arms—and fragments of flora and fauna, of monkeys and lotus pods, say. She burns paper, stains, smokes and rips it apart, acts of execution that symbolize acts of purification and propitiation. Her sources are deeply rooted in Chinese folklore and painting as well as autobiography as she searches for personal identity as an artist, woman and person of Chinese-American descent. Ting also refers to colonialism, diaspora and the collision of cultures, establishing a dialectic between civilization and its discontents and how that impacts the natural world. She is intrigued by the idea of hybrid identities and cultures, of collective and subjective memory and rituals. With its complexities and contradictions, Ting says her “work bears the residual weight” of all her “ghosts.”

Dysfunctional Forest—the title sets the tone for a less than celebratory view of the human condition—is a “jungle gone awry,” a metaphor for the failure of ecosystems reflecting the disarray of social and personal systems as the artist envisions it in this arresting, abundant, “oozing” (Florence Neal, Kentler’s director, called it), mixed-media environment in the tradition of assemblage and the Gesamtkunstwerk. By insisting on the theatrical and the artificial, on the concept of a working space—but also sorceress’s chamber, with the objects functioning as both props and fetishes—her most ambitious installation to date is offered as a revelation of what occurs behind the scenes, as a dismantling of the fictive, which nonetheless retains it own kind of magic, its immense imaginative authority, its essential ambiguities and its poetic license.