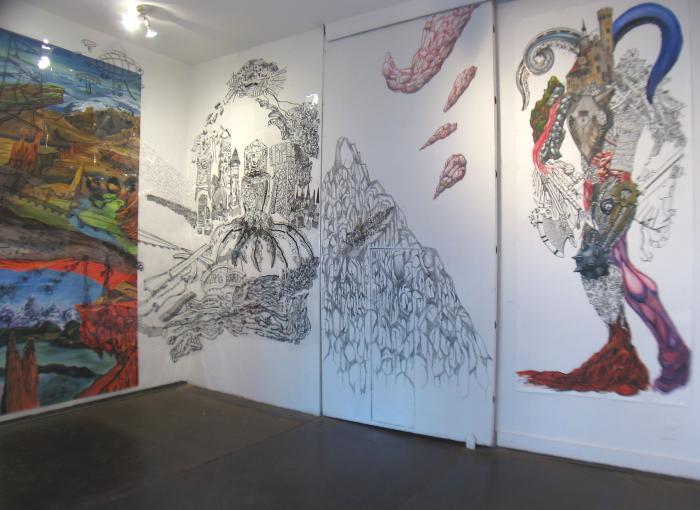 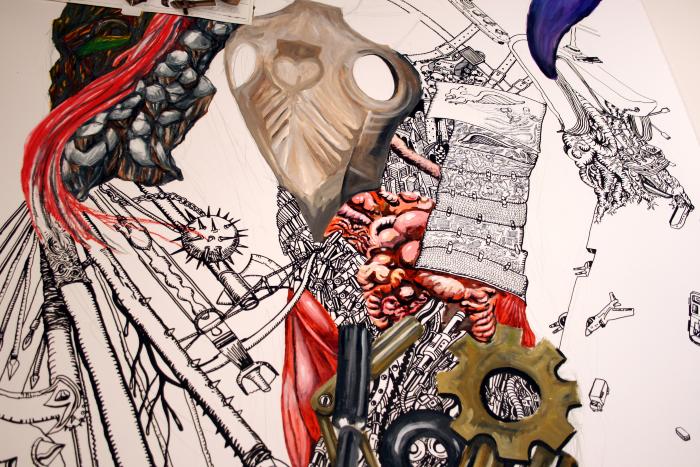 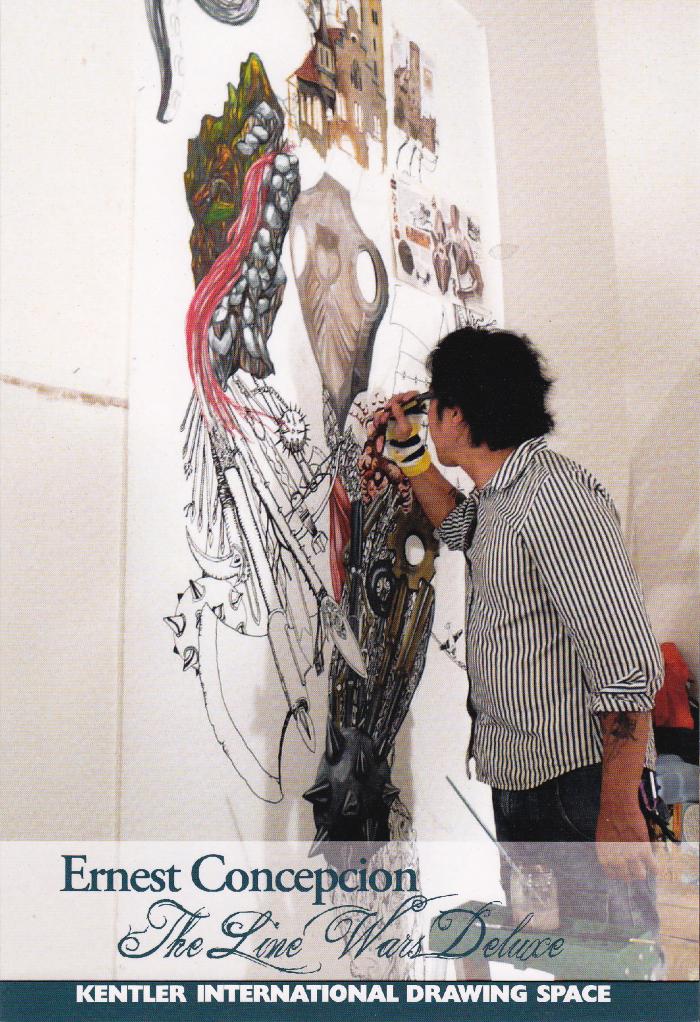 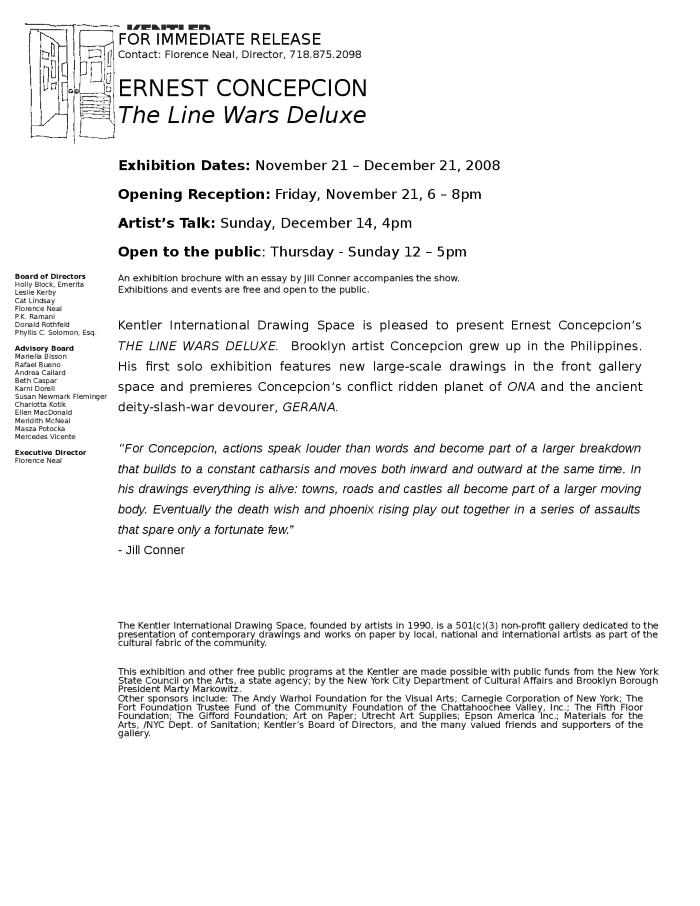 During the late nineteenth century, Honoré Daumier vaulted caricature and the political cartoon into cultural icons of the modern world, and eventually they were viewed as an essential mode of creative communication, although not widely accepted within the scope of fine art. In America, cartoons formed the bedrock of urban street culture, first appearing in the nineteenth century among the largely illiterate, lower-class working families who settled in cities like Chicago and New York. Images transcended the need for literacy since they spoke through comical exaggerations that reflected the random, everyday struggles shared by many. By the 1950s, however, caricature and comics had become icons for social discord and were blamed for the rise of teenage delinquency. Jack Kirby was suddenly the good guy, creating safe comics for young readers, while the underground comic scene flourished prominently along the West Coast. Ernest Concepcion makes a leap of faith in this solo show of new work and successfully merges the practice of fine art with popular comic culture constructed as a larger, albeit realistic, environment. / Using the obsessive act of caricature, he takes our minds back to where the wild things are and uncovers the effects of a larger twentieth-century, postwar existence that consists of otherwise subtle, unconscious reactions to the events experienced in our daily lives. This venture began in 2004, when the artist created a series of over a hundred drawings titled The Line Wars. Mounted on 9- by 12-inch panels, the work depicted a battle between multiple sides: chairs flying at each other, monsterlike eggs trying to smother a massive army of Saint Benedicts, or pasta fighting against quick-sands of rice. The Line Wars Deluxe dwarfs the viewer and expands the dimensions of those earlier drawings by extending the caricatures of Concepcion’s new work throughout the tall, narrow gallery of the Kentler International Drawing Space. It stretches high, from floor-to-ceiling, and across a variety of surfaces and backgrounds--empty painted landscapes, clear acetate, even a tall humanoid. / He returns each of us to a point in time when we dared to peek outside of our sheltered lives to find a scary, menacing world. Action, tension, conflict, ka-pow!! – those quick, exclamatory moments, which are unable to be linearly retold in words, appear throughout the artist’s visually dense drawings and vibrant paintings. The work, moreover, reflects both a pun and an appraisal of art history through a revamped process. / As in the 48- by 60-inch Ode to Odin (2006) and the long, narrow Life in a Hidden Valley (Go Anus!) (2007), Concepcion begins by depicting colorful idyllic landscapes, using either acrylic or oil paint, that look out far and wide into a new world. After a period of one to three months, the artist returns to these empty landscapes and aggressively tags each surface with Sharpie pens. Miniscule figures fight against outer-space hybrids, trapped in a series of never-ending, horrific battles. While painting turns into graffiti, the artist’s use of landscape as an overall context serves as a framework for his long-running inner narrative, which is populated with science-fiction beasts and war. / Concepcion’s elaborately patterned drawings strongly counter the assumption that anything could ever be perfect. While each caricature moves into a larger cartoon that exaggerates, gesticulates and glides into something else, it is always made clear that life is hardly ever fair. He breaks away from the imposed linearity of modern comics and instead overlaps different scenes in order to suggest that his caricatures share the same space as the viewer. Unlike the landscapes, there is almost no context beyond the various forms that struggle against others. However they do frame a larger personal narrative that during his childhood Concepcion acted out frequently within the confines of his family’s bathroom. At that time water meant war for an army of small action figures. The artist provided the sound effects as a looming backdrop. / For Concepcion, actions speak louder than words and become part of a larger breakdown that builds to a constant catharsis and moves both inward and outward at the same time. In his drawings everything is alive: towns, roads and castles all become part of a larger moving body. Eventually the death wish and phoenix rising play out together in a series of assaults that spare only a fortunate few. / Both cartoonists and caricaturists have long been viewed as hacks of high-brow culture. Historically, vernacular drawings that reflected traces of strong opinions were considered an extension of both the untrained artist’s hand and low aesthetics. Concepcion, however, transforms the vernacular line from an a historical moment into a longer continuum. In The Line Wars Deluxe, muscles can be seen pumping the history of traditional European artists like Hieronymus Bosch while rendering a mutiny of forms that pulse together, heaped in either defeat or victory. In his work, Concepcion pits the individual against himself, an “us versus them” scenario, where frenzied motion and jittery movement depict both artistic and visual spontaneity as well as uncertainty. - Jill Conner, Jill Conner is the New York Contributing Editor to Contemporary magazine.