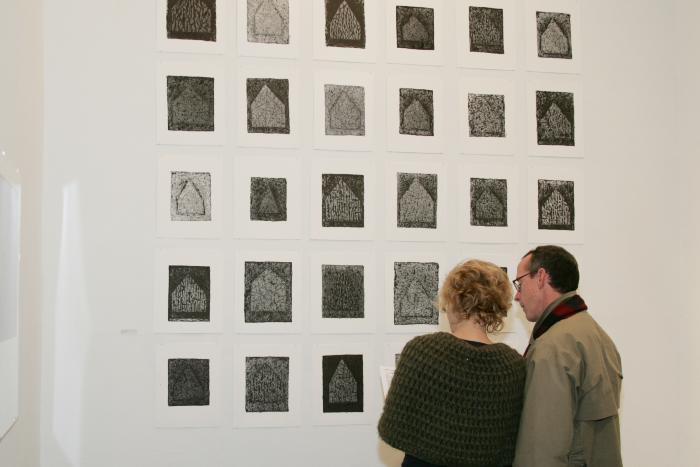 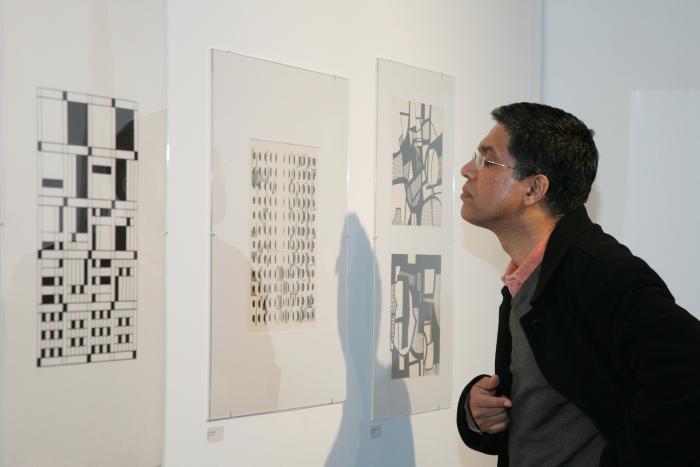 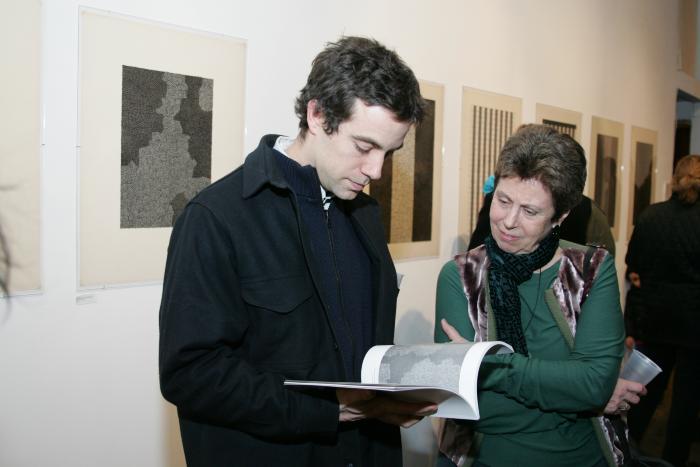 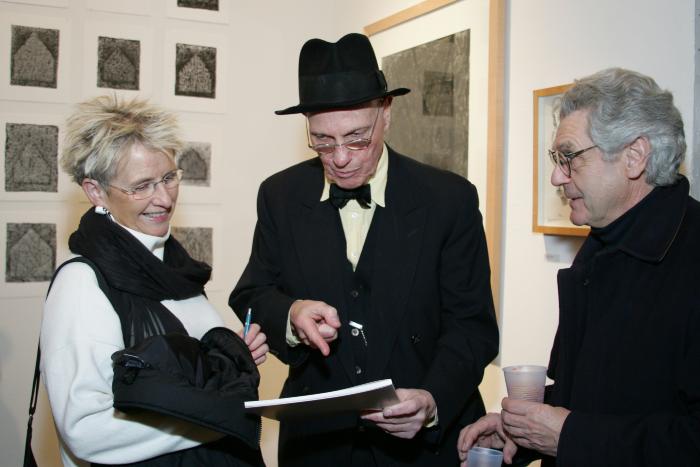 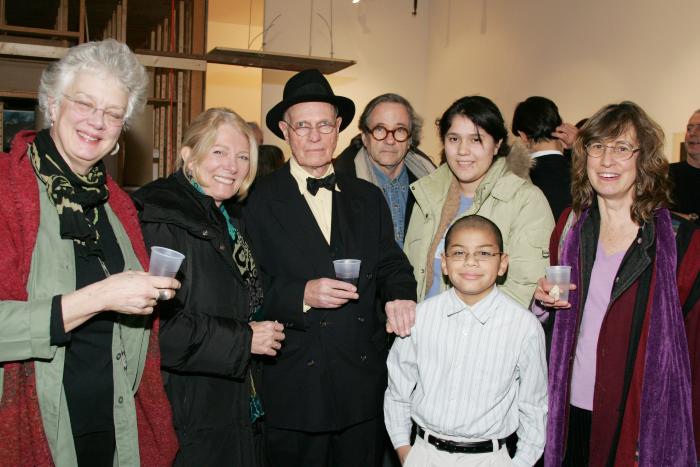 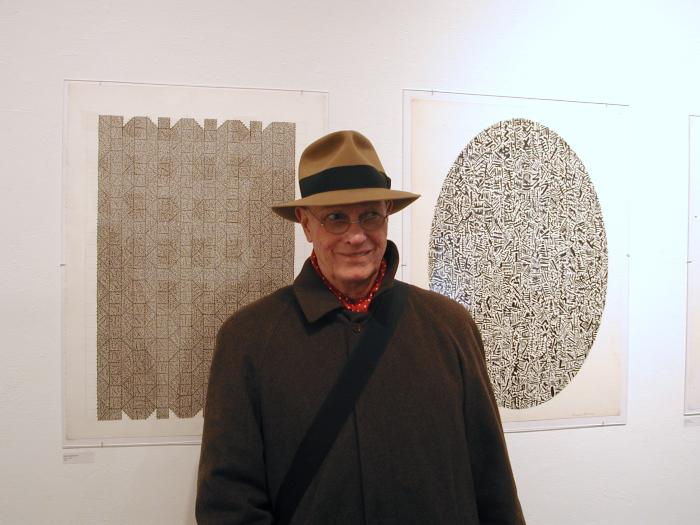 The artist with his work 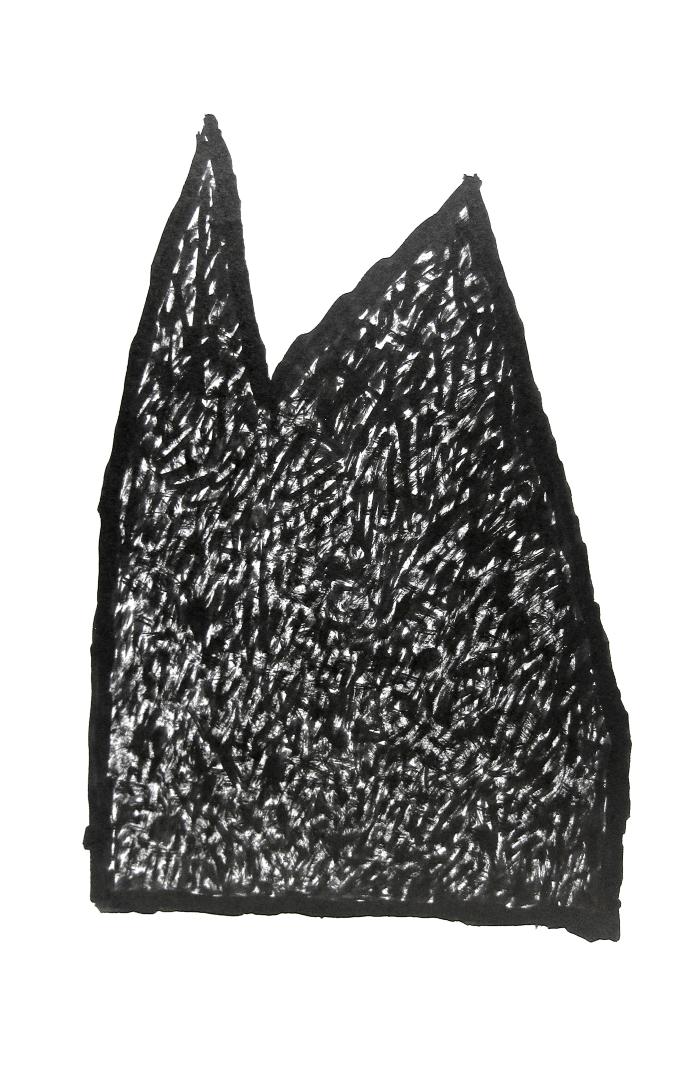 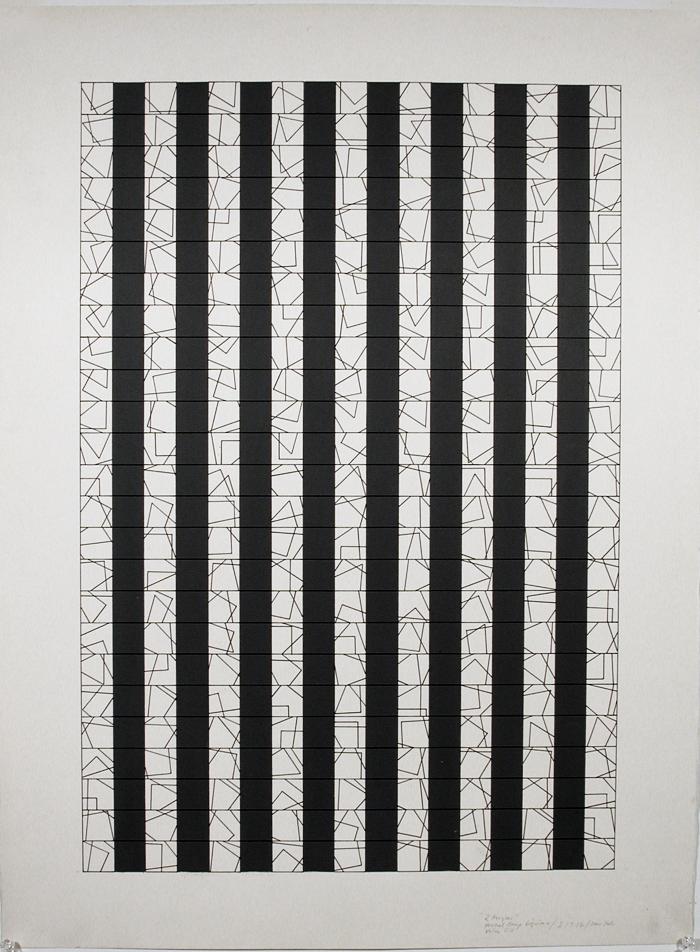 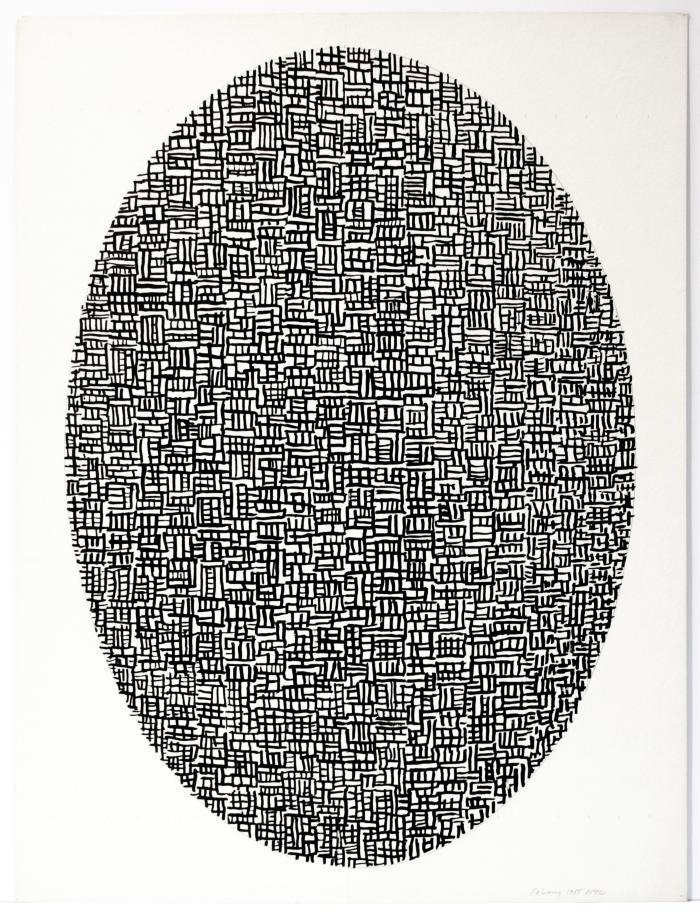 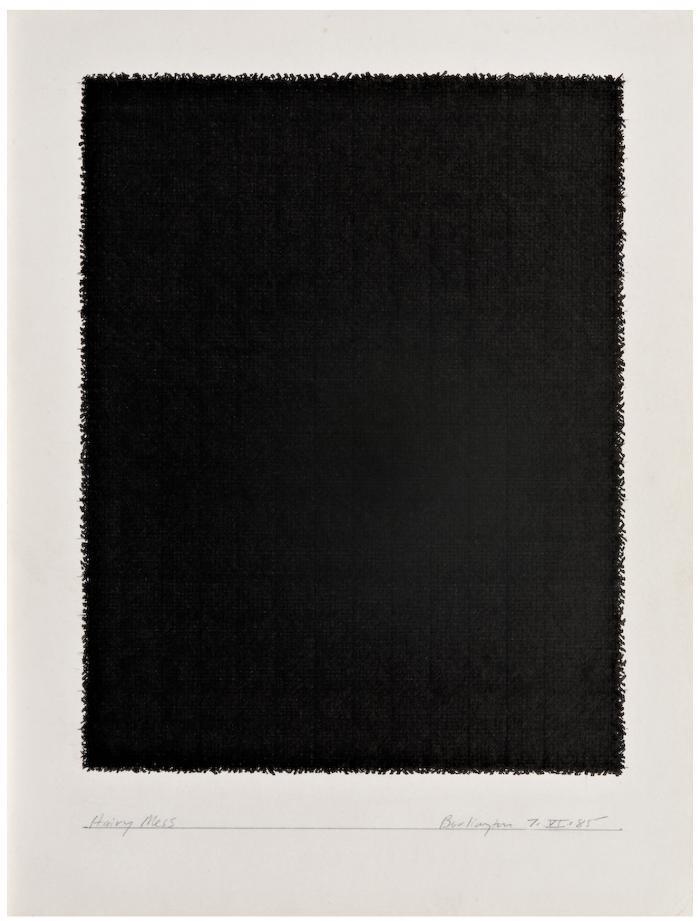 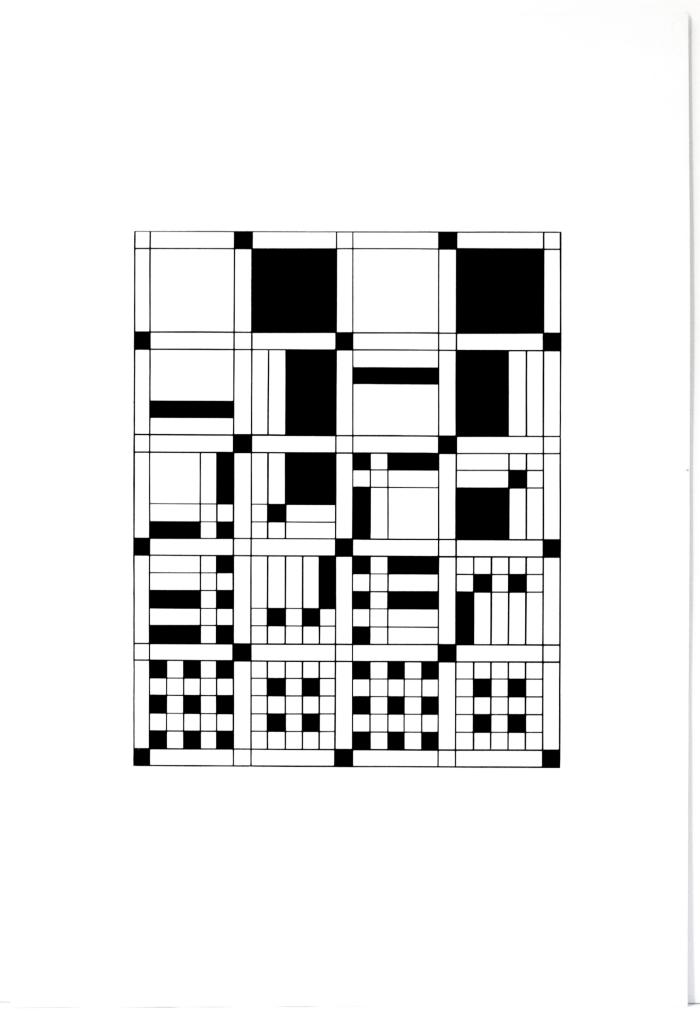 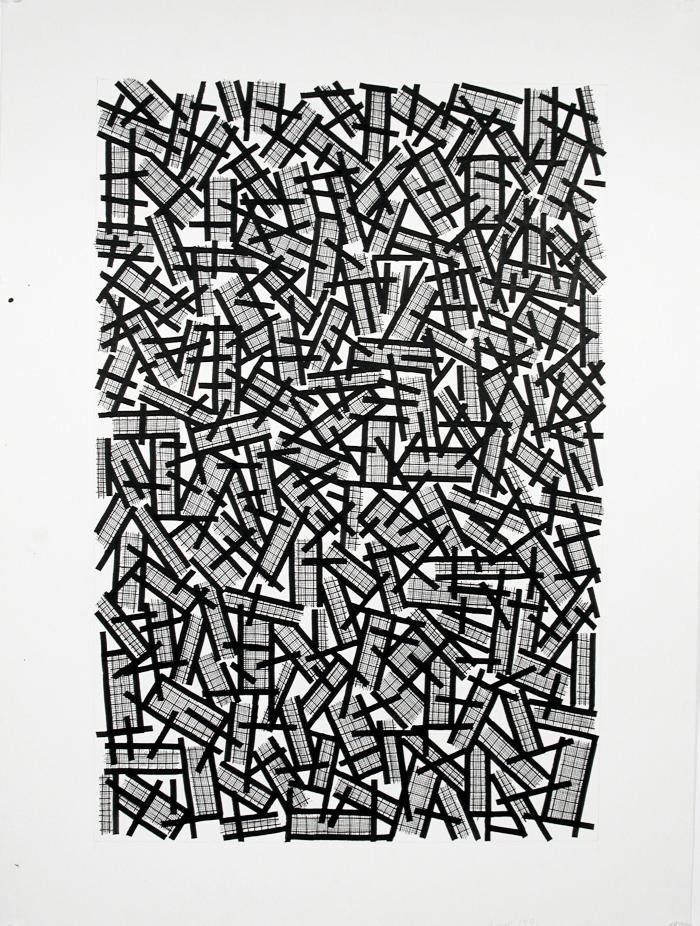 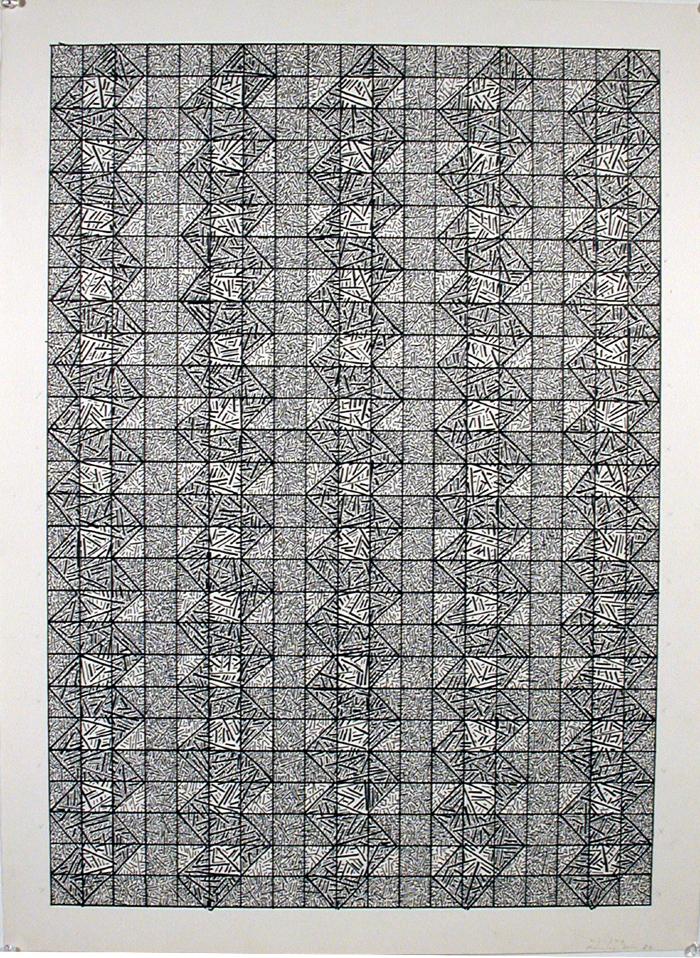 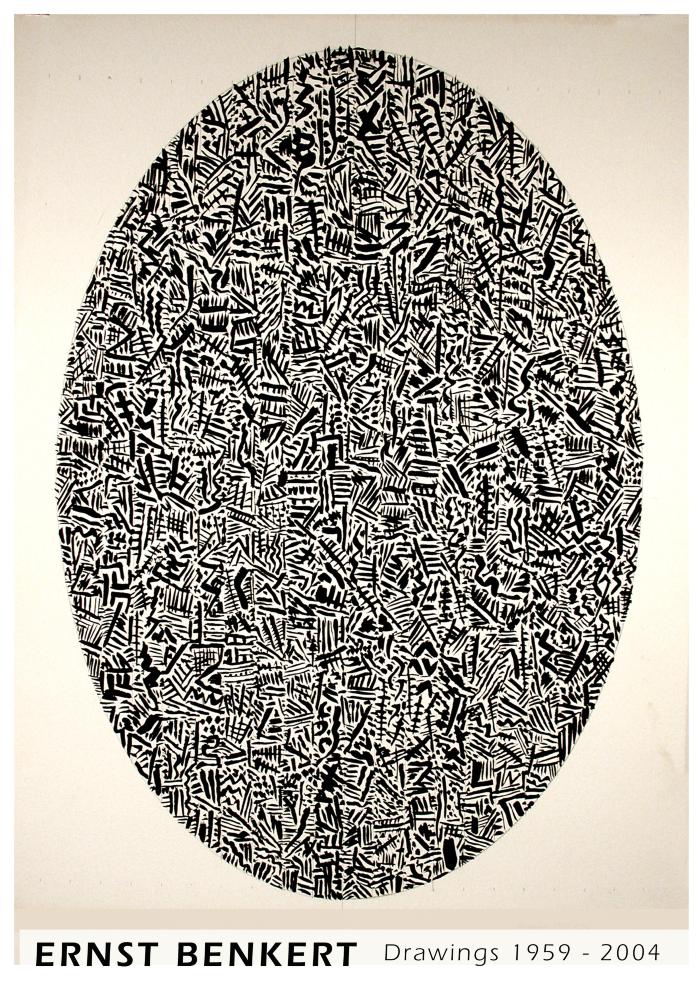 "Why do I draw? To make flat what is spatial, still what is moving, quiet what is noisy."
Ernst Benkert (1983)

This exhibition represents only a fraction of Ernst Benkert's prolific four decade-long career. Yet, in it you'll see that the optical and aesthetic possibilities are endless when an artist truly pares down and perfects his working process. From his beginnings at Oberlin College in the 1950s (represented here by two drawings of thickly contoured forms from 1958) to the present (a series of his "tomb" drawings made in the last decade), Benkert ever delights in and experiments with ways to fill a space with a mix of order and chaos. For most the intervening years, this translated into compositions based almost exclusively on the grid. There are closely spaced parallel lines that create a kind of flickering light; playful and primitive glyph-like lines that march up and down in columns; bands of solid painted colors; and there is an ever deepening darkness built up solely of crossed and re-crossed lines. Never are we disappointed that Benkert works only in black and white. When he places a single thin black line between two denser borders as in "Zig-Zag," our eyes play tricks on us and turn that thin line into a greenish blue. Benkert seems to be telling us that by changing the character, weight, density and location of straight lines in a grid he can make negative space come alive. Of late, Benkert appears to be going back to the more discreet, solid forms he began with all those years ago at Oberlin. His previous structures, all scaffolding and matrixes, are now moving into something more singular and solid, and ultimately more psychologically assertive. Had Benkert not invested so many years in working the grid, the economy that is the "Cenotaph" series wouldn't pay off. But it does. More than being a single, mysterious, empty container (as their title "which mean tomb without an occupant˜ might imply) they are, in fact, proof of something that is evident in all of Benkert's work: That a good drawing is, no matter how seemingly basic, much more than the sum of its parts; and that the ways that black meets white are infinite.
—Sarah Schmerler

In conjunction with Ernst Benkert's "Travel Desk," an installation at Proteus Gowanus - November, 2006