Tamiko Kawata, Beyond Lines, Beyond Surface 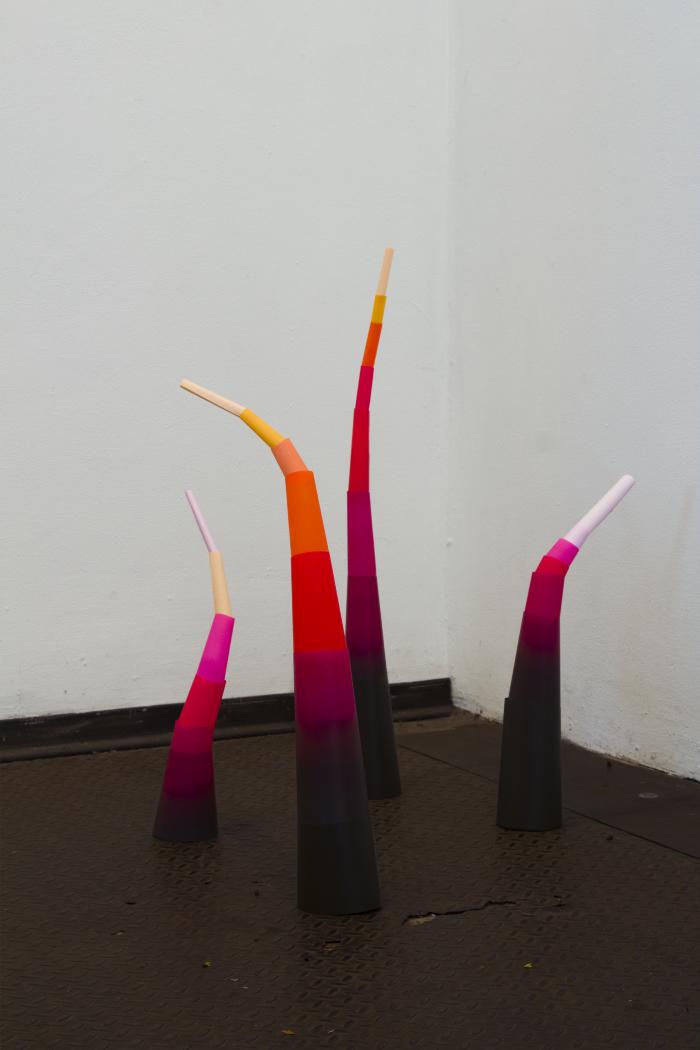 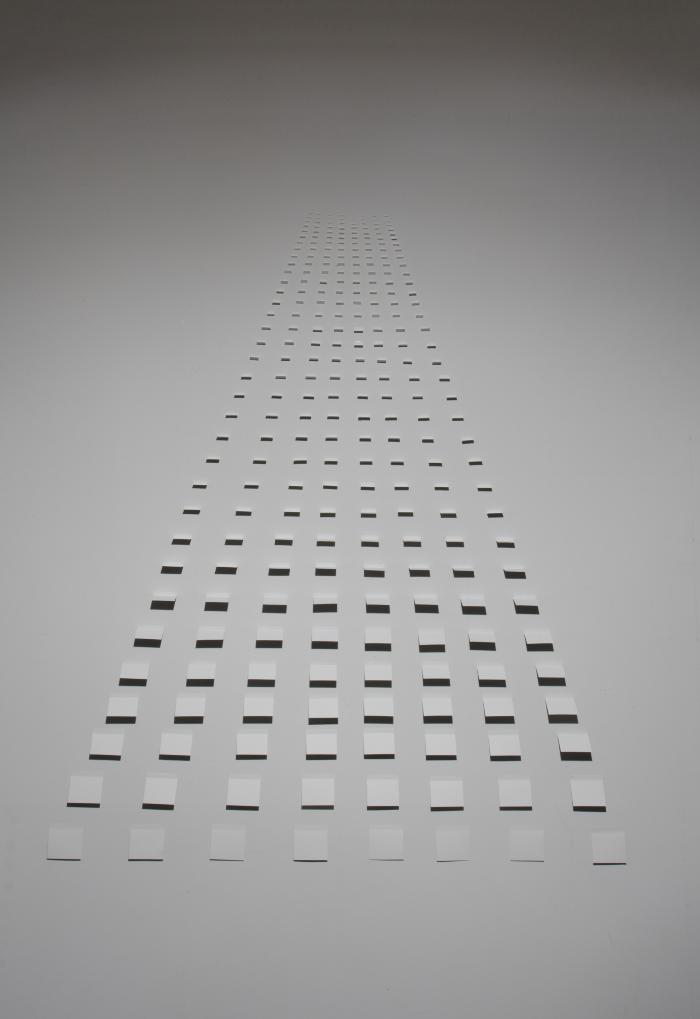 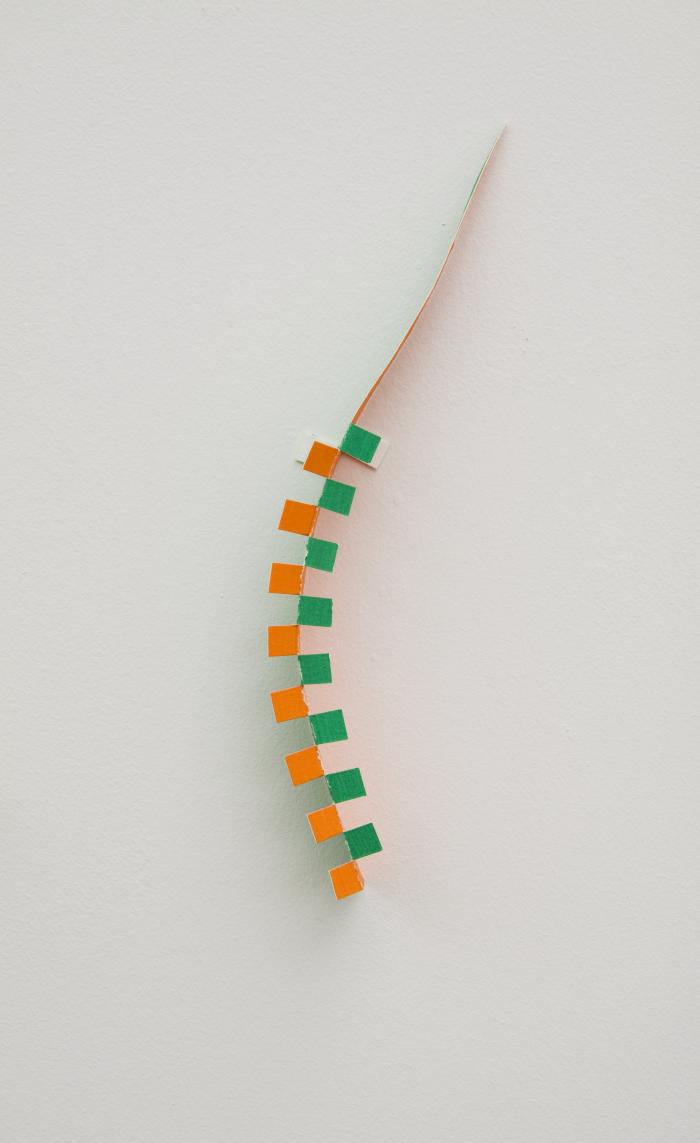 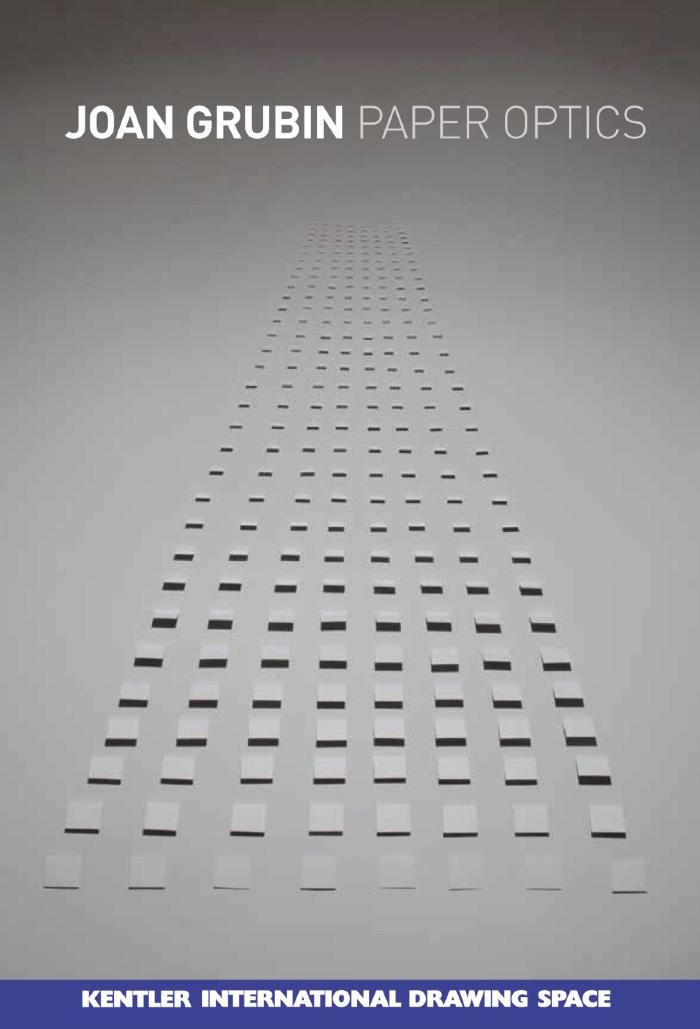 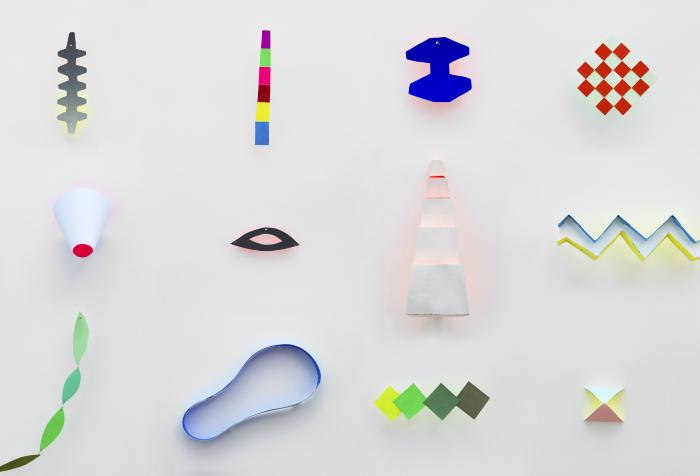 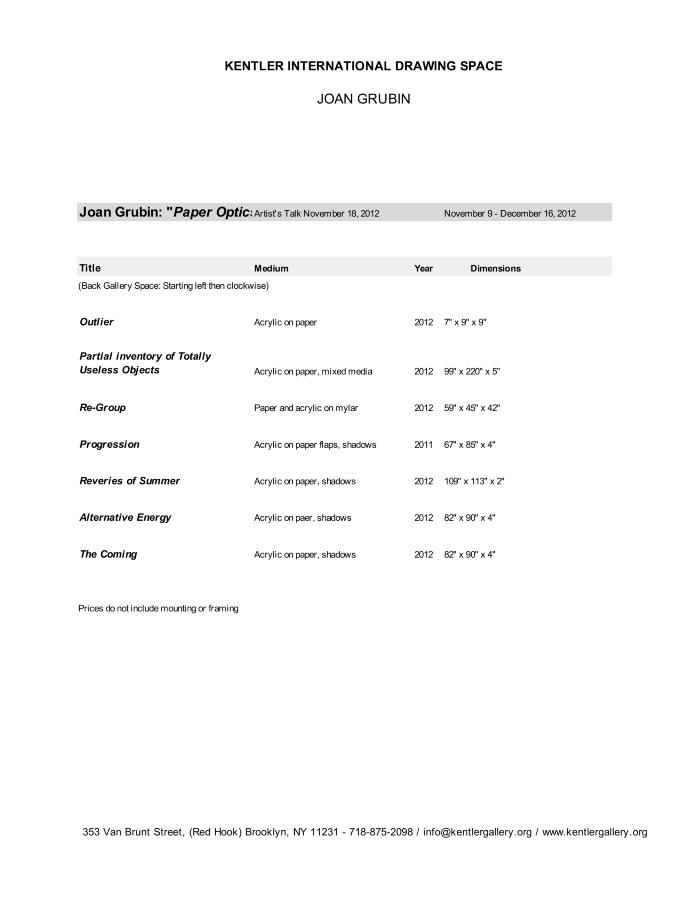 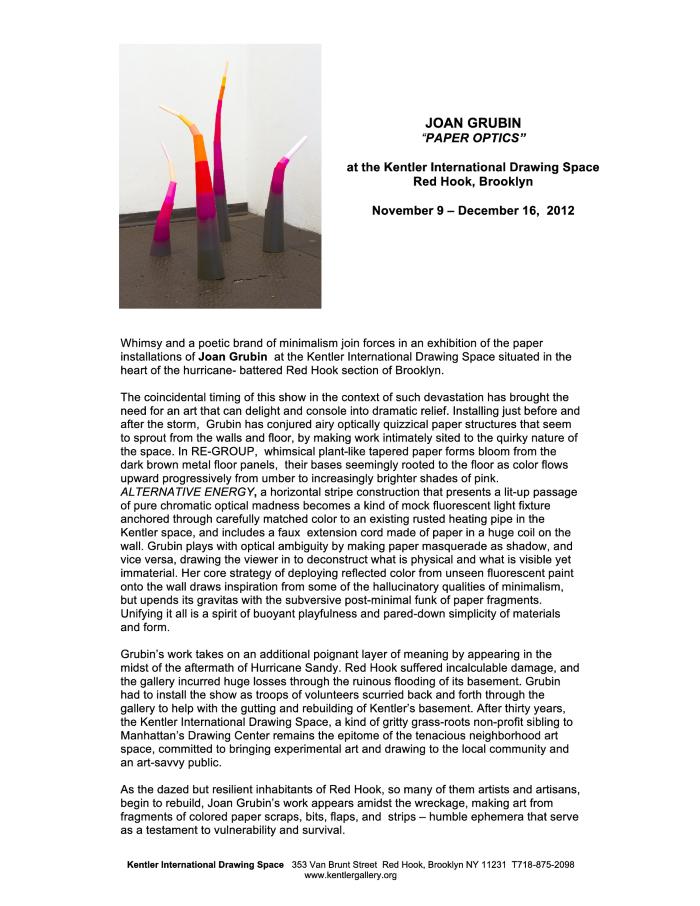 Joan Grubin said she doesn’t know if she should call her work ephemeral or not, pointing to an imposing, if also delicate looking piece affixed to the wall of her studio. It’s been up for five years and seems good for many more. A prototype for another work called Exhalation (2007), it is made of paper, the style abstract, graphic, hallmarks of her practice. Consisting of a pattern of lozengelike shapes that seems flush to the wall when looked at straight on, the diamonds are in reality curved outward, their three-dimensionality quite visible from a profile view. It increases in volume toward the center of the overall composition, then flattens out to recede into the plane of the wall. The diamonds are constructed from narrow bands of painted paper set closely together. Tinted by the reflected color of the otherwise unseen fluorescent orange and yellow paint of their undersides, the intervals of space between them appear as substantive as the paper, another optical finesse. But Grubin is full of them.

Paper is usually fragile and for much of its history as an art material, at least in the West, it has been relegated to the category of craft. Even drawings were considered a minor art, an adjunct to painting or sculpture although cherished by the cognoscenti. But now that most traditional hierarchies have been upended, criteria diversified and the art world globalized, paper, too, has become much more widely appreciated, its possibilities greatly expanded. Grubin, whose elegant works are based on the fine, fugitive effects of color and its reflections, is among those artists who have dedicated themselves to an exploration of the medium’s potential and versatility.

The composition is often a grid or semblance of it in works such as A Partial Inventory of Perfectly Useless Things (2011) and Reveries of Summer (2012). The shapes are also neutral, without inherent expressiveness, something Grubin prefers in order to focus on an experience of pure perception that arises from the subtle interplay between form, color, light and shadow, her chosen lexicon. Light and space are recruited as collaborators, the work determined by the parameters of the physical environment and the changing sources of illumination. Albers’ color studies have been a major influence on Grubin as have other artists, such as James Turrell and Robert Irwin, whose practice, like hers, is rooted in the psychology and phenomenology of the perceptual.

Not all her work is geometric. Some of her components are more organic—such as the little pod shapes that could be miniature vessels in The Coming (2012), their colored interiors surrounded by a soft red that produces a blur, the work in its entirety seeming slightly out of focus, reverberant. Created out of strips, cut-outs and constructed shapes, her assemblages are a hybrid of painting and sculpture or sculptural relief, a good example of which are wall displays like A Partial Inventory of Perfectly Useless Things mentioned above, consisting of a miscellany of small, evocative, unidentifiable but appealing objects full of folds, angles, curves, painted and reflected color.

Grubin’s production, although made in her studio, is site-specific since it is installed in situ and contingent on the venue. She is utterly meticulous and acutely sensitive to the exhibition space and its architectural elements from the height of the walls, the shades of its whiteness to the kind of floors and ceilings. Above all, it is the prevailing light conditions and its impact on the exact value and color of the cast shadows that matter as she attentively searches for the maximum ambiguity between what is physical and what is optical. Always in progress, each mounting requires careful tweaking, the installation adjusted, expanded or contracted--and each is unique.

Grubin plays with recession and advancement, flatness and dimensionality through gradations of colors warm and cool, complementary hues, afterimages, and much more. The result, as previously noted, is a kind of tantalizing trompe-l’oeil in which reflection and substance are merged, confused, the physicality of the work both dematerialized and reinforced. In Grubin’s resolutions, what you see is what you see—but also not quite. These are provocative visual conundrums that require time to take in, to distinguish the tangible from the illusion. Sophisticated, multivalent vehicles for capturing fleeting, successive perceptions, they captivate quietly.

One more of her feints is the quality of the cast colors. The trippy glow that radiates from them look electronic, electrified, or otherwise powered but they are, astonishingly, the result of just paper and paint, ordinary materials that Joan Grubin deftly, magically, wittily turns into visual poetry.