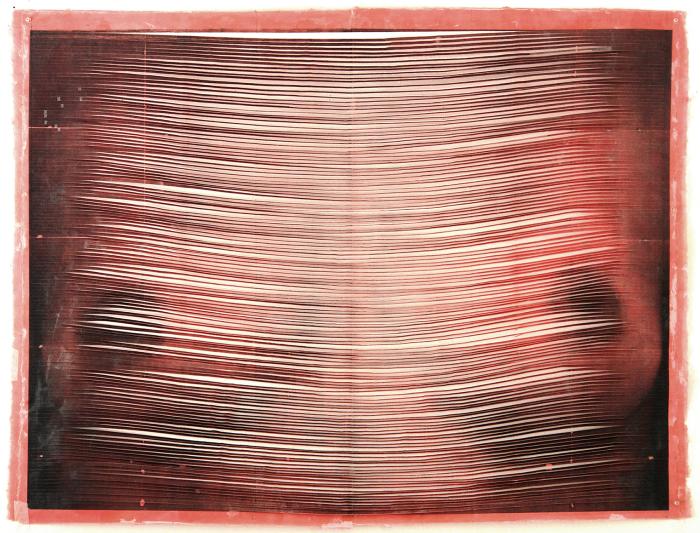 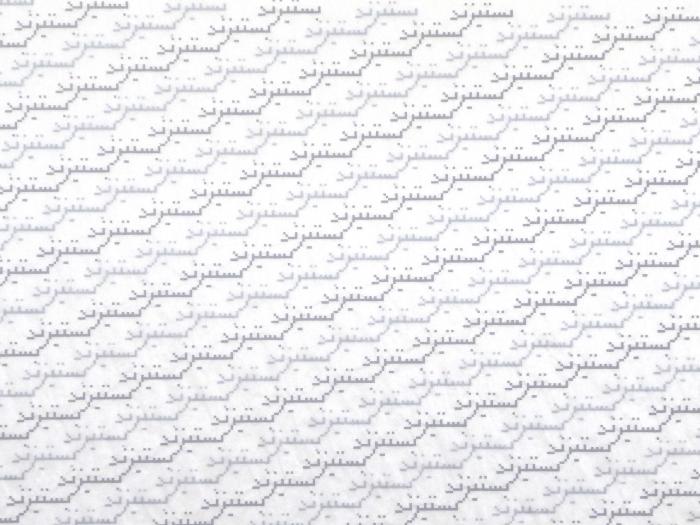 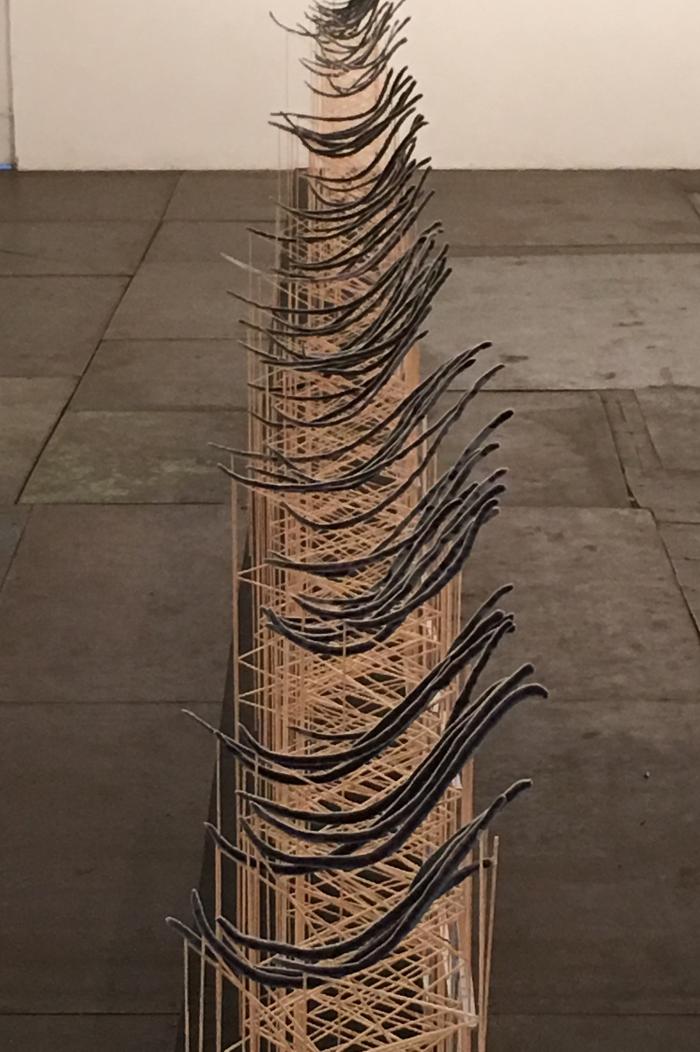 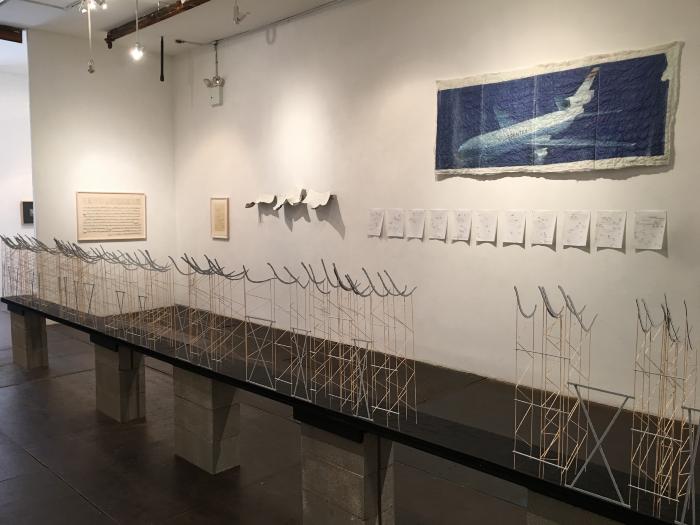 Perhaps All of The Sky Is Unable To Turn A Page Of This Tightness of The Heart, printed Japanese paper, batting, hand-stitched thread, canvas, 42” x 60” x 1”, 2013 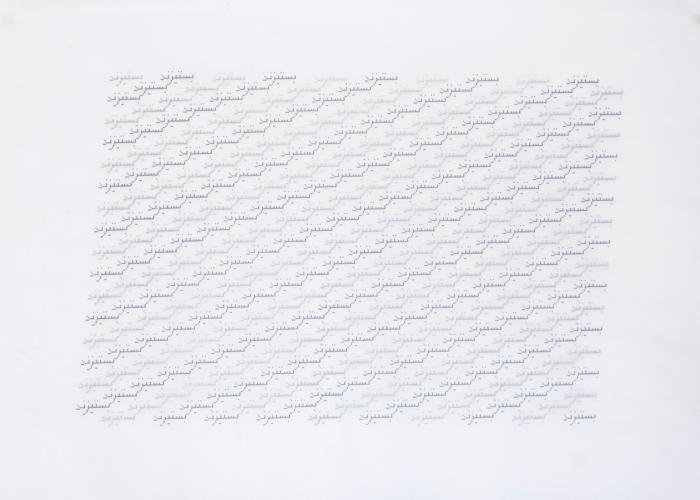 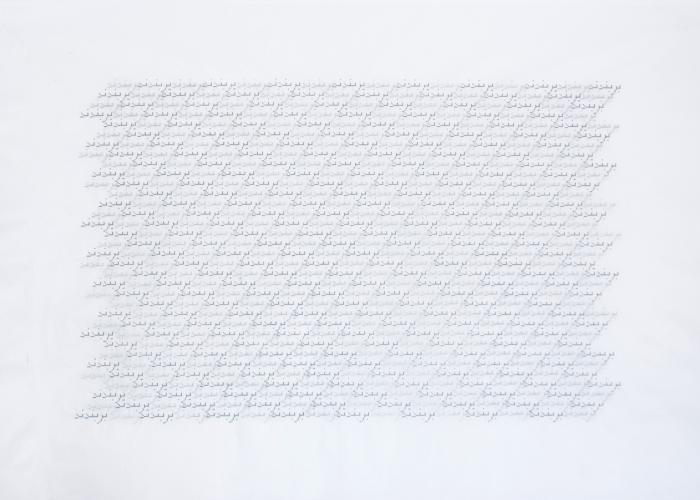 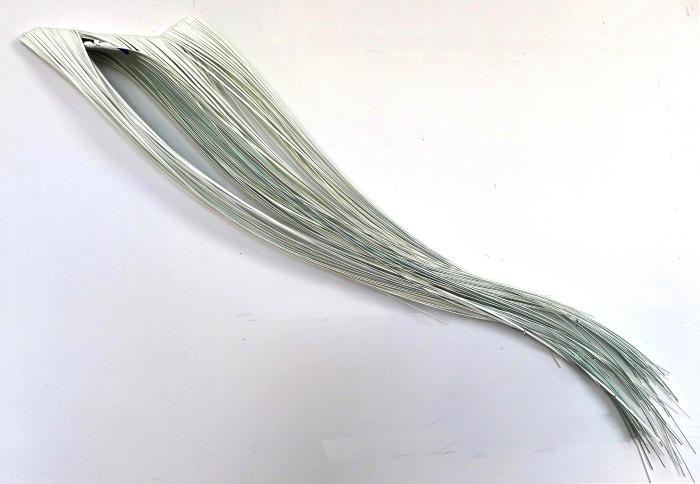 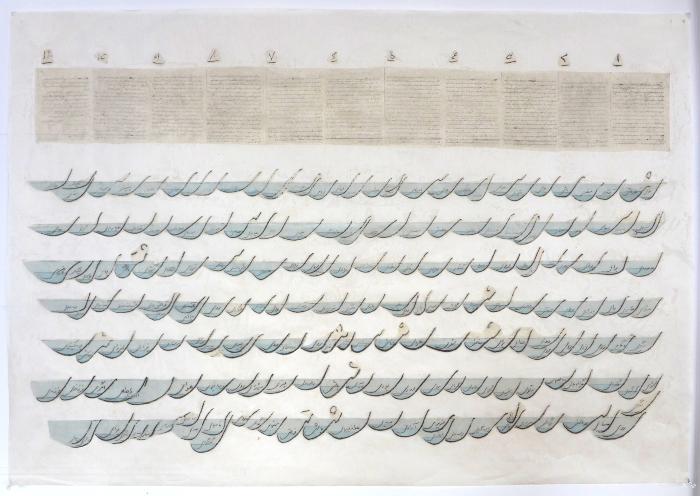 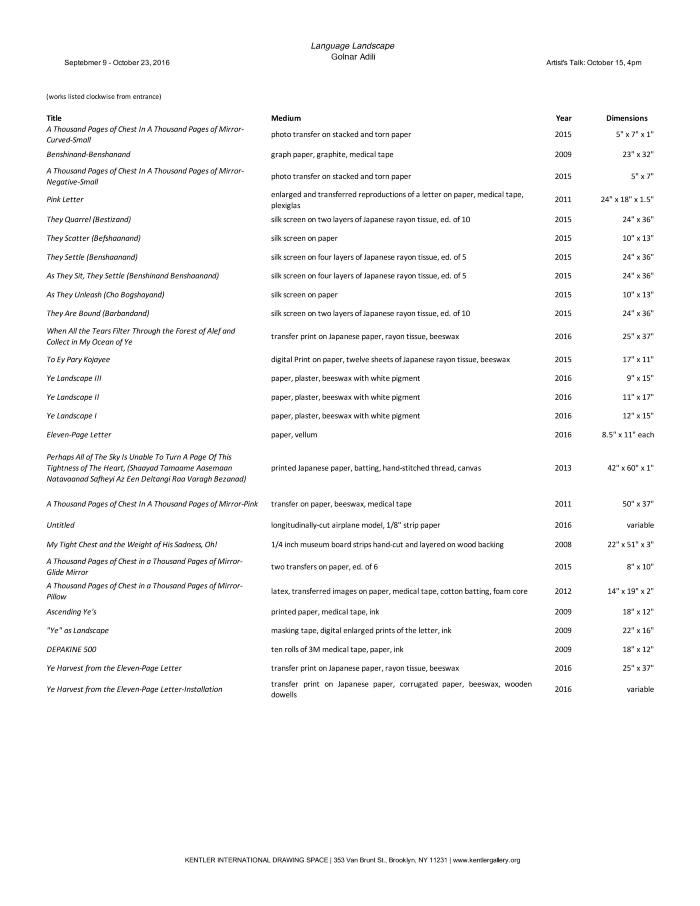 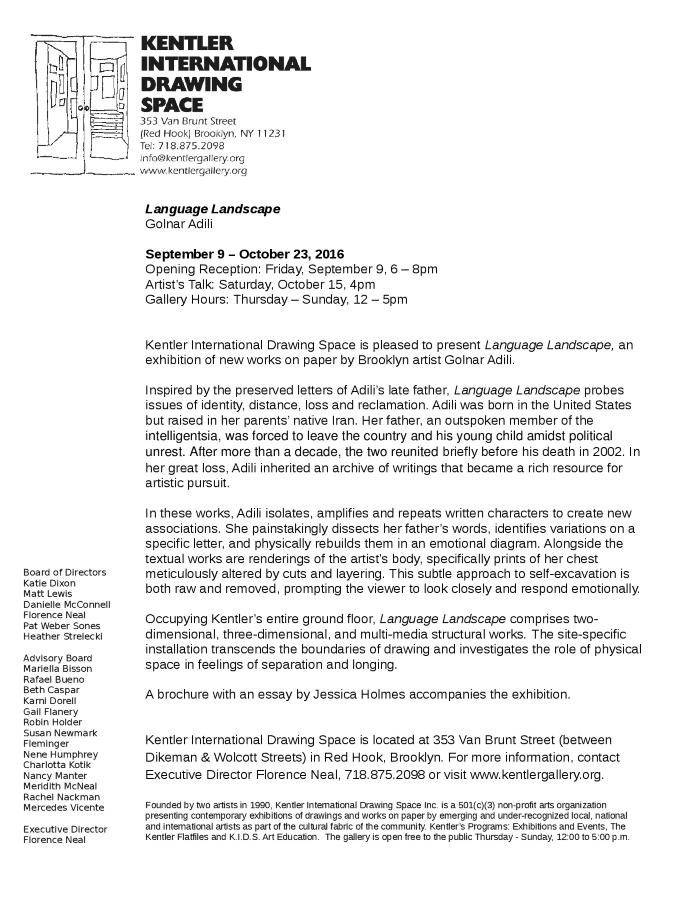 By nature, spoken words are ephemeral. Say them once and they disappear into the ether, to be remembered, perhaps, in your mind or the mind of another. But nothing palpable exists. One purpose of writing is to capture fleeting words, to bestow to them marks on a page, which in turn make up a language. But even this is not certain. If a letter is thrown away, or otherwise destroyed, if it is shoved into a drawer never to be opened again, do those words exist any longer? What do they take with them when they disappear?

Physical manifestation of the written word is a primary concern for artist Golnar Adili. There are reasons for this. She was born in the United States but had returned with her parents to their native Iran by the time she was four years old. Her mother and father were part of the Iranian intelligentsia, and were compelled to come home by the promises of the 1979 revolution. But in the wake of the shah’s overthrow, the Islamic Republic of Iran assumed control of the country and many public intellectuals were afterwards silenced through harassment, imprisonment, torture, or exile. Adili’s outspoken father, Mohammad Reza Adili, was forced to flee, escaping first to Madrid by way [JH1] of Kurdistan and Turkey, and then on to the United States[JH2] . His wife and daughter, unable to secure safe passage out of Iran, stayed behind, and thus began Adili’s protracted separation from her cherished father. Though she was able to see him for occasional periods of time throughout her childhood, the two remained apart until Adili returned to the United States to attend college. The reunion was relatively short-lived[JH3] ; Mohammad Reza Adili passed away in 2002, his life claimed by an aggressive cancer.

Left to his only child was an archive of a life. Adili found herself with a trove of letters (both copies of letters her father sent to others and original letters that he received), writings, and other documents. The papers were remarkably preserved and annotated. “He never burnt them, he never discarded them,” Adili notes. “He knew that these were eventually going to be seen by me.”[1] Much of the artist’s work has its foundation in these papers, one reason why it is capable of provoking such exquisite emotion. There is a gossamer quality to many of her drawings, which is not to say they are insubstantial, but rather spectral—the ghosts of her history continually pass through. This delicacy also suggests the fleeting nature that is so often characteristic of the stuff of our lives—handwriting, relationships, love.  Her work is suffused with a sense of longing.

“It’s really exciting for me to turn language into something spatial,” Adili says,[2] and by doing so, she grounds fugitive words in tangible objects with such assurance that it is unsurprising to learn that she has a background in architecture. Many of her drawings also comprise three-dimensional elements that push “drawing” to its outer limits, like the centerpiece of the present show, Ye Harvest from the Eleven- Page Letter, and its accompanying spatial study. In this work, Adili took a letter from her father’s archive—a passionate missive written to a lover late in his life—and extracted from it every ye, one of the few vowels in the Persian alphabet. Ye is also the alphabet’s terminal letter, which imbues it with a certain finality, yet its form is receptive, the shape suggesting a little spoon. In Adili’s print, every ye in her father’s letter has been extracted and transferred to the page in the same chronological order as it appears in the original. The “belly” of each ye contains the word in the letter from which it was excised, creating a sort of redaction of the primary source. Then, with Japanese paper and cardboard Adili enlarged each ye and affixed each individual letter to a dowel structure, keeping the same proportion of space between them that existed in the letter. Adili also considered line in building the structure, and each ye rises or falls in relation to the ones that come before and after it, just as a line of handwriting naturally rises and falls according to the hand making the marks. Sprawling across a given terrain, her construction suggests a sea of cresting ye’s.

In seeking to establish these lasting roots, Adili frequently looks to the body as a source of the substantial and returns often to the image of the chest. “My chest is tight,” is a Persian expression used to convey a sense of longing, and in the small but exquisite A Thousand Pages of Chest in a Thousand Pages of Mirror, her yearning is evident. Many of Adili’s works are inspired by Persian poetry, and the title of this one derives from a two-line poem by the contemporary Iranian poet Yadollah Royayee, which reads in its entirety:
A thousand pages of chest in a thousand pages of mirror
One body is finite, bodies become infinite[3]
[JH4] Here, she has taken an image of her own chest and transferred it to a sheaf of paper, precisely stacked. The center has been removed creating the “negative” that is framed separately, forming a diptych that manifests a physical image of heartache that will never quite vanish. The two halves of the work, like mirrors, reflect the poignancy of that absolute.

It is Adili’s certainty in this truth, that longing can never be overcome but can be grappled with that makes her art so compelling. Her multifarious and imaginative output whets the viewer’s curiosity about how she’ll next approach the ever-constant presence of grief, or how she’ll keep it at bay. It makes us believe that perhaps our own private sadnesses might be assuaged, or at the very least contended with. Adili’s work is sometimes a bandage, and sometimes a salve, and sometimes a wound left open to the fresh air. It is clean linens on a downy bed, but a bed you might take to in order to nurse an injury, or mend a broken heart. Above all, it is a human landscape, one that embraces and accepts both despair and possibility.

--Jessica Holmes
Jessica Holmes is a New York area-based writer who contributes regularly to Artcritical, the Brooklyn Rail, and others. She holds an MFA in art criticism and writing from the School of Visual Arts. Find her published work and other projects at www.jessica-holmes.net.

[3] Translation is the artist’s own.

[JH2]Note omission her of “by plane” which seemed unnecessary after “via horseback” was removed.

[JH4]Note full two lines as I have offset them here.